Compile Heart’s Galapagos RPG brand, which most recently appeared with Fairy Fencer F, returns with Omega Quintet. Despite being a new IP for the company, the game falls victim to a number of issues that have plagued previous titles, and it’s rather hard to see the appeal in a number of aspects the game brings to the table. Fans of the developer’s past titles will find plenty of enjoyment, but it’s unlikely that those not will be convinced otherwise by this particular entry.

Omega Quintet is set in a world where a mysterious force known as the Blare has swept over. The Blare creates an innumerable amount of monsters, and its spread has left only a nameless city as the last known bastion of humanity. Only one method has been found to protect the remnants of the populace, teenage girls who emerge as Verse Maidens, vanquishers of the Blare using skills oddly related to being pop idols. The game sees the transition over from the current solitary Verse Maiden, Momoka, who in her thirties is naturally suffering from serious stamina issues as is so often the way of JRPGs, to a new generation of five Verse Maidens. Players are put in the role of Takt, childhood friend of one of the newbies, who through various circumstances becomes manager and bodyguard for this new group of Verse Maidens as they go around beating up Blare-created monsters.

It’s understandable that the developer would want to ease players into the battle system, as it is a deep one. However, it would have been much more engaging to let players experiment and read up on the tutorial in their own time, rather than trying to drip-feed the information. The constant tutorials both aren’t as helpful as they could’ve been and only annoy to the point that they are soon skipped as quickly as possible. Once the incessant tutorials eventually stop and the cast starts to somehow combine to achieve its rare feats of slight competence, things do start to pick up a bit, but the game produces a painful first impression. 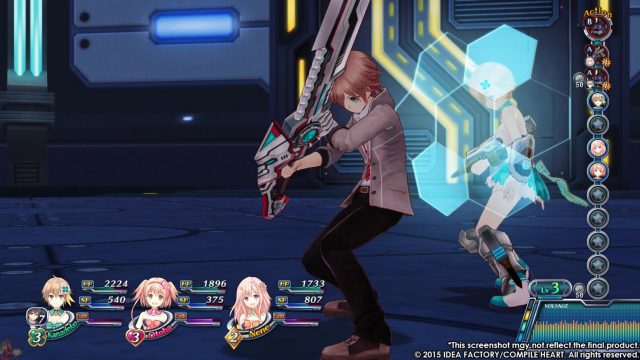 Standing in front of the shield matches the wisdom shown elsewhere.

When Omega Quintet actually allows people to play it, things get more interesting. The complete battle system is enjoyable, with a heavy reliance on combos and lots of tactical aspects to consider as in previous Compile Heart titles. Combat uses a conditional turn-based system, with the gap between turns of individual combatants affected by various factors, such as how many actions are taken on the previous turn. Each party member gets maximum number of actions initially determined by their weapon proficiency, with bonus moves awarded for various actions such as defeating an enemy. There are two types of skills, an elemental, magic-based set and a weapon-based set, with each character getting their own special weapon skill that can be used when the game’s Voltage Gauge is filled up through in-battle actions.

Two special options in battle are Harmonics and Live Concert Mode. Harmonics allows more than one character to act within a turn, the exact members based upon the upcoming turn order. This allows for both bigger combos with many more available actions and more powerful chain attacks, which occur when certain skills are used in order. Trying to get one or more of these is very often the best way for players to get past the tougher boss monsters, as the damage unleashed is often very high, particularly when chaining each character’s special skills. Live Concert Mode also makes use of the Voltage Gauge, but rather than unleashing an attack skill it provides a significant set of bonuses to the party. Although Takt is not directly involved in battles, he can still make a limited number of appearances in order to protect the Verse Maidens from enemy attacks or follow up an attack himself and delay the enemy’s turn.

The three starting difficulty options give a nice variation across the board. The normal difficulty gives players who just want to get through the game little trouble barring a few spikes towards the end, while the higher two provide the more traditional challenge that Compile Heart fans have come to expect. Unfortunately, there is no option to change difficulty during the game, so players who find they wish to change for whatever reason have to suck it up or start the whole thing over again.

The idiocy and general incompetence of the cast throughout events is a huge problem with the story, and it afflicts everyone multiple times except for one of the supporting members. It’s exacerbated as nearly all the drama and humour in the often overly long event scenes relies on these traits, making the majority of events and fact that humanity has survived this long seem preposterous. The story isn’t helped by the fact that the major plot twist is very obviously telegraphed. There’s a small amount of charm in the overall playfulness of the cast, but the moment it that arrives it quickly gets swamped by the aforementioned issues. The standard ending to the game is also likely to disappoint, with the true end clearly being what players should be aiming for, but not even that can save the story from the complete mess preceding it. 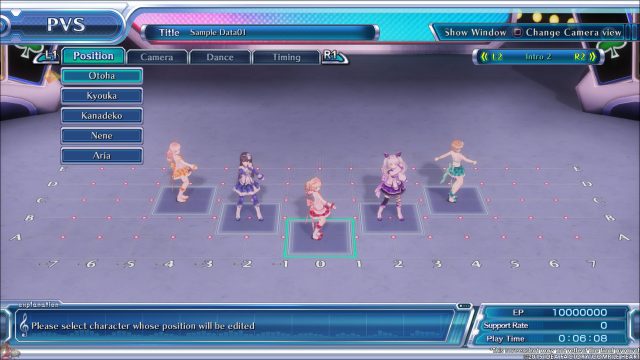 All of you, dance like you want to win!

Omega Quintet features a large number of side quests. Unfortunately, the quests themselves, despite having a decent enough variation in completion methods, amount to little other than filler and don’t really give players much desire to go through them outside of the promise of missing out on rewards and the game’s true end that requires a large specific selection to be completed. It even turns out that some of these side quests are integral to completion, and the requirements for getting certain ones to appear are not provided, which can put players in a near impossible position without outside help. As side quests become uncompletable immediately after the chapter they appear in, it can be easy for players to fail to complete many. It appears someone picked this up in QA, so the absolutely integral ones can still completed despite being marked as Expired in the log, but this isn’t readily apparent.

The game features a crafting system which, outside of battle drops and field items, is the primary way for players to get new equipment, costumes, and consumables. This requires players to disassemble other items and drops, and is quite fun to experiment with, although the limited selection of weapons is a little disappointing. Battles feature a clothing damage system, which serves little purpose other than allowing players to see the girls in their underwear and forcing a return to base to get the damaged outfit repaired. Omega Quintet also plays up its idol theme with a promotional video system (PVS), which allows players to direct the performance of a song with various dance moves, camera angles, and vocal combinations. It’s interesting enough to play around with once or twice, but doesn’t hold any real lasting appeal or provide any useful bonuses.

The J-pop tracks which appear in live concert mode, the PVS, and over the opening and ending credits that separate the game’s chapters are variable in quality. A few are very catchy, while others are considerably less so. The remaining music, meanwhile, is decently produced, providing a good backdrop to things but not really standing out. The English voice acting is in itself decent enough, but is fighting a hopeless battle against the fundamental story and character issues. Despite appearing on PS4, there is nothing that makes the game stand out visually compared to the vast majority of PS3 titles. The bright palette and style is almost identical to other recent Compile Heart games, doing the job but not really impressing, although the battle skill effects look decent. There is good variation in the enemies, even with the palette-swapping between chapters, and the location layouts are interesting enough to explore, although the actual location design is never very interesting.

As said at the start, Omega Quintet is a game with appeal to fans of previous Compile Heart games, but is highly unlikely to get many more on board. The battles and exploration are decent, but are completely overshadowed by familiar issues with the rest of the game. There are other titles from the company with more widespread appeal and less aggravating design decisions. 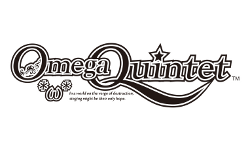