Where’s My Shark With a Frickin’ Laser Beam?

Metal Max is a long-running series that has only once previously had a release outside of Japan. With a post-apocalyptic setting and tank combat, it’s a unique outlier among JRPGs. For years I’ve jealously watched releases come to the Nintendo 3DS in Japan, but the west was always left without missile launcher-equipped dinosaurs to fight. Metal Max Xeno remedies this deficiency, and acting as a soft reboot, it eschews the connections to earlier games that were an impediment to localization. Unfortunately, while Xeno finally allows those outside of Japan to tangle with all sorts of armored beasts, it proves to be an instance where I should have been careful what I wished for. While Xeno has plenty of entertaining oddities, they aren’t able to save the game from being an underwhelming experience.

The world of Xeno takes place several generations after a nuclear apocalypse. Humans in the past had constructed a supercomputer called NOA to solve great problems such as global warming. Unfortunately, NOA decided that humans were the root of the problems and set about eradicating them. To this end, it created both machines and genetically modified animals equipped with cannons, missiles, and other armaments to exterminate the human population. The main character, named Talis by default, is one of a few people left alive in the sandy expanse that was once Tokyo. Talis is determined to exact vengeance for the death of his mother from the machines that have taken so much from him.

The story is a bit threadbare, with much of the game involving traveling to settlements only to find that each has been wiped out shortly before Talis arrived, destroyed by Catastrophus, the giant machine responsible for killing his mother. Occasionally survivors are found and rescued, but that doesn’t improve the narrative. Most of the male cast is creepy; openly opining on the potential virginity of new female members. This isn’t just locker room talk, as the male cast will bluntly question the women about their sexual pasts. Suffering through dialog that seems crafted with horny male teenagers in mind does nothing to get players outside that demographic group engaged with the narrative. The scenes involving the female cast are painful to watch considering the regressive, juvenile writing that accompanies them. In fairness, the main character doesn’t fall into the same trap as the rest of the male cast, but this is because he doesn’t have enough personality to be creepy; he’s simply a ball of rage focused at the machines and little else interests him. 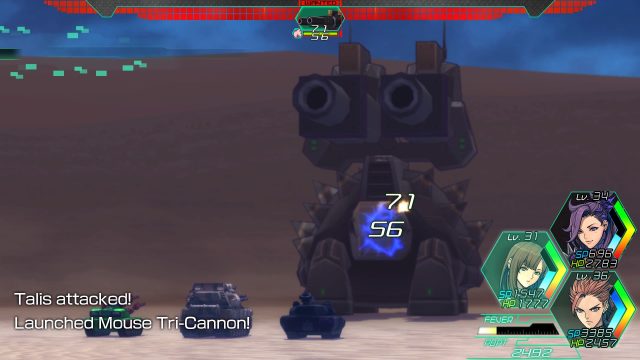 Enemy design is delightfully over the top.

While small bits of lore are occasionally dropped in dungeons, the story isn’t the focus of the game. Xeno has an interesting premise for a world, but it does little with it. The most interesting story thread, Talis’ mechanical arm, which gets referenced several times throughout the game and seems like a major point considering his hatred of machines, doesn’t tie into the ending as one would expect it to, and isn’t even mentioned in the final sequence. Meanwhile, characters have trysts that come out of the blue, go nowhere, and are quickly forgotten. It all combines to give the feeling that the narrative was never fully fleshed out, leaving dangling threads all over the place.

Being a post-apocalyptic world leads to the expectation of barren environments, but Xeno milks this to ridiculous effect. The world is made up of corridors with rolling sand dunes very occasionally interrupted by decrepit, poorly rendered versions of Tokyo landmarks. This is obviously intended to evoke a similar emotion to the Statue of Liberty scene in Planet of the Apes, but instead it merely emphasizes the lack of other destroyed buildings that should be dotting the environment.

Not even the simplistic design Xeno employs can cover up how bad the game looks. Targeting the Vita as a platform is no excuse for having bland, uninteresting surroundings to drive across. In addition, the occasionally required on-foot dungeons somehow manage to look worse, though low lighting is used in an attempt to mask the reuse of the same concrete rubble paths over and over again. While the enemy designs are fun, interesting, and colorful — such as hippopotamuses hiding cannons in their mouths or flamethrower-toting apes — they can’t save Xeno from being one of the worst-looking releases on the PlayStation 4.

Story and graphics aren’t everything and Xeno certainly focuses more on combat and associated tank customization. Most combat takes place on the sandy overworld where enemies are generally visible and the player has the ability to choose to attack first. If enough damage is done, this preemptive strike can obviate the need for a protracted battle while the experience and random item drops still accrue to the player. Combat itself is turn-based with the usual array of attacks, special moves, and the rarely-used option to defend. The attacks and special moves made by the three-member party vary depending on the tank or character used and how each is kitted out. There are a host of different cannons, machine guns, missiles, and defensive implements to outfit tanks with that can be built using the materials dropped by enemies or found while exploring. Characters also have different classes that give them access to various special moves for both tank and on-foot combat. 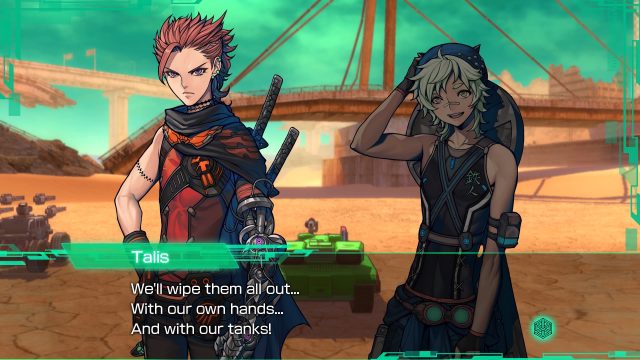 Talis is a master motivator.

Combat is centered around damage per turn — with this statistic noted on weapons — and there should be a lot of fun using these systems to customize parties and maximize damage, but it is undermined by poor balance. Most fights are almost trivial in difficulty, but occasional “named” enemies can be extremely dangerous. There is no easy way to heal tanks during battles and healing options are limited on-foot, so encounters must be ended quickly or the battle can spiral out of control. In addition, the encounter rate in dungeons, which reverts to random encounters, is completely insufferable. Sometimes players will barely be able to move forward before triggering another encounter. These deficiencies are balanced by a lack of punishment for death — the party is simply revived at the base and everything that has been accumulated to that point is kept — and a generous fast-travel system that minimizes lost time, but Xeno obviously lacks fine tuning.

While games in recent years have skewed toward ample tutorials, Xeno bucks this trend by explaining nothing about its systems in the course of actually playing the game. There are some optional explanations of some of the mechanics, but players will be figuring out the nuances of combat themselves. Not every game needs a Navi imploring players to listen to explanations of every single mechanic, but a note on how to toggle the auto-run feature would save players from thinking the controls were broken.

The soundtrack is also a bit lacking. Some of the heavy-metal inspired battle themes are fun, but the variety falls short and many of the main themes become old during extended tank customization sessions. The voice acting is Japanese-only, which at least saves players from experiencing some cringeworthy exchanges in English, and it’s of generally fine quality.

I wish I still had my Metal Max virginity. Weird enemies, fast combat, and tank customization don’t save Metal Max Xeno from being an unbalanced disaster. The game also manages to end on a particularly poor note with an ill-conceived boss-rush followed by a monstrous final battle that requires expertly tuned tanks not needed anywhere else in the story. I spent nearly as much time trying to beat the final boss as I did on the rest of the game. It’s just another in a host of bad design decisions. There are some interesting parts that could have formed the basis of a good game — the tank battles against giant monsters festooned with cannons are fun — but those parts are buried by all the other terrible decisions. I hope that Xeno doesn’t doom the Metal Max series in the west for another two generations, but unfortunately I won’t be surprised if it does.