Rideon’s Mercenaries series has carved out a consistent niche. Its sixth entry, Mercenaries Rebirth: Call of the Wild Lynx, doesn’t offer any surprises as it continues the series theme of no frills tactical RPGs that nonetheless hit the right spot for fans of the sub-genre. Offering a tight experience, it works well as an entertaining way to while away some hours and keep one’s brain engaged without being particularly memorable.

Mercenaries Blaze’s story is told through short pre- and post-battle cutscenes that detail the exploits of main protagonist Irvin. An experienced solo mercenary, Irvin comes across Princess Kiera and her two bodyguards, who are fleeing after the king’s sudden death has seen his concubine and Kiera’s stepmother, Rosa, seize control in a bid to ensure her son Kyle gains the throne. Irvin joins up with the group, and they establish a new mercenary company to make ends meet and assist the people while Kiera explores options to overcome Rosa’s tyranny. 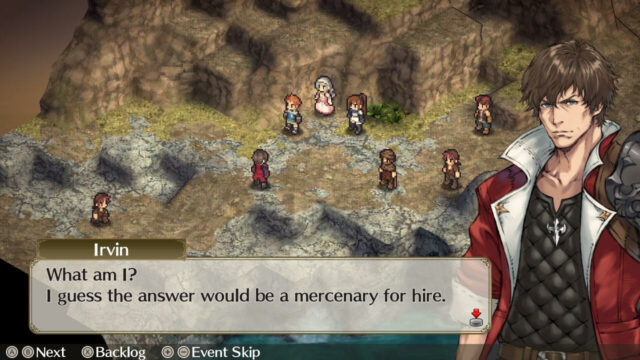 I don’t think there’s really any guessing about it.

The story never tries to do much more than set up the next fight. To that end it succeeds, but it is ultimately forgettable and treads incredibly familiar ground. There are very few — if any — surprises; while the characters are distinct enough in their personalities and motivations, they never step out of being straightforward archetypes, and the antagonists do very little to make things interesting. The localisation is fine; there is evidently not that much nuance to convey in the original text, and the occasional typo doesn’t affect the enjoyment and can be readily overlooked.

The primary appeal of the series is the classic isometric tactical combat and unsurprisingly that’s also the case for Mercenaries Rebirth. It follows the traditional turn-based structure with player party members taking their turns — each getting a certain amount of movement and one action — before the opposing combatants may act. There is the regular assortment of melee, ranged, and magic-based fighters, and elevation is only used to determine whether a character can move or attack through it rather than conveying any bonuses. Bonuses are present, however, for attacking from the side or behind.

Combat fulfills its role ably and moves along quickly as far as tactical RPGs go. It offers a perfectly enjoyable experience without any major annoyances but also doesn’t do anything to stand out. Enemies can be a bit passive, but will be smart enough to try and eliminate the weak characters when given the option. Rather than starting with a maxed MP pool, characters gain MP each turn and are able to select which level they use spells and skills at, adjusting the power and MP cost, which is a welcome touch. 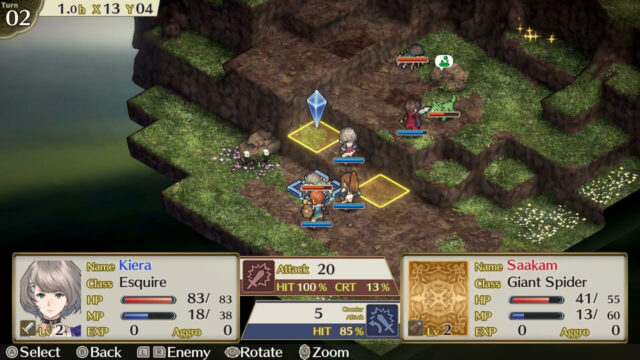 Combat remains perfectly enjoyable for the duration of the game.

In addition to the story battles, there are plenty of optional battles, which are used to level characters as well as earn money and unique equipment. These extra battles are needed to bring the party in line with the recommended levels, but they don’t feel like a chore thanks to the useful bonuses. In addition to the basic leveling system, which grants experience points for any actions taken offensively or defensively, characters earn SP at the end of each battle to spend unlocking and upgrading combat skills. Each character has a class promotion tree with two options for the first promotion, and each of those has two further promotion classes. Certain classes require that players first obtain a specific item before they can be unlocked, but characters can change class at will, and all skills from unlocked classes are available regardless.

Mercenaries Rebirth also comes with a standard equipment system. There are unique items as well as magic variations of regular items, which provide passive bonuses such as elemental resistances. These work with a rudimentary crafting system, which allows players to combine a target item with a magic item and transfer the modifiers from the magic item to the target item for a significant monetary cost that prevents it from being as useful as might be hoped.

The game’s sprite-based graphics call back to the Final Fantasy Tactics era and are another area where the game performs its duty as much as it needs to but not any further. The animations are fairly basic, and it never tries to impress with its visual effects, preferring to keep things clean and functional, though its character art is undoubtedly pleasing. The audio is entirely forgettable but provides a welcome enough background and never gets annoying. 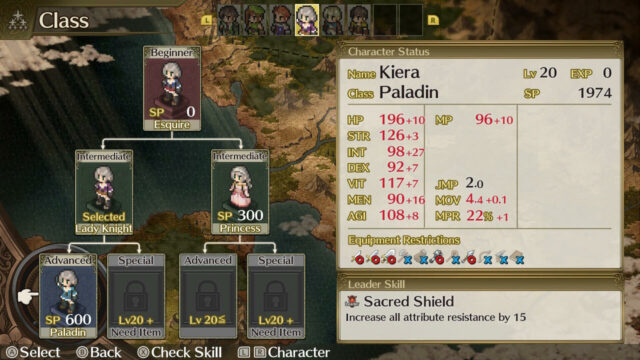 The character growth systems have enough to be engaging even while not being particularly deep.

Replayability comes in the form of harder difficulties unlocked once the game is completed, which offers the opportunity to test out other promotion options and the solitary story route split that comes at around the 70% mark. The extra challenge is really the only noteworthy part of the game, as the additional class options don’t provide enough of a noteworthy change to how the character performs and, though the route split does change two of the party members, the story is largely an excuse. The initial playthrough can be done on easy or normal mode and should take most players around a dozen hours to complete.

Mercenaries Rebirth: Call of the Wild Lynx achieves what it sets out to do, even if those ambitions are very grounded. Those who have played the series before will know what they’re getting here. It’s tactical RPG comfort food, offering players a straightforward opportunity to relax and to keep their brains ticking over.