This Is the Dawning of the…

If it wasn’t already clear enough that The Legend of Zelda: Breath of the Wild was a great success for Nintendo, one can simply point to the fact that it is getting both a prequel and a sequel. While the sequel is expected to be more along the lines of its predecessor, Hyrule Warriors: Age of Calamity sees Koei Tecmo’s Omega Force team once again putting its Musou hack-and-slash spin on the series, though with a more constrained story set during the events of the Great Calamity. The result is largely what one has come to expect from these crossovers: another strong entry that has plenty of appeal but never steps far from its comfort zone.

Though it’s perfectly fine for those who haven’t played Breath of the Wild to dive straight into Age of Calamity, fans of the former will get the most out of it story-wise. As mentioned, the game takes place a hundred years before the events of Breath of the Wild, when Calamity Ganon returns to try and destroy Hyrule. In Breath of the Wild, this necessitates him being trapped within Hyrule Castle but, without wishing to spoil too much, Age of Calamity’s story is rather more complicated than simply telling how that came to pass, hinted at early on through the activation of a small Guardian with the power to travel back in time who plays an important role in subsequent events.

Though it’s not a simple expansion of events, there’s not actually a huge amount to Age of Calamity’s story, with many of the important details simply informed through pre-mission narration. However, there is a decent amount of engaging cutscenes and a largely enjoyable cast of characters. It’s certainly appreciated that Zelda gets to take the role of main protagonist and the largest amount of characterisation in the game. The mission-based structure removes much of the discovery and traveling process of the Zelda series — and all of its puzzle-solving elements — as the party hops around Hyrule generally searching for other allies, important locations and items, or on rescue missions. 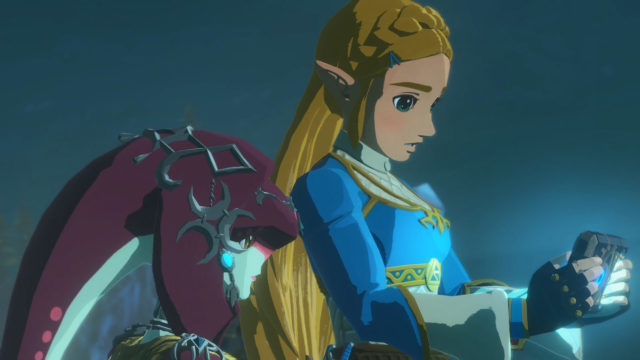 Giving Zelda the main protagonist role is a welcome part of Age of Calamity’s story.

Musou games are all about wading through masses of enemies to reach objectives and boss fights, and things are no different here. There’s less of a focus on capturing enemy bases than previous Musou titles and more on defeating the larger, more powerful foes that pop up throughout. Players can have up to four controllable characters available during a mission, though many missions and sub-missions reduce that to one or two. Characters can be switched on the fly or given basic orders such as to go to a specific place on the battle map.

The controls will be readily familiar to Musou and action RPG players; the majority of button presses are for combos using basic and strong attacks, with single-button block and dodge options primarily only needed on the highlighted foes rather than the regular fodder. These foes encourage well-timed dodges for their attacks, with success granting a Flurry Rush counter-attack combo. Special abilities come in the form of limited-use elemental rods and four special abilities based on the runes from Breath of the Wild, including Cryonis and Magnesis; while special abilities can form a regular part of the arsenal, they are best used as counters to the tougher foes’ own special abilities, with a visual signal given to identify which one to use. Further strategy in combat against more powerful enemies comes from attempting to reduce a break meter, which appears after they use certain attacks or are hit with special abilities. Once the meter is broken, players can unleash a finishing move that wipes away a large chunk of health.

It’s a relatively straightforward but highly enjoyable combat system, made more interesting by the different ways each character controls. Link naturally has his sword-and-shield combo, but also has access to two-handed swords and clubs as well as spear weapons to offer additional styles, and though the other characters are largely limited to a single weapon type each, the differences in how they fight make it interesting to mix it up every now and then. Enemies, however, do get very repetitive, particularly towards the end when the game’s main trick is to provide different elemental versions of each of them. 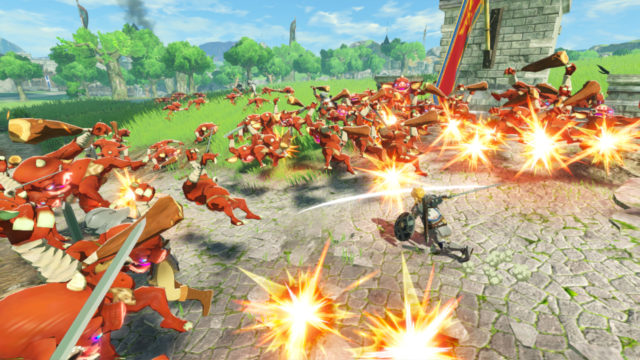 Attempting to add further elements to gameplay are sections where players get to control Divine Beasts, giant constructs piloted by their champions. These all-powerful weapons are satisfying to deploy purely for the amount of chaos and destruction they can cause, but are annoying to control and it’s often hard to see where some enemies are. The Divine Beasts also don’t get nearly as much use as they could have, with only a few story and sub-missions between them, and none of the missions are hugely interesting.

Once players get access to the world map they are continually assaulted by numerous icons designating side-missions and a selection of facilities. Some of these offer fighting opportunities that provide rewards, including resources used to accomplish the supply objectives found at all of the other icons. These icons provide a variety of rewards, some enhancing the player’s fighters and others unlocking new shops. These further go towards percentage total for individual regions that may attract completionists; however, the sheer number of them doesn’t create any sense of appeal. As combat missions quickly become tiresome, the entire process feels largely like busy work for diminishing returns.

Character growth is largely straightforward, with a regular experience and level-up system combined with fairly simple weapon upgrade and loot systems. Thankfully, players do not have to grind each individual character’s level, as a training facility lets them spend rupees to level up to that of the highest character. Complete certain side missions provides some extra bonuses, like an additional attack on the end of combos or more health, but there’s nothing by means of customisation in terms of character build. 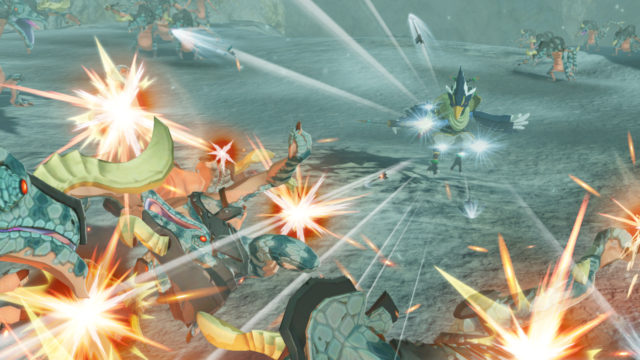 There’s a good variety of characters with different combat styles.

Hyrule Warriors: Age of Calamity absolutely looks the part. The visual style of Breath of the Wild works very well with the Musou combat and the animations throughout are smooth and look great. However, there’s enough recycling of environments and enemies to partly take the gloss off. The music and sound effects are enjoyable, though the voice acting is very variable. The script admittedly doesn’t offer too many chances to shine and some parts are performed well, but many feel stilted.

Hyrule Warriors: Age of Calamity is a strong title with plenty of appeal to both Zelda and Musou fans. The enduring gameplay strengths of Omega Force’s titles are present and its interesting approach to being a prequel ensures there is some narrative interest. It doesn’t deviate far enough from the formula to stand out among its siblings, but there’s a good twenty-plus hours of enjoyment to be had from the game.