Spirit of the Games

FORCED is hard. It is a challenging game for gamers who appreciate adversity, optimization, and hard-won accomplishment. All other factors in BetaDwarf’s first game pale in comparison with the sacrifices that must be made to the blazing crucible of victory. This is a game that will chew up Mary Milquetoasts and Johnny Jackanapes. On the count of ludonarrative cohesion, FORCED is a success. It’s a game about gladiators thrust into a meat-grinder of an arena where only the greatest will survive. Unfortunately, this challenge stymies casual solo play. It’s dangerous to go alone.

Story matters little in the drive for martial mastery. The story’s largest surprise — which will remain unspoiled for the curious — occurs during the introduction. From there, FORCED is a series of near plotless gladiatorial trials against a corrupt arena-master and his lieutenants. Hints of the world surrounding the arena, such as the history of past gladiators, Kickstarter campaign backers, suggest a grandness that never materializes. The arena’s backstory could have been a fascinating area for further exploration. Unfortunately, the limited dialog and ruined architecture offer nothing beyond a bare sketch. As a result, their stakes of death and glory remain tepid.

The tactical trials of the arena are more compelling than its narrative drama. Battle is a frenetic affair marked by enemies attacking from every direction. Brute force is rarely the proper response. Survival requires careful management of attacks’ cooldown timers and knowledge of nearby buffing shrines. Each gladiator is armed with a unique weapon, which determines the warrior’s statistics, moves, and ideal role: the Storm Bow, the Volcanic Hammer, the Spirit Knives, and the Frost Shield. Completing arena trials provides challenge gems to enhance the weapons. At set intervals, challenge gems unlock new ability slots, active abilities, and passive abilities. 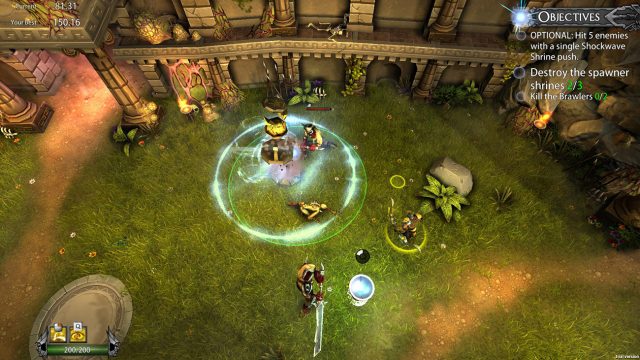 Charging headlong into battle is rarely a good idea. Especially with a bow.

All weapons share the ability to leave marks on enemies. As marks accumulate, certain abilities have greater effect. It can be tempting to shoot off a special attack as soon as a mob of swarmers appears; however, starting off with a few marking hits sweetens the chaos-to-be. Marks add to the ebb and flow of battle created by cooldown timers. As a result, combat is a tactical mix of harrying strikes and gladiatorial showmanship.

Bloodletting and ability management are familiar action-RPG mainstays, but FORCED‘s take on puzzles is unique. Balfus the spirit mentor accompanies the gladiators through their trials, providing dry wit and encouragement. He also interacts with the arena’s spiritual plane to activate switches, trigger traps, and interfere with certain enemies. Balfus can travel with a character, float in place, or bob merrily to where he’s called. In some levels, straying too far from Balfus causes damage. Getting knocked out of his aura of protection feels like a cheap shot, but does encourage new strategies to adapt to the risk.

Balfus sounds exactly like a spirit mentor and sidekick should. Despite the limited material he has to work with, he’s an enjoyable companion. He carries the entire dramatic weight for the game, since the protagonist is silent and the villains never progress past insults and exultations to smash puny gladiators. Grammar quirks further detract from full immersion. The gladitor movie score fits the brooding rest periods and tense action, especially during the final boss battle. One of the high points of FORCED is listening to the music crescendo, punctuated by Balfus’s encouragement, and letting loose with hard-won techniques to finally bring an end to… whoever it is that inflicted such torment on the gladiators. Whoever he was, he sure liked traps. 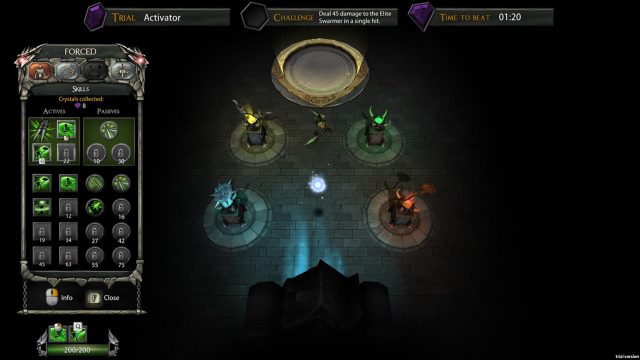 Gird yourself for battle, brave hero!

The sheer number of ways to die makes it difficult to tell how much of FORCED is unfair and how much is a series of lessons in avoiding dangerous situations. Precision is mandatory, and the controls aren’t always equal to the task. For example, it’s easy to get trapped in corners and mobbed by hordes of monsters. Certain tactics and attacks will decrease the possibility of being mobbed, but success also requires properly reading patterns. Identifying these patterns requires death and experimentation, which frequently become indistinguishable. The Wilhelm scream of death is a constant companion. A brother. A lover. A poet-priestess who whispers guidance as she swings the scourging flail. Survival is a challenge and a treasure.

Every trial contains three challenge gems. Unlocking the first gem requires beating the trial. The second gem is keyed to a trial-specific challenge, such as winning while calling Balfus a limited number of times or winning without healing. The third gem is unlocked through a time trial. Goal-oriented players will find advancement rewarding. Struggling to earn “just one more gem!” to unlock a new ability is a compelling system for squeezing the most effort out of a player. If a boss monster is too difficult, it’s possible earning more gems will provide the necessary edge.

Multiplayer unlocks an entirely new dynamic, and perhaps it’s with two to four players where FORCED really shines. The script displays the multiplayer bias by always referring to a group of gladiators, even during single-player mode. Network play isn’t as unforgiving as going solo, as players can focus on specific weapon builds and tactical roles rather than trying to cover for every eventuality. Moreover, bonus challenges can be completed even if a gladiator dies as long as one character is standing in the end. This isn’t to say multiplayer trials are easy: sharing Balfus requires communication, and the trials scale the monsters and objectives to the number of players. Nevertheless, sharing the burden highlights FORCED‘s strengths.

The notion of a future project by the same team, as teased during the end credits, is exciting. FORCED is a solid freshman effort that hints at even better, more consistent games to come. Completing the single-player campaign requires somewhere in the area of 25 hours. Completionists will be in for a longer haul, while those gifted with preternatural reflexes or friends will have a quicker, easier time. It’s a rough ride, but ultimately a fun one. FORCED is a twitchy thinker’s punch-drunk romp that wears its scars with pride.