Year of the Chocobo

Now here’s an interesting beast. It’s been just over ten years since Final Fantasy XII first made landfall. That’s not much, especially when one considers the series’ numbered entries have only just reached XV. It was the last single-player game in the series that I really had a good time with, and yet the intervening years have left a sour taste in my mouth. Having been ready to write off the HD remake without so much as a second thought, I was surprised to find myself quite enjoying playing through Final Fantasy XII: The Zodiac Age. Though it’s not a perfect game by far, its improvements will appeal to new players as well as those that appreciated it two console generations ago.

The story revolves around an underground resistance movement in the kingdom of Dalmasca, and takes place two years after its occupation by the Archadian Empire during the war against the Rozarrian Empire. The game’s cast of playable characters is one of the series’ smallest, comprised of only six permanent party members, three of whom make up the battle party at any given time, though large portions of the game see a fourth guest character join the party as well. Many of the characters are archetypes that we’ve seen plenty of times before: there’s the street-wise youth who unwittingly gets caught up in the resistance plot, the dashing outlaw pilot and his exotic co-pilot, the deposed princess and her disgraced protector. The supporting cast, however, provides a bit more variety to the mix.

Final Fantasy XII‘s narrative is one of the game’s weaker areas, though by no means bad. If anything, it’s too ambitious for its own good, lacking some necessary depth and context, since many past events leading up to this state of affairs are only ever mentioned in passing, if at all. This lack of context is one nitpick with the remaster; adding in some vital backstory and additional info, even if only in the form of a written codex, is one of the few things that should have been included this time around. The world is meticulously thought-out, from its fantasy technology to its supporting characters — like the armor-clad Judges of Archadia — down to its politics, mythology, history, and economy. Sadly, very little of this lore is capitalized on. As it stands, the game simply invites players to come along on the journey without doing much to flesh it all out. Still, it is excellently paced, with new developments constantly spurring players along. 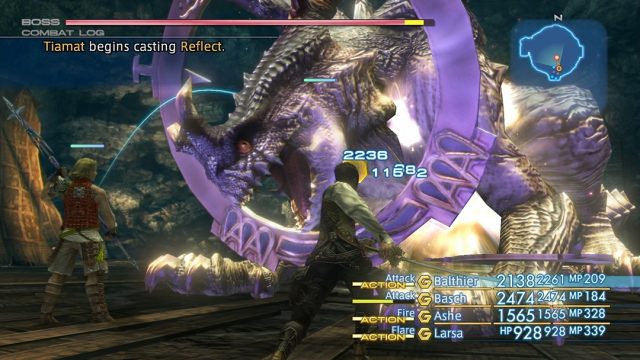 One area that is noticeably different from the original game is the Zodiac Job System, previously seen in the Japan-only release of Final Fantasy XII: International Zodiac Job System. This puts a new spin on the game’s character progression system of earning license points in battle, then spending them on the license board to unlock new magic spells, stats, techniks, and equipment options. Where all characters shared the same license board previously, there are now twelve unique license boards, representing the twelve available job classes. One of the constraints of this system is that a job cannot be changed once it has been assigned to a character; there is no changing on the fly as the situation dictates. At a certain point in the game, each character is able to choose a secondary job, allowing players to make use of every one of the available roles. This is a really neat idea, as it allows players to combine jobs that are usually polar opposites. For example, it is very possible to have a healer with the gear and stats of a tank, or a caster wielding a two-handed broadsword. However, since all choices are final, this can be a source of anxiety; it seemed like making some bad combinations could irreversibly cost the player the game somewhere down the line. Having this freedom is liberating and terrifying in equal measures. In the end, the game is playable no matter what jobs players assign, though some combinations will be better suited to tackle the game’s toughest optional challenges than others.

Final Fantasy XII‘s Active Dimension Battle system, love it or hate it, remains completely unaltered. Players are able to preprogram the AI of each party member to perform certain actions when specific conditions are met. These commands, known as gambits, can be used to handle everything from simple household chores like using a potion when a fighter’s HP dips below 50%, to more complicated setups as more and more spells and techniks are unlocked on license boards. There’s still the option of manually overriding the ADB system by inputting commands directly from an ATB-style menu. However, issuing a command to a character who has already initiated a different action resets the action bar, and often costs valuable seconds in the heat of battle. Many of the game’s tougher fights make constant intervention absolutely necessary, when conditions change and must be adapted to on the fly, and so it sometimes feels like fighting against the combat system as well as the enemies.

Having the option of making and changing gambits doesn’t always mean they’re necessary — oftentimes, easier battles can just be left to run their course. Character movement becomes an issue at times, since only one character is directly controlled. Characters under the AI’s supervision may move themselves too close to enemies, or trigger traps despite being aware of them, even getting stuck at corners or staircase on a few rare occasions. Gambits can just be turned off altogether, though this will turn the battle party into immobile damage sponges without constant player intervention. As the list of spells and techniks available grows, making gambits for every possible scenario becomes a sheer impossibility. Instead, having characters attack and heal on their own while leaving all other specialized tasks to the player is a viable option, though this can lead to characters failing to cast a spell or use an item to help themselves simply because no gambit was ever established for it. Leaving the more pedestrian actions up to the AI is nice, but this comes at the price of myriad little quibbles that make the game’s harder areas more frustrating than they need to be. 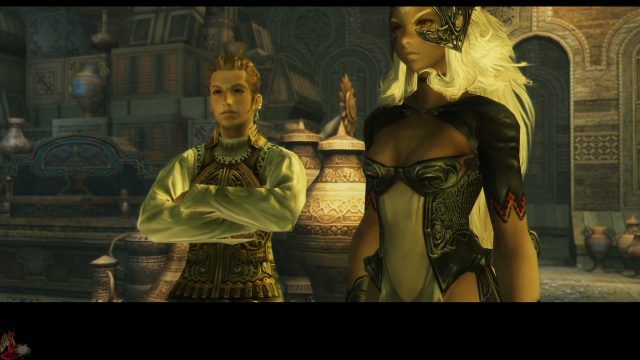 Character and world designs are memorable and detailed.

The convenience of setting low-level battles to auto comes into its own when participating in the large amount of side content the game has to offer. Accepting marks in the hunter’s guild is a sidequest that begins as soon as the game starts and can extend well beyond the point at which the story is ready to conclude. There are also thirteen Espers that can be found and defeated before becoming summonable allies, though a handful of them are part of the critical story path. A host of other, smaller sidequests appear throughout the game, typically netting useful items or equipment for completing them. In fact, there are several large areas of the game with their own secrets that players are never even required to set foot in. It is very easy to see hours and even whole days eaten up just fooling around with the side content and putting the story on hold. All of this side content comes at the price of a lot of backtracking while running into low-level encounters. Combining a gambit system set up to handle these on the fly with the new feature of speeding gameplay up by a factor of two or even four times by simply pressing a button makes these treks a breeze.

Final Fantasy XII: The Zodiac Age also includes several gameplay modes previously only available in Japanese releases. Trial Mode takes a snapshot of the battle party from a save file, including all current stats, gear, gambits, and even any guest characters currently in the party, and imports them into a standalone mode consisting of one hundred battle rounds, broken down into ten tiers of ten. This new mode has its own pros and cons. On the plus side, it is a great way to gather license points quickly. Bonus loot picked up in this mode carries back over to the main game as well. But it doesn’t take long before Trial Mode becomes tough as nails. Even an end-game party may only make it to the halfway point. Completing this mode is reserved for those who have the patience and skill to expertly manipulate the battle system. Clearing Trial Mode — and unlocking the game’s notorious Weak Mode that lets players start a new game with all characters permanently locked at level one — must also be done in a single run. By contrast, completing the main game allows players to begin a new playthrough in what was known in International Zodiac Job System as Strong Mode, a game mode that starts characters at level ninety and lets them progress from there.

Of course, this HD remake does boast improvements in both the visual and audio departments, with upgrades to textures and lighting, and a fully re-recorded soundtrack. Players do have the option of toggling between the English and Japanese voice tracks, and purists can keep Hitoshi Sakimoto’s original soundtrack should they choose, although there isn’t much of a difference between the two versions. It’s worth mentioning that, no matter the upgrades in the game’s presentation department, Final Fantasy XII looked and sounded damn impressive even back in 2006, and any improvements made here are on top of an already stellar level of quality. Each new location in this colorful world is more gorgeous than the last, and architecture is fantastically designed. The same can be said for the cast of characters, each one of whom is unique and memorable in their design. The voice actors are top-notch for the most part, with only a few caveats. A lot of dialog simply isn’t voiced at all, and some of the male character voices sounded too similar for my taste. Vaan’s voice, especially, can take some getting used to. But others like Balthier and Fran easily earn top marks, and listening to the different exotic accents of characters from different regions and races is a joy in itself.

The takeaway here is that Final Fantasy XII: The Zodiac Age is a game worth experiencing, be it for the first time or just for the first time in a decade. While there are touch-ups in the visual and music departments, the biggest positive change is the added Zodiac Job System, which provides unique license boards to characters by locking them into jobs. The meat of the game hasn’t changed noticeably, which is by and large a good thing, with a story that is well-paced and engaging if not particularly novel or as well fleshed out as it could have been. The Active Dimension Battle system also remains unchanged, and will continue to be a divisive factor among players. Ultimately, experiencing what the game has to offer, including its wealth of secrets and content intended to extend the endgame, is absolutely worth its learning curve.