The number of remakes and ports of Final Fantasy IV is quickly approaching record levels. In North America alone, the game has been released on the SNES, PlayStation, Game Boy Advance, and DS prior to Final Fantasy IV: The Complete Collection, but this PlayStation Portable title is the first to combine the original game with its episodic sequel The After Years. Its label The Complete Collection is spot-on, as it does give the entire Final Fantasy IV experience, but how does the nostalgia hold up and how well does The After Years blend in?

This package includes an enhanced version of the Game Boy Advance release of Final Fantasy IV, complete with the Cave of Trials and post-game Lunar Ruins found in that release. It also includes a two hour interlude chapter and the ten chapter compilation of The After Years. Players can choose to play the main game, the interlude, or The After Years at any time, though since nothing transfers between the three, picking which order to play makes no difference as long as the player is familiar with the source material. The interlude does little to bridge the two other sections, but instead seems to simply be a brief epilogue to the original story that cryptically hints at problems to come and ends up feeling rather pointless.

Since Final Fantasy IV has been made available in so many forms before, there is little new to add about its story. It still features a well-paced tale filled with all the melodrama and martyrdom seen many times before. One of the game’s strengths is its diverse cast and that is still a constant here. That strength extends to The After Years, as this sequel reintroduces gamers to the entire cast seventeen years into the future. The After Years is broken up into chapters, each of which focuses on the overall story from a different character’s viewpoint. The quality of each of these vignettes varies, but many of them are optional, which is helpful in case players get bored. Those who opt to play through all of these will not only see unique slices of the story, but will also be able to import character levels and items into the game’s final chapter. When The After Years finally comes together at the end, the story is haphazardly thrown together and does not provide the most satisfying of endings. What it does well is provide a lot of fan service for lovers of Final Fantasy IV in a way that is not forced, and holds true to the spirit of the original. Seeing old characters in a new light is delightful, as is the addition of new ones, but do not expect a lot of depth or development along the way. 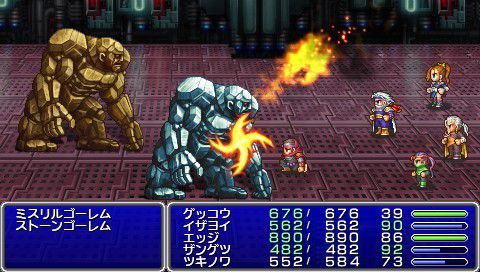 Both the main game and The After Years use the Active Time Battle system and feature the same style of character progression where only magic users gain new spells as they level. All other characters have unique skills that cannot be modified, but that keep them from being cookie cutter clones. While Final Fantasy IV proper does a great job of balancing out character development, The After Years suffers from frustrating pacing issues that cripple progression at times. This is most evident in the last section where all characters come together and many are drastically underleveled unless players opted to investigate the challenge dungeons available after each chapter’s completion to level up. So unless players decide to grind in the last chapter, party members are off balance and unlikely to be useful. That said, Final Fantasy IV is still a very easy experience, though the overall challenge is offset by The After Years, as some chapters are tougher than others. This is usually due to an imbalance in party members, such as situations in which key elements like a healer or heavy damage dealer are missing. Aside from this imbalance, the biggest challenge is in the final chapter which features two poorly-paced dungeons filled with over thirty bosses that take nearly as long as the whole of Final Fantasy IV to complete. Bits and pieces of story are scattered throughout, but not enough to offset the constant battles, making this a mindless end to what could have been much more.

Final Fantasy IV‘s gameplay remains untouched from the Game Boy Advance release, but The After Years does offer some variety for those who did not play it on WiiWare. Two new gameplay features are put into place: Moon phases and combat bands. Moon phases change whenever the player rests or after a set amount of time has passed. Physical attacks, black magic, white magic, or throwing skill can be strengthened or weakened depending on the moon’s current phase. This can make a huge difference in combat and adds an extra layer to strategy, especially in boss battles. Bands are a further implementation of Palom and Porom’s twin spells from the original game. Certain characters can combine skills to perform an advanced ability in combat. Except for a few granted automatically via story events, finding bands is a matter of trying to find out which combinations work through trial and error. While these are often very powerful, the strength of the bands is offset by taking up each character’s turn and requiring MP from both. Bands can range from two characters to the entire party of five, so there is a lot to play around with here.

There is one thing that plagues all three areas of The Complete Collection, and that is the encounter rate. At times, players might be able to make it through an entire floor of a dungeon without being attacked, while at other times encounters will occur every two or three steps, making exploring for treasure a frustrating experience. While Final Fantasy IV has changed little since 1991, The After Years shows some interesting innovations, especially in combat, but is not without some questionable design decisions elsewhere. Regardless, combat in The Complete Collection is still fast, enjoyable, and in some ways even more strategic than before, at least in The After Years. 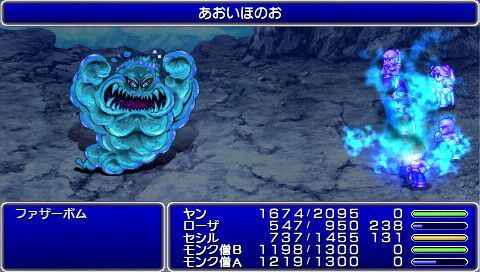 The After Years shares some similarities with the main game.

The Complete Collection might not be drastically different from prior incarnations in terms of story and gameplay, but it truly shines in the area of presentation. The soundtrack is available in the original style found on the SNES or with new arrangements. Lots of music is recycled from the main game to The After Years, but there are some new tracks from Junya Nakano that are solid enough to warrant keeping the volume on. The visuals, however, are a fantastic 2D revival. Character sprites have been completely redone, as have backgrounds, bosses, and the animations accompanying spells and summons. Some of the new characters, such as the four Elban ninjas, are wonderfully designed, making this a great retro throwback with splendid new visual content. Though it has not received the full 3D upgrade the DS version did, the visuals here work perfectly in 2D and are a vast improvement over the originals.

As someone who has played every version of Final Fantasy IV released in North America to date, it is easy to say that this version of the main game offers little new. The beautifully upgraded sprite work makes this pretty to look at, but does not add anything of note in terms of new content. The main draw of this package is having the whole of The After Years included. Well over twice the size of the original game, not including bonus dungeons, the amount of content offered is not in question. It is the quality of The After Years that is more difficult to judge, as the interlude chapter is completely useless. Fans of the original are going to find some aspects of The After Years painful to tolerate, but will likely do so in order to see their old favorites again. The After Years does recycle a lot of content from its predecessor, including fighting bosses like the Demon Wall three times, but its crazy encounter rate and poor pacing are new problems.

While there are issues, the nostalgic feel that exudes from this collection is nothing to find fault with, as it perfectly serves its intended purpose of being a retro collection. If paying for Final Fantasy IV again isn’t enough and the fan service-filled After Years holds no appeal, then pass on this. If you loved Final Fantasy IV back in the ’90s and are looking to relive that experience along with some new content, then Final Fantasy IV: The Complete Collection might just be a good fit for you.