Ten years ago the only sequel to a Final Fantasy game was a terrible anime titled Final Fantasy Legend of the Crystals. Given the length of time between the Japanese and North American releases of Final Fantasy V, upon which the aforementioned anime is based, the short animated series broke no sales records and claimed only the hardest of hardcore followers of the game series as fans. Over the intervening decade, numerous other titles have joined Legend of the Crystals as direct sequels to the beloved Final Fantasy sagas and, as of June 1, 2009, Final Fantasy IV: The After Years opens its first of four acts with a shining example of how sequels should be.

The tried and true ATB — Active Time Battle — combat system hardly needs an introduction. Used in game after game without end throughout both the 16 and-32-bit generations, ATB was one of the first well known attempts to remove the aging turn based setups that virtually every RPG on either the Nintendo Entertainment System or Sega Master System had given birth to. In the case of Final Fantasy IV: The After Years, the ATB bars and text menus have made their return, but with certain modest improvements; for example, when a character’s ATB bar fills and they are able to choose an action, the bar changes from grey to green to indicate readiness. The bar also fills a second time to indicate the amount of time before the the chosen action goes off. Although this change might seem very minor at first there are a few instances where keeping track of your charge time can mean the difference between victory and defeat; in one case there is a boss that will periodically become magically charged with fire energy and will counterattack your whole party if he is struck unless an ice spell is cast to “cool him off”. Yet one more addition to the battle system of The After Years is the ability to band your character’s skills together to form a more powerful combined attack. Although this has largely been adapted from Chrono Trigger, in the context of this first act of The After Years, it really doesn’t receive much screen time and comes across as a bit gimmicky.

One of the few completely new additions to the gameplay mechanics taken from Final Fantasy IV is what I will refer to as the Moon Phase System. Each time you rest in the inn, camp on the world map or at a save point, or spend more than thirty consecutive minutes playing, the appearance of the Lunarian moon will change in one of four possible ways. These moon phases — waxing, waning, full, and new — directly affect the battle system and dungeons in a number of unique ways; for example, certain enemies will only appear under a specific phase of the moon, hence, if you’re having difficulty with a dungeon it might be in your best interest to leave, camp, and re-enter to see which enemies do, or do not, appear. As for how the Moon Phase System affects the battle system, there are four types of actions that each character might have access to: white magic, black magic, weapon attacks, and character skills. Depending on the phase of the moon, each of these action types will have their effects increased, decreased, or left alone. To illustrate, under a full moon your basic weapon attacks will be weakened and black magic spells will be enhanced while white magic and character skills will remain unaffected; the phases of the moon also affect the corresponding skills of bosses and regular enemies as well, so if you come across a magic casting boss during a full moon, their attacks will deal extra damage, thus making it more difficult for you to win. 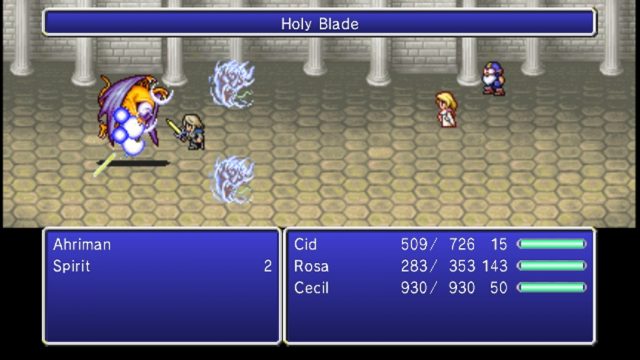 Old heroes but awesome ones

Aurally, the game has simply taken the original soundtrack to Final Fantasy IV, which gamers consider a magnificent classic, and ably remixed it. The songs retain their quirky 16-bit flavor but add occasional hints of composer Junya Nakano’s other works, primarily Final Fantasy X. The few new tracks on display in act one help weave the strangely dark story chosen for this sequel; in particular the theme for the mysterious female villain is both hauntingly beautiful and very much thematically similar to the Prelude that has long been the series’ calling card. In similar fashion, the graphics of the game retain the super-deformed sprite style and wildly colorful palette of Final Fantasy IV with nary a bit of out-of-place pre-rendered FMV to be seen in this first act. Meanwhile, much of the character art in the menu is obviously designed by series familiar, and fan favorite, Yoshitaka Amano.

Sadly, given the episodic nature of this game, the full scope of the play experience is impossible to summarize in a tangible way. What I refer to as the first act is, in fact, the Prologue and Rydia’s Tale, the first two parts of the game to be released. Act two consists of three more such pieces, namely Yang’s Tale, Palom’s Tale, and Edge’s Tale: act three contains Porom’s Tale, Edward’s Tale, and The Lunarian’s Tale; and finally, act four completes the game with a chapter simply called “The Crystals”. Speaking directly about act one, the difficulty is fairly average for an RPG of this sort, assuming you’ve previously played Final Fantasy IV and are somewhat familiar with how its quirks play out. Much like Final Fantasy V, there are couple of places where the difficulty will jump inexplicably from one area to the next. Generally this will necessitate a ten or fifteen minute period of level grinding, which should give some indication as to the rate at which you gain those levels in The After Years. The Prologue chapter runs roughly six to seven hours with Rydia’s Tale coming in at two to three more, which makes the entire first act a relatively easy stroll of ten hours or so, and by the end of that short run your characters should be levels ranging from 25 to 40. 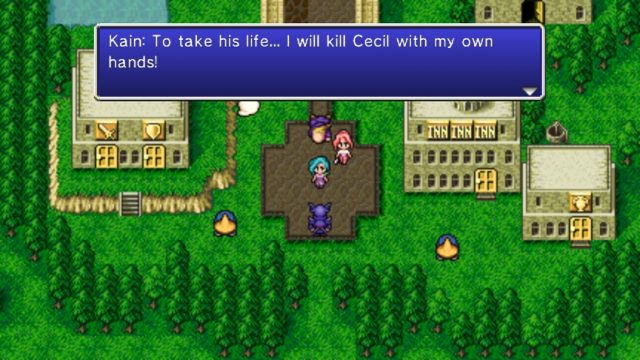 Being a sequel nearly always places a game at a distinct disadvantage regarding originality and story, however, Final Fantasy IV: The After Years gets around those story issues largely through its heavy reliance on nostalgia. Few if any casts of characters from the 1990s have managed to capture the hearts of RPGamers as strongly as the cast of Final Fantasy IV and getting to see them again, after such a long time, is like reuniting with old friends. Apart from the Moon Phase System and a few minor improvements to the ATB battle engine, there is little in the way of ingenuity or originality to be had from the game outside of the story and character development. As regards the story itself, the premise is a relatively tried and true combination of evil returning from its’ long slumber and a large number of smaller, more interesting plots. Act one has three main story arcs: first is the coming-of-age of Prince Ceodore, the son of King Cecil and Queen Rosa, two of the primary heroes in Final Fantasy IV. Of secondary importance are the personal journey of Kain the Dragoon and an attack against the Eidolons, Rydia’s long-time friends. The mysterious female villain demonstrates vast power by controlling the mind of the dragon, Bahamut, and the ability to summon monsters out of thin air; what her part in the overall story will be remains to be seen. Regardless of the fact that over 75% of the story remains to be revealed, that of it which on display in act one is dark, honest, and fun.

While I will need to come back to this game in a month to complete act two, I am already sold on Final Fantasy IV: The After Years as being the crowning jewel to WiiWare for 2009. The game sounds great, looks great, plays well, feels old-school, and has a deep and interesting plot with characters we already know and love. What more can you ask for..?