Over the winter holiday I downloaded a cute little game called Fairune to my 3DS. After messing around with it for a bit, I moved on to other diversions, but when I came back at a later date I discovered that I wasn’t that far from the end of it at all.

So, what is Fairune, exactly? While it has the basic trappings of an RPG, such as experience and levels, it’s really more of an exploration-adventure title — and an easy one at that. Combat is as simple as running into an enemy, and not even sword-first. There is no attacking, merely bumping into stuff. If the enemy is the same level as the heroine, then both she and the monster take one point of damage. If the monster’s one level above her, it still takes the same amount of hurt, but her damage is doubled. If the monster is higher than that, she can’t hurt it at all. But if it’s lower than she is, then it just dies with no experience gained. A magic book obtained at the start of the game tells the player which monster is currently the best target for the heroine’s level, which is also the best way of telling where to go next. The game itself sure won’t tell you.

This is where we come to the main issue with the game’s story: it doesn’t exist. The player is dropped into the middle of Fairune‘s world with a single directive, which is to find the three icons of the spirits and defeat the evil demon known as Megadark. There’s no other real direction to be had, and no explanation for this curious, magical little land. While some of the imagery in the game’s scenery is intriguing — particularly what’s in the background of the boss battle — the player is left to interpret it as he or she may.

On the plus side, it would take a supremely infernal lack of talent to mess up a translation of this game. There’s really not much to work with. 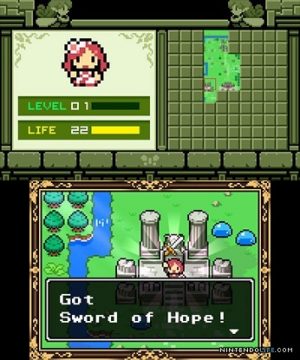 The game’s controls work well enough, though figuring out the right tool to use can be annoying, especially if something important is overlooked halfway through. Exploring the entire world is more difficult than fighting monsters, and the player must keep a sharp eye out for clues in the scenery to help uncover new routes. There are four secret items to find, each providing a useful boost, as well as a handful of rare monsters to challenge.

Fairune does quite well when it comes to presentation. It takes the basic design philosophy of the Game Boy Zelda titles while at the same time making it both more retro-looking and more vibrantly colorful. The game boasts a dozen tracks of music, and they provide one of its best features with a quirky, cheerful sound that matches the environments perfectly.

All in all, this was a very easy game, as it was meant to be. The sole challenge difficulty-wise would be the battle with Megadark, when the game decides it wants to be a shooter instead. It’s easily beatable in under three hours the first time around, and even has an achievement for finishing in under an hour. As the basic framework of a game, it serves adequately, but that’s about the most praise possible. Hopefully the upcoming sequel does more to build a good game off of the foundation presented here.