Stop Draggin’ My Heart Around

Drakengard can be justly criticized for a litany of things, and Cavia appears to have tried fixing most of them. Drakengard 2 succeeds in delivering a different experience from the first, and its combat mechanics are a definite improvement. Its story goes in the opposite direction, removing the fascinating taboo subject matter of the original game in favor of much more generic material. Even the revised combat only satisfies for a certain amount of time, which the game unwisely extends to unnecessary length.

Drakengard 2 takes place eighteen years after the first game and features a protagonist named Nowe, who has access to a dragon companion named Legna. He is a new member of the Knights of the Seal, an organization ostensibly dedicated to preserving the protections put in place to prevent the end of the world. After making discoveries of knightly brutality toward the citizenry and his own attempted assassination by the Knight leader, Nowe abandons the organization and eventually throws in his lot with a woman named Manah. Her goal is to eliminate the seals in the name of freeing the populace, a task she undertakes seemingly as atonement for her actions in the first game.

Nowe is an uninteresting protagonist, whose inability to learn anything about the workings of his surroundings necessitates others tediously explaining them for the opening segment of the game. Once the central plot kicks into gear, much of Nowe’s dialogue is repetitive rumination on all the things he wants to save. Several significant parts of the narrative are inadequately explained, leading to frustration when characters act stupidly. For all the material it did not elaborate upon, the first Drakengard‘s story was fascinating, something its sequel cannot claim. 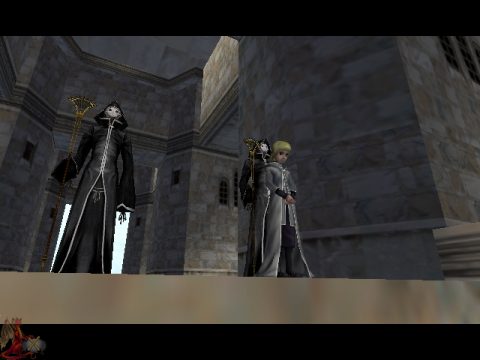 When more than one quiet guy in a mask and hood shows up, be careful with the Kool-aid.

When it comes time to fight, Drakengard 2 offers a noticeable improvement upon the first. The soul of a weaponized beat-em-up like Golden Axe still courses through the game, but the pace has been increased. Slamming one button will still work on many enemies, but a few more options are present to vary the proceedings. Both blocking and hitting the enemy charges a magic meter, rendering spells of varied use to be applied against the opposition. Nowe can also take to his dragon in outdoor locations to spray the foe with fire from above, which has been made easier via Legna knowing how to hover so that flying back and forth is no longer necessary. Getting the dragon oriented at the proper height is an issue this time around in the few missions that require it, making their paucity a happy thing.

Legna also takes center stage in a number of flying missions that ape Panzer Dragoon, though still unsuccessfully. They do represent an improvement over the first game in that targeting enemies is easier, but even seeing something directly above or below Legna proves a trying task. Aerial missions tend to end quickly thanks to the speed with which Legna can swat enemies down, which at least makes their annoyances easy to accommodate.

On the ground, the camera that bedeviled the first game has improved without actually reaching acceptability. The camera moves as the player does, and the options for the game allow swapping between manual control and something that follows wherever the lead character is facing. The key ingredient missing here is something that would instead follow the closest enemy, or an overhead view as an alternative. Boss battles feature such a thing, in which the camera constantly orients toward the enemy, which makes its absence in every other mission quite displeasing. The result is that any time the player shifts perspective, losing sight of whatever might be furiously trying to tear one apart is a very likely prospect. It occasionally gets stuck inside scenery momentarily, but the inability to reliably see the surrounding antagonists is far more frequent.

Drakengard 2 is like its predecessor in featuring a huge number of weapons that can be acquired and will improve in deadliness through killing, with any eight accessible to choose from per battle. The largest number are swords used by Nowe, but spears, maces, and axes will result in one of three other characters appearing on the field. Each character is particularly effective against certain types of enemies, effectively encouraging the player to give all of them some use. Ideally this would be so, but Drakengard 2 constantly tosses in asinine plot reasons to keep the full variety of the character stable inaccessible. Only on a New Game + play will all of them be available, which is quite a bit to ask when the difficulty is automatically increased when doing so. 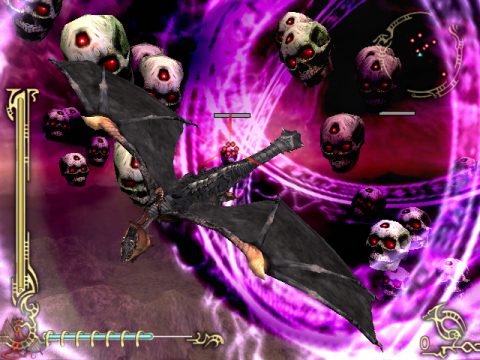 No caption is really necessary, since this picture speaks for itself.

Eschewing the system of its predecessor that allowed the player to select individual levels to achieve different endings, Drakengard 2 requires the entire game to be played again on a higher difficulty. It will then increase the difficulty again for a third playthrough, which is certainly one means of making the experience take longer than the twenty-five hours one completion demands. Even on the lowest difficulty the game is quite capable of killing the player quickly, though the continue option lets any experience remain so that the time is not completely wasted.

Something the first Drakengard struggled with recurs: the question of how to keep a very lengthy beat-em-up engaging throughout. Drakengard 2 lacks an acceptable answer either, recycling the same enemies constantly and making many missions far longer than they need to be. Late in the game Cavia resorts to including neon green glowing palette swaps of other enemies that do nothing different except hit harder. So many missions revolve around the eventually-tedious task of killing everything that the few which don’t stand out brightly, especially when the same locations are frequently reused.

The visuals are roughly on the same level as the first game, which is disappointing when the game came out relatively late in the PS2’s life cycle. The short draw distance is particularly annoying when enemies don’t pop up until ridiculously close, and the game’s usual tactic of having still screens with talking heads for cutscenes demonstrates a lack of either budget or caring on Cavia’s part. Those talking heads are voiced by actors who generally refuse to raise their voices or vary their even-tempered tones, even in situations that would seem to demand it. At least the music is quite pleasant, with a number of worthwhile compositions.

It’s a shame that Drakengard 2 doesn’t represent a dramatic improvement over its predecessor, but at least Cavia made an attempt. The reptilian brain that thrives on nothing but pure reflex stimulation finds a fair amount to enjoy with this game, at least until it outlasts its welcome. It’s hard to recommend on any other basis, because of the letdowns and frustrations rife in the endeavor. Drakengard 2 is in keeping with its predecessor, a deeply flawed title, and why it got a Mature rating when it barely touches on the nastiness of the first game is a mystery.