Dragon Is on the Menu

After originally releasing the game on PlayStation 4 and PC a couple of years ago, Idea Factory has brought out a Switch version of Dragon Star Varnir.  It’s a direct port of a Compile Heart game that is a mixed bag, making the only draw of this particular release being the ability to take the game on the go.  A colourful cast of playable characters, along with entertaining combat highlighted by the ability to devour enemies to gain new skills, are countered by plot threads that just end suddenly and bring the otherwise adequate story to a halt, as well as restrictive end-affecting mechanics that make the pacing fall flat.  It amounts to an average game that has some fine moments but is murky to wade through.

In Dragon Star Varnir, the player follows Zephy, a new recruit to the Knights of Requiem.  The knights believe witches are at fault for all of the world’s evils, as without them dragons wouldn’t exist.  If this persecution wasn’t already enough, witches are born with a curse that leaves one of two terrible options in front of them: either don’t eat dragon meat for a long period of time and go insane, or eat too much and nurse the dragon born inside them until it overwhelms and transforms them.  Zephy starts out the game with a hatred for witches after a dragon killed his parents, but after almost dying, a group of witches save him using dragon blood, surprisingly awakening latent witch powers within him.  Zephy then gets to spend time with these witches learning their plight and slowly joining their family.

The game is split into chapters, with each chapter containing one dungeon.  When the boss of that dungeon is defeated, the next chapter begins.  In between each dungeon, the player can spend time at the Witches’ Den.  This safe haven contains a shop, a place to obtain side quests, and a workshop for making elixirs.  Elixirs are made of ingredients that can be harvested in dungeons, dropped by enemies, or found inside destructible scenery, and they are mixed with a catalyst to create better equipment.  Elixirs are used to spawn fights, which if won will net the player a piece of equipment.  This can be semi-random depending on the catalyst, as some are specific for weapons or armour, while most are generic and can be any equipment option except accessories.  In the early game, these elixirs will only make slightly better versions of store-bought equipment, but a lot of high-end gear is made through this method later in the game.  Missing out on this equipment can make life harder, but the game provides enough to make it just a fun diversion.  Also at the Witches’ Den, Zephy can visit the other player characters and give them gifts to raise affinity, with these events providing a lot of the characterization and backstory for the witches. 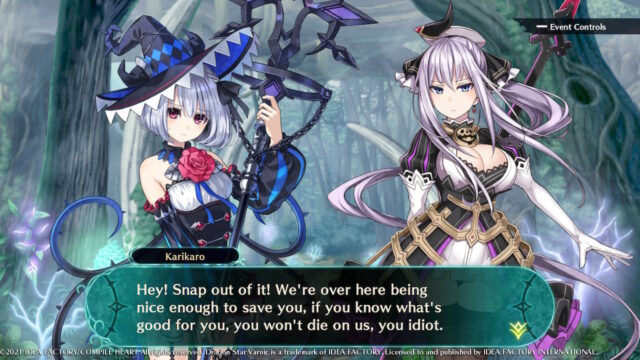 How inconsiderate of Zephy, being in pain from bleeding out like that.

At the Witches’ Den, players also have the ability to visit the little sisters, younger witches being looked after by their elders.  Visiting them is important as keeping them alive is a crucial factor for the game’s ending.  Taking care of the little sisters is definitely the most frustrating aspect of the game.  The longer the player stays in a dungeon, the hungrier the little sisters get.  If they are not properly fed to mitigate their madness meter, they go insane, run away, and turn into a dragon that is then found as a random encounter in a dungeon.  However, feeding a little sister too much will still turn them into a dragon.  The challenge of balancing this threat makes going back to finish uncompleted side quests or collect elixir ingredients isn’t an option for those hoping to keep the little sisters alive.  Luckily, players are always given a grace period to feed the little sisters after a dungeon, which means they can stay in the newest dungeon and ensure they collect everything they can before moving on.

Also factoring into the game’s ending options is the player’s madness scale, which goes up slightly after each party wipe.  The madness scale is affected more drastically when making the wrong choice of two dialogue options that occur once a chapter.  No matter which ending the player attempts for, villains do not get a chance to stand out as motivations and backstories are not shown.  The cast of playable witches is endearing and fleshed out well, and gaining high affinity with each is helpful in connecting with each of them, personality quirks and all.  The route to each ending does not deviate the story, but does affect the final push towards the ending.  There are three endings in all: the madness ending is incredibly dark and depressing, the normal ending has the most cohesion to the rest of the game, while the true ending is almost bizarrely positive considering all that happens before.  Overall, the story feels disjointed as some beats hit really hard with great development, but other story threads are dropped suddenly.

Regular encounters in Dragon Star Varnir are against dragons.  Players are set on a three-tiered battlefield that allows for a lot of possibilities for defensive positioning, such as avoiding group attacks or using formation-based boosts.  Three party members are active in combat, each able to be assigned a support member.  During each turn, a party member can move up and down or swap with their support character.  Supports have a small chance to add to an attack, counter, or jump in to create a shield negating an enemy attack.  Offensive abilities include attacks, magic spells, and devour abilities.  Devouring allows the character to learn new abilities from the core that is obtained.  Devouring can be attempted at any time and instantly finishes off a dragon with a small initial chance of success, the grows by hitting them with skills that exploit their weaknesses.  Successfully devouring a dragon grants a core that is used to learn new abilities.  With six elements for spells, including light and dark, as well as four different weapon damage types, there are plenty of options to exploit a dragon’s weakness.  Trap skills are a fun diversion that can increase a dragon’s fear level, but it is simpler to just hit weaknesses.  Each character also has a dragon gauge which, upon filling, causes a transformation animation that includes a lot of fan service.  This transformation is not just for show, as they gain a powerful devour skill and a big boost to damage on regular skills. 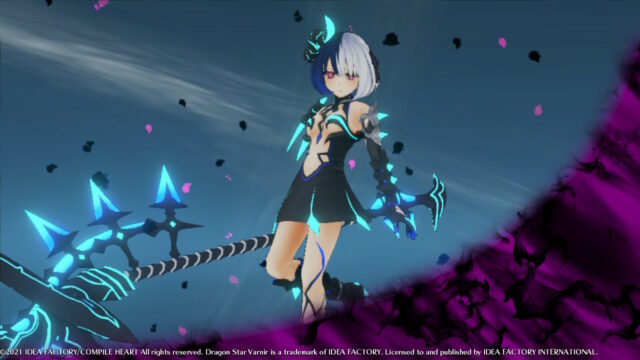 Minessa, after her dragon transformation.

Dragon cores have a mini-grid of abilities or stat upgrades gained by spending factor points.  These points are obtained from combat along with experience and money.  However, only a maximum of five active and passive abilities can be equipped at once, with a maximum of twenty points and each ability costing three to six points.  This leads to abilities being useful long past their normal shelf life, which is enjoyable to see.  Passive abilities are made more useful by being percent based, which lets them make a big difference towards the end of the game when characters have higher base stats.  A late game addition only has access to boss cores collected so far, perpetually leaving them weak compared to the rest of the team, since every character can learn any ability, there’s little point in building up all six characters anyway.

Dragons will respawn if the player goes farther than one or two rooms away and each dungeon contains a save point before the boss that restores all health and skill points, making it a good place to set up a camp to grind from.  Dragons fall into three camps as the game progresses, but the challenge level feels in the player’s favour throughout.  Basic dragons are straightforward to work with, while dodge heavy types are hard to devour but easy to kill with magic, and health sponges that tank many hits before going down give players more than enough opportunity to boost up the devour chance and render their health moot.  Players will come across simple obstacles while exploring, but getting past these is a simple matter of using one of the characters’ dungeon skills.  For example, Zephy can destroy magical barriers, while others can find hidden treasure chests or build bridges over gaps.  The obstacles are ultimately pointless, and it’s annoying to swap to the necessary character as hidden treasure is found in many rooms. 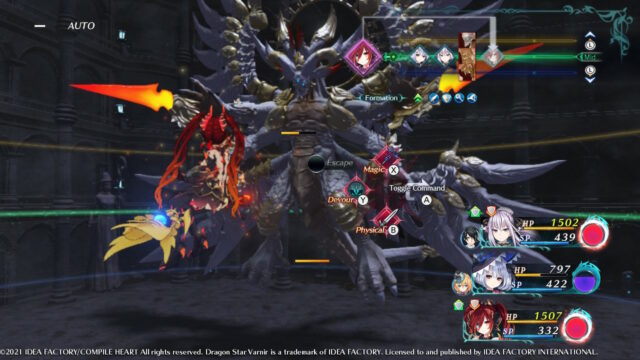 Dragon Star Varnir is a very by-the-numbers game visually.  Dungeon backgrounds are average, combat models are basic, and animations for attacks and magic spells are simplistic.  Dragon awakenings and their special skills are animated beautifully, but there’s only one for each character, so they become repetitive.  Designs for the boss dragons are well done and add gravity to the encounters.  Story scenes are set like a visual novel and have character portraits talking to each other with minimal animations, often using sound effects for punctuation rather than changing the visuals.  This results in what should be action-packed events being simply heard rather than shown, making a lot of confrontations fall flat.  Voice acting in both English and Japanese is well done, but voiced lines in English, however, are reserved for the beginning and end of a chapter and some big moments are left silent.  Since everything is voiced in Japanese, it feels more alive than the English option.  The music heightens the mood a bit but ultimately doesn’t stand out, being serviceable while in town or going through fights and dungeons.

Dragon Star Varnir is exactly what it wanted to be: a safe game.  Most of the ambition went into the combat system, where it succeeded.  There are moments where players can lose themselves in the story, only for the presentation to bring the excitement to a screeching halt.  Most annoying is how it feels like it punishes the player for spending too long exploring through the frustrating little sister system that creates some tension, but is much more tedious than it’s worth.  These time constraints make the playable cast feel much smaller due to an inability to use them all consistently.  Dragon Star Varnir has it’s positives: witches are all heartwarming and interesting in their own way, while combat is also fun, with devouring dragons for cores a notable perk.  It is just not enough to take this game higher than being adequate. 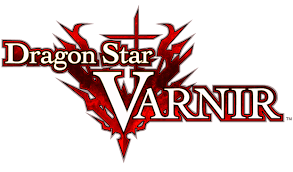