Long reputed to be one of the finest in the Dragon Quest series, the sixth entry was prevented from an official English release on the Super Nintendo because Enix shut down its North American offices. The game remained a SNES exclusive for a long time, but the Square Enix DS Dragon Quest remake machine lit upon the title, giving it another chance to be seen outside Japan. Thus the world outside Japan was given the chance to play Dragon Quest VI: Realms of Revelation, more than fifteen years after its initial release. The game will not prove revelatory to anyone who despises the series, but is quite worthwhile to those seeking a traditional RPG that will reward the time spent in its company.

Dragon Quest is not known for complex narratives, but Realms of Revelation succeeds in staying interesting throughout. The story’s beginning finds a nameless hero being enlisted by his town’s mayor to get the best possible price for local specialties. After accomplishing this mundane task, the hero accidentally uncovers a parallel world, one in which he exists in an ethereal state. Investigating this parallel world coincides with the hero’s recruitment to fight the monster menace Murdaw, a nasty being that has plagued the land for years.

The dual worlds of Dragon Quest VI allow for an interesting means of storytelling. This series centers its tales on the lives of NPCs, and the presence of a parallel world literally representing the dreams of the world’s people allows for a number of fascinating scenarios to unfold. The main cast also has some potentially interesting stories, but their tendency to be closemouthed saps some of the drama from their lives. This is not a major issue when the loquacious and well-localized NPC denizens of the world are entertaining to observe, but should nevertheless be noted. 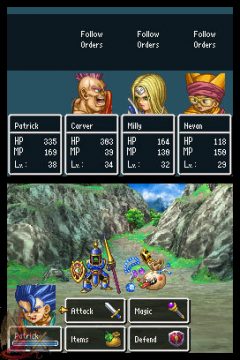 When it comes to combat, Dragon Quest VI hews closely to the rules established earlier in the series. Randomly encountered enemies fight it out with the protagonists in turn-based combat, with the turn order being somewhat unpredictable. One innovation the game makes is rather welcome, however: up to four additional characters can wait in the wings to be swapped with the active party, and all characters that can participate in battle earn the same rewards. This was quite innovative for 1995, and is rather unusual today, save for certain other installments of the Dragon Quest series on DS. The archaic mechanic of being unable to select individual enemies within a group to attack is still very much in place, however, confirming that not everything about the game’s combat is progressive.

Dragon Quest VI‘s class and skill system is likewise a mix of the pleasantly progressive and the annoyingly archaic. At a certain point midway through the story, a facility is unsealed that allows all characters to change their vocations. The secret to mastering a vocation is simply to fight a certain number of battles with it, a task that fits well with the grinding intrinsic to Dragon Quest. The abilities each vocation learns, the number of battles necessary to reach its next level, the effect of different jobs upon a character’s statistics, and the requirements to unlock advanced classes are all available to view at any time &mdash but only at the vocational facility.

If a character masters a class in the middle of a dungeon, the player must decide whether wasting battles or wasting time is more important. This inability to view class leveling information while navigating the world is clearly derived from the series standby of not seeing how much experience is needed to gain a level without visiting a priest, but is much more bothersome in this instance. The need to go back to this location for every class change is monumentally annoying.

In some ways Dragon Quest VI‘s inventory management is bothersome, while in others it’s pleasantly modern. The effects of equipment are clearly visible prior to purchase, but shopkeepers will not offer to purchase things that have just been replaced. Most of the time, having the item necessary to proceed to a new location is enough, but sometimes the game requires manually selecting something in just the right place, or else nothing will happen. Those instances are, fortunately, as bad as the interface gets. There are a few puzzles in the game that rely more upon exploring the world than obtuse mechanics, and are rather enjoyable as a result. 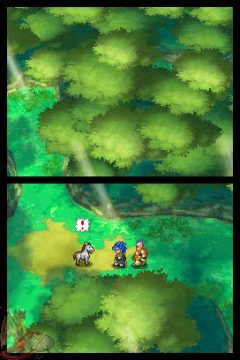 Dragon Quest VI definitely succeeds in rewarding exploration. There are numerous optional activities in which to participate, and several side quests to investigate. Hidden characters are also available, in the style of other RPGs from the later years of the SNES. A dearth of content is definitely not a complaint that can be leveled at this game, and searching for the many fascinating, rewarding things slightly off the trail stays tantalizing throughout. The main quest will take around forty hours to complete, but going for the extra material will add quite a bit to that.

This remake has updated its SNES-era visuals somewhat, notably in a few sequences that were reworked to fit on both DS screens, and the result is a game that looks just fine without any standout elements to push the hardware. Per series tradition, the characters do not appear onscreen in battle, though the original version of the game was the first in the series to animate monster actions. Koichi Sugiyama’s score is very good, with majestic melodies and high-quality synthesizers to make it sound sumptuous even through the DS’s speakers. The score’s only fault lies in the reuse of many compositions a little too much, though they never become unpleasant to the ear.

Dragon Quest VI is not going to convince anyone who despises the series that it deserves a reassessment. The random encounter rate can be vexing, and the means by which vocations are mastered requires lots of grinding. The game tells a fascinating story, but without a lot of dialog to flesh out the protagonists’ personalities. The game’s world is quite interesting to behold and explore, however, a quality not every game can be said to possess. Its addictive nature will ensnare anyone with even a hint of fondness for the Dragon Quest series, and will work quite well as an introduction to the games for any who are curious.