Welcome back to RPG Elements, the corner of RPGamer where we take a look at select merchandise related to the RPGs we love. Kicking off Volume 2 of the column, we take a look at the work of a legendary character designer and artist, paging through three decades’ worth of Akira Toriyama’s contributions to the seminal Dragon Quest franchise. 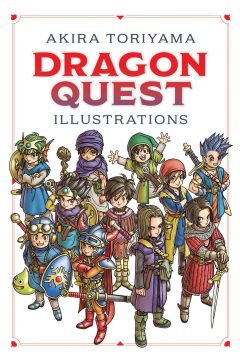 It was in 1986, in the Japanese offices of Shonen Jump magazine, that two of its employees began to collaborate on a video game, one that seemed at the time nothing more than a short-lived side project. Thirty years later, that game has fostered an empire, remaining one of the largest and most influential RPG franchises ever created. This account of how Dragon Quest came to be is told by Akira Toriyama and Yuji Horii themselves, in the foreword and postscript of the newly released compilation artbook, Dragon Quest Illustrations: 30th Anniversary Edition.

The book feels extremely sturdy and compact, with thick, glossy pages perfect for photo prints, and a just-slightly embossed attractive front cover featuring all eleven mainline series protagonists assembled in one group. After Toriyama’s foreword and the table of contents, the book is divided into chronological sections by game, following the series from its conception, with five additional sections interspersed between to provide some coverage for spin-off games like Monsters, Heroes, and Builders. As an added bonus, hidden just behind the front cover is a fold-out poster version of the book cover, with a timeline of the Dragon Quest series from 1986 to 2016 on the back.

Most of the games receive somewhere between ten to fifteen pages worth of space for illustrations, with Dragon Quest I bringing up the low end at six pages, and some of the later disc-based entries approaching twenty or so. The three games that get the most love are DQIV: Chapters of the Chosen, DQV: Hand of the Heavenly Bride, and DQVIII: Journey of the Cursed King, clocking in at thirty-plus pages each. Most of this is due to enemy designs being given much more space to breathe; whereas enemy galleries for the first three games cram in upwards of ten enemies onto a single page, IV and V include extensive galleries with larger, less cluttered images. VII is an anomaly, as Toriyama, for the first time, took it on himself to design a large number of the game’s NPCs, and VII‘s chapter reflects that, with only a handful of actual enemy designs thrown in for good measure.

The Dragon Quest series is no stranger to reappropriating enemy designs in subsequent installments. The art book wisely keeps repetition to a minimum, with enemy illustrations generally only appearing in the installment they debuted in. Merely a few designs that received visual updates or redesigns in later ports of the game — usually the playable party members — are displayed more than once. The notable exception to this is the coverage of Dragon Quest IX: Sentinels of the Starry Skies, which includes eight pages of the same two character models in various costumes to represent the game’s job classes — the one time in the book we get anything resembling gear or equipment coverage disguised as character designs. Each section is further rounded out by package art and some beautiful, full-page reprints of V Jump cover pages. Each chapter of the art book begins with a collage-style title page listing the numbered entries and ports covered in that section; this title page’s black background contrasts well to the remaining book’s white pages. 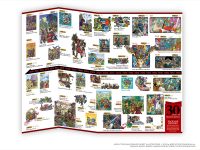 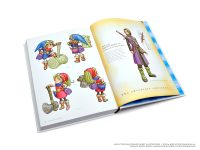 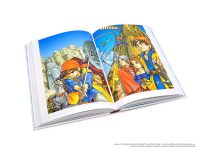 Obviously the full-color illustrations pop well against the white backdrop, but there are times when there is just far too much white negative space on a page. Bosses often receive their own, dedicated page, but in the case of DQII‘s High Priest Hargon and Malroth, that means two rather small images arranged in the middle of the page, with tons of unused space around them. Later sections handle this much better, with DQVI‘s Mortamor receiving a full two-page spread, half of which is solely dedicated to his second form featuring an edge-to-edge wing span. For me, the Ultimate Boss Treatment Award goes to VII‘s Orgodemir, whose four forms not only cover three whole pages, but use up most of the space provided to chronicle his slow descent into a molten pile of misery. This, of course, comes at the risk of slightly spoiling this evolution for any players who haven’t completed the game yet.

Some slight character spoilers are also included in VIII‘s character designs, which include clearly labeled character transformations that new players aren’t meant to know about until their in-game reveal. This chapter is also the only time in the book we get anything other than character illustrations, cover pages, and package art, in the form of two vehicles Toriyama designed for the game: the horse-drawn wagon and the ancient ship. Dragon Quest VIII also handles the issue of unused negative space the best, including alternate angles, expressions, close-ups, and pencil sketches to fill up the corners of pages much better than previous chapters of the book did. This, unfortunately, does not set the standard for the remaining handful of chapters, as the book returns to wasted page space almost immediately. The worst offender of this comes near the book’s end, during the spin-off chapter for the two Monster Battle Road games; the entire chapter consists of six pages, each featuring a different character from a V Jump cover, with more than half of each page taken up by the character’s sword sticking off into empty space.

What I really wanted, what would have given a great purpose to all the white space left over on each page, were some snippets from Toriyama himself, sharing a thought or two of background about some of the illustrations. Sadly, there is almost none of these, barring two or three examples where an original design note was kept intact and included in the book (translated to English, of course). As a trade-off, a four-page analysis by the editorial staff at V Jump is included as a sort of appendix at the end of the book. Each of the entries in the series (barring the spin-off titles) gets a few blurbs of written text here, highlighting a few historical facts, anecdotes, and additional explanations for the content found in this book. It’s interesting, to be sure, but kind of a shallow substitute for the thoughts from the designer himself.

Any western readers and art enthusiasts picking up this book will undoubtedly wonder at one very noteworthy exclusion. Despite the book’s front cover including DQXI‘s Luminary along with the other ten protagonists, and there being a full chapter listing for DQXI in the table of contents, there is almost no actual content about this latest title included in this book. In fact, the entire DQXI chapter spans the length of one total page, which features only two views of the Luminary (one a pencil sketch) and nothing else. The reason for this is simple: the book was originally released in Japan in 2016, on Dragon Quest‘s actual 30th anniversary, and the next numbered game, even in Japan, was still a year away. Though the game has by now released even in the west, no content has been added to bring the book up to date, apart from its translation into English. The exclusion of this latest offering is understandable, though still lamentable in terms of providing a full historical up-to-date record of the series.

Verdict: Even at launch, it’s already one full game behind the series, and it offers less direct insight than I would personally like, but it’s a high-quality collection of lots of character designs. Recommended for Toriyama fans specifically, but casual DQ fans won’t get the most out of it.