Welcome to another #JRPGJuly! Here’s to another year of communities coming together to love, play, and talk JRPGs. For those that are unfamiliar with the event, it was created as a community game-along by Anne Lee of Chic Pixel and hosted by MDi. What is the goal of #JRPGJuly? To play JRPGs and share the experience with others through blogging, social media, and on the RPGamer Discord server. Join us on Twitter with #JRPGJuly and engage with your fellow JRPG fans!

As always, the RPGamer crew loves being a part of the event. Let’s see what folks are going to be blogging about in weekly updates this month! Also, check out our #JRPGJuly themed streams throughout the month over at our Twitch Channel!

Read on to learn more about what we’ll be playing:

My name is Sam Wachter (@merrygodown), and I am the Operations Manager! I do site related things: mainly features, impressions, and reviews. Josh and I are beyond thrilled that #JRPGJuly is happening again and we will be sharing all of the staff’s progress throughout the month. The game I will be paying for the month, as voted by readers on Twitter, will be Dragon Quest VIII. I tried to play this one years ago on PlayStation 2, and it just didn’t click with me. I’m hoping to give it a second chance, and given my luck with the Dragon Quest series, I think it’s going to be a great experience.

Hi everyone, my name is Joshua Carpenter (@jscarpe) and I’m the other half of the team organizing #JRPGJuly for the site. I love using #JRPGJuly as an excuse to explore my extensive backlog, so this year I chose to dive back into my personal pile of shame and play Final Fantasy VI Pixel Remaster, one of the seminal games of the genre that I’m quite embarrassed to have never gotten around to experiencing. You can follow me appreciating the Final Fantasy fine arts (there’s an opera scene right?) on Twitter.

Hi! I’m Anna Marie Privitere (@amprivitere), the co-owner of RPGamer. I’m always excited for another year of #JRPGJuly, and I have two games I plan to dive into this month. The shorter game will be The Cruel King and the Great Hero, with the longer game being Blue Reflection: Second Light! Both were gifts from Chris, my spouse and the other site co-owner. I may also mix in some Final Fantasy Pixel Remaster content, as our Steam Deck recently arrived. I’ll be posting gaming updates regularly on Twitter.

Your man in Japan here, Michael Baker (@MaikelYarimizu)! I was looking through my shelves and realized I still had a few Vita games left on my backlog to try. Since Atelier Meruru is one of the handful of Atelier games I’ve never played, it just feels right to dedicate #JRPGJuly 2022 to rectify that. The other game I’ve yet to touch is Oreshika: Tainted Bloodlines, so if I finish Meruru early, I’ll be doing that one as well. Here’s to a good month of gaming!

I’m Jervon Perkins (@QueerShapedLife), and I’m a reviewer at RPGamer. This year, I will be focusing on Xenoblade Chronicles: Definitive Edition. This is a game that I played for the first time a little over a year ago, and replayed several months ago… but I’ve felt compelled to replay it again. Since I’ve played this game and Xenoblade Chronicles 2, I’ve become a HUGE fan of the Xenoblade series and I’m also a hardcore Xeno-series fan, most notably of the Xenosaga series. Since the announcement of Xenoblade Chronicles 3, I’ve been deep-diving into Xeno-series lore and this will be my first in-depth playthrough with that knowledge. I’ll be sharing a more in-depth look at my journey on Twitter.

Hello! I’m Jon Jansen (@jjansen34) and I review games here at RPGamer. I’m looking forward to participating in my first #JRPGJuly and trying to challenge myself in this first go-around. Though I didn’t enjoy Elden Ring as much as others, there were parts of the game I enjoyed, so I’m going to give these games another chance in the form of Demon’s Souls. Hopefully a more linear structure will allow me to focus on actually learning the mechanics of the game so I can “git gud” at it. I can’t wait to journal my frustrations and many, many deaths each and every week. Follow me on Twitter to enjoy my misery in real time!

I’m Paul Shkreli (@paulwall217), a reviewer at RPGamer and I’m back again this year for #JRPGJuly! Last year I played a game from the Star Ocean series, and this year I am going to pick another storied franchise: Tales. I recently got my Steam Deck, and Tales of Symphonia has just been staring at me, asking for a replay, especially since Grandia II isn’t compatible yet. As I’ve recently argued, Tales of Symphonia is a great entry point into the series, and I am curious to see how it fares against the most recent game in the series which came out last fall. I’ll be sharing my thoughts on the game (and life in general) on Twitter, see ya there!

Hi all, I am Sarah (@yournoodleface) and I do graphic design and the occasional article or blurb parts for features. I always look forward to #JRPGJuly to really force me to make time to play the games I enjoy. This year I will be concentrating on playing Final Fantasy XIV to catch up as much as possible, as I’m currently making my way through Stormblood. I am a completionist though, so I like to do ALL THE QUESTS in each area before moving on, which is probably a reason why I’m so far behind.

Hola RPGamers, Ryan Radcliff (@RadShadow) here. It’s a new year and #JRPGJuly is a great time to jump in that backlog and tackle some games you’ve been meaning to play for years. For me, that means, continuing my journey through Shin Megami Tensei V, and once that’s complete, hooking up my Wii and finally playing The Last Story. SMT V has been a fun ride, and I have heard good things about the Mistwalker RPG. This feature at RPGamer is always tons of fun, and I love seeing the crew’s collective journeys through all these wonderful and diverse games. Viva la entertainment!

Hello everyone! I’m Cassandra Ramos (@BerryEggs), aka Strawberry Eggs, and these days at RPGamer I contribute to features and help when I can. As has become tradition at this point, I write either about a JRPG I played through in the past, or try to get through something new. For this year’s #JRPGJuly, I intend to play through a game I’ve played once over twenty years ago: Skies of Arcadia Legends. I need a refresher on this cult classic, and this seems like the best time to do it. Let’s see if I like it as much now as I did back when I was a teenager.

Hey all. I am Erik van Asselt (@FanFrog). You might have seen one of my streams on the RPGamer Twitch channel and now you are wondering what I am going to do for #JRPGJuly. In the past few months, a lot of viewers have asked me to revisit one of the classics on the old PlayStation, a game I have never played and I’ve always cherished a curiosity towards. This game was supposed to be Sony’s Final Fantasy VII killer. You guessed it, during #JRPGJuly I will stream my full playthrough of The Legend of Dragoon for the PlayStation with the goal of finishing it this month. I hope you will join in on the fun on RPGamer’s Twitch Channel. 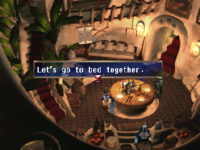 Hi, I’m Robert Sinclair (@lolwhoops), and this year for #JRPGJuly I’m hitting my Switch backlog and jumping straight into one of my favourite series. I’m already progressing in Shin Megami Tensei III: Nocturne, so I’m planning on starting there and then moving on to Shin Megami Tensei V. Believe me, I’m going to love every minute of it. I’ll be posting screenshots and general thoughts over on my Twitter and it’ll be great to join in the JRPG love again this year.

Salutations! I’m Phil Willis (@JCServant) aka JCServant, host of the RPGamer Experience, a nightly stream show over on our Twitch channel. This year, I’ve chosen to play Dragon Quest XI S. Over the last five years, I have played every mainline Dragon Quest game, save the latest and it’s time I rectified that horrific oversight. Dragon Quest XI S has received worldwide acclaim from both friends and critics and I cannot wait to try out the 3D to 2D mode! Those interested in keeping up with my adventure can join me on our Twitch channel Monday through Thursday nights at 9:30 pm Eastern.

Hello everyone, my name is Ryan Costa and I’m a reviewer for the website. After the news of the Persona games being added to Game Pass came out I applauded along with everyone. But then I looked at my Vita residing on life support, and it seemed to be swearing at me for not using it nearly enough.  Fine Vita, I’ll finally make the time to play Persona 4 Golden. When I made that decision for one small moment I thought the console smiled at me. When it comes down to it for me that’s what #JRPGJuly is all about, remembering obscure RPGs, or in this instance underused handheld consoles. So join me on the journey as I play Persona 4 Golden for the first time and offer my thoughts on how it holds up.