Years before he became the manly-chinned supporting male character of Dragon Quest VII, Prince Kiefer of Gran Estad had a much different sort of adventure. “Before” is sort of relative, as Dragon Quest Monsters: Caravan Heart was published a few years after DQ7, but the character is certainly the same. Prince Kiefer, age 11, has gotten his dad into a royal snit once more, and has hidden himself away in the wardrobe until it blows over. Fans of C.S. Lewis might guess what happens next. As he naps in the wardrobe, Kiefer dreams of a strange woman who claims to be the Queen of the Spirits. A portal appears, and the prince is drawn into a strange world of adventure.

It’s not an entirely new world, however. While the DQM series has never been shy about how it appropriates material from its parent series, Caravan Heart has borrowed the map of Dragon Warrior II in its entirety with only a few changes. Much of the NPC chatter even makes reference to events in the original DQ trilogy, though more as a matter of legend than of history.

Upon arrival, Kiefer is immediately thrust into a position of responsibility, as he must take command of a small caravan that’s about to be overrun by Drakkies. The nominal head of the caravan is Lewin, a scrawny lad who’s searching for a cure to his parents’ illness. Every child in the land has heard the Queen of the Spirits in their dreams, and she’s promised a powerful wish to whoever can bring her the four orbs of Loto. With Kiefer by his side, he thinks he might have a chance.

The caravan in this game isn’t just a part of the title; it’s part and parcel of the entire experience. The player starts with just one wagon, but eventually two more are acquired. Each wagon can hold one guard monster and up to four human passengers, though there are weight limits to worry about. There’s an old man wondering about who can raise the limits, but he’s rarely available. Otherwise, there are no upgrades of which to speak. 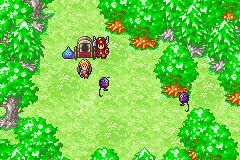 If you go out in the woods today…

More important are the passengers. Caravan Heart is odd in that it isn’t really a monster-collecting game. The player gets only three monsters to join in the main quest, plus two more that are either optional or post-game material. However, the human population of the caravan maxes out at twenty (plus a few residents at the base camp). New members can be recruited via story quests or by making their acquaintance in towns. Different sorts of characters provide different services in the field, at the base camp, or in battle.

In fact, the player’s choices for manning the caravan are as important as equipment selection might be in other RPGs. Each round one passenger in each wagon gets to act as determined by the seating order. Human characters can can variously attack, protect, heal, distract, buff, or debilitate, so the chosen order becomes a major point of strategy late in the game. However, since the squishy humans can’t grow in strength, these characters need to occasionally be replaced with more powerful versions, should they be found.

On the other hand, the monster characters will be with the player for a long time. There’s no recruitment mechanic in battle at all, so the three creatures gained through plot will have to suffice until the player can scrape up the cash to buy the fourth monster. Neither is there a breeding mechanic, unlike most other games in the series. Instead, Caravan Heart borrows from DQ7 once again with the Hearts system. 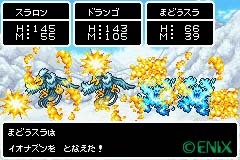 I named my monster Frank, so Frank zappa the monsters!

The Heart Catcher is a strange device that passively allows monsters to drop Hearts. Later on, Fosse (High Priestess-in-Training of Dharma in DQ7) can use any combination of two Hearts on a monster to do what amounts to a job change. Human comrades can also contribute Hearts that boost various stats. Change or boost, the results reduce the monster to level 1, so some caution is in order. Levels go up quickly by the end of the game, but even so it can be a grind to keep one’s monsters in top form.

With some judicious transformations it’s not hard to fill out a monster’s command list with a good mix of skills, at least. This game defaults to automated combat, though the option to change tactics or switch to manual always exists. The autopilot is useful for most combat situations, though boss battles require much more consideration. A good balance of skills, the right tactical choices, and a good passenger setup will get the player along just fine.

One more thing needs to be addressed, and that is logistics. Armies travel on their stomachs, and caravans do the same. The player has a supply of food that slowly decreases as the caravan travels. Different terrain types have different rates of attrition, so the most direct route between two points on the map may not always be the most efficient. To make travel more interesting, there are also random non-combat encounters. These can include NPCs offering or demanding different services, monsters in need of help, ambushes or con men, ravening hunger or crash diets, and even the occasional divine blessing. Again, one’s choice of travel companions can have a large effect on how some of these events turn out. On the negative side of logistics, the caravan’s carrying capacity is not as great as one would expect of three wagons. Space for items is limited, and this problem is compounded by plot items that serve little use for much of the game but which still must be carried at all times. There is a storage service available in towns, but it really doesn’t make sense that a trio of wagons have less space available than the bags available in most of the later DQ games. 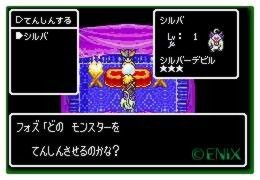 In terms of graphics and sound, this game doesn’t show off the abilities of the GBA very well. The game sprites do what is necessary, but the overall appearance is clunky and in keeping with much earlier DQ titles. The music is all retreads from the main series, but on GBA speakers. Caravan Heart may be a solid title for gameplay, but it’s certainly not as flashy or sexy as some.

For those in need of a long-term haul, once the main game is over and Kiefer returns home to Gran Estad the player is treated to a whole other second quest. The story for that extends logically from the first, though neither are narrative heavyweights. Still, it provides a good deal of material, a broad expansion of the game’s bestiary, and enough challenge to keep the player busy.

Caravan Heart is an odd duck in many ways. It certainly doesn’t resemble any of the DQM titles that came before or after it. Despite some of the choices in design, it is a good means to scratch the classic DQ itch, and the relative simplicity of many of its aspects means that it’s not that difficult to just pick up and play. For anyone interested in importing old GBA titles, this would be a good choice.