Welcome to the first session of JRPG Study Time, a series following a JRPG newbie and his pursuit of knowledge about the exciting world of said genre of games. Read on as we explore a fascinating web of mechanical evolution and thematic trends through the ages.

I have often wondered why it is that JRPGs have quickly become one of my greatest interests ever since first playing Persona 3 in 2017. Before then, I’d mostly stick to games I heard good things about on the podcasts I listened to, or that seemed culturally important. But something about the JRPG genre’s particular emphasis on stats, character progression, and raw mechanics spoke to me in a special way, and, in that formative year of 2017, I knew that I had just discovered an as-yet-unexplored world of wonder and excitement. I quickly realized that the gaming culture in Japan followed a unique progression of trends and mechanical evolution when compared to the West. Eager to dive in, I took a look back at the title that supposedly started it all: Dragon Quest, a humble game that was initially released in Japan for the Famicom in 1986 and is now more readily available in the West with a remake on Nintendo Switch, iOS, and Android.

Many look at the act of revisiting such an old game as little more than a history lesson; something to make you appreciate how far the industry has come since its early days. However, I’d argue that Dragon Quest’s scaled back mechanics deliver a uniquely immersive experience, irrespective of when it released. One key factor in this is the protagonist. Upon starting the game, you are asked to name your character, and then immediately you are plopped in front of a king, who outlines your quest and offers some items to help you get started. Who is this protagonist? He’s just some kid, I guess. He’s presented by a little sprite donning a fancy suit of armor. Unfortunately, his appearance is a lie, because he doesn’t actually have any equipment. You got to earn that stuff, you know? The hero starts out as just a hollow shell, whose strength must be developed from the ground up, and whose personality Is defined entirely by your imagination.

It’s a mystery why that kid of all people was selected by the king to save the world, but it’s important that you immediately save face by going into the wilds and earning some experience and cash for him. Eventually this leads to buying better equipment, allowing you the ability to delve deeper into uncharted territory without being immediately squashed. 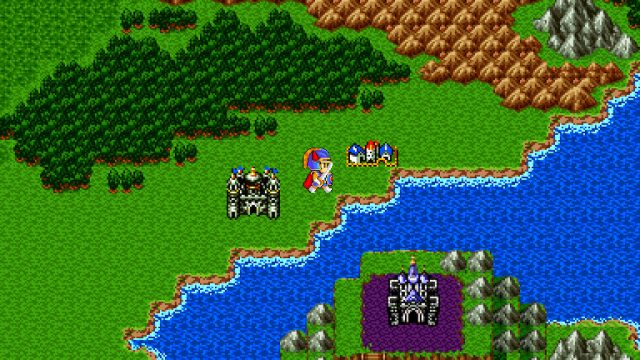 The overworld may seem small, but it holds many secrets and treasures that are desperate to be found.

There are no waypoints or map markers to tell you where to go, so naturally the key to gaining information about the world is talking to people. Most townsfolk have something meaningful to say, whether it be clues leading to a local cave said to contain mysterious treasures or directions to the next town. Much of the game’s fun comes from this organic act of investigation, amplified even further by taking actual notes while playing. Some may just pull up a guide online to help them speed through without a hitch, but I would argue that doing so removes a good chunk of the intended gameplay experience.

Indeed, exploration is about the only thing that will be stimulating your brain on this journey, as combat is mostly an act of perseverance. Bonk the enemy with your weapon until they’re dead, and maybe cast a spell here and there to spice things up; granted, your selection of arcana doesn’t get much more complicated than throwing fireballs, healing, and making monsters take a nap mid-battle. But you know what? I didn’t mind too much. Grinding is necessary to accomplish your quest, so having battles be a quick affair aids the pacing, and it never slows exploration down too much. Besides, there is a thrill to killing enemies with one strike, whether it be because you out-level them or just got lucky and landed a critical hit.

This combo of trekking through the overworld and the game’s various labyrinths and leveling up through simple battles creates an oddly immersive coming-of-age experience. At the beginning of your quest, you were a hopelessly weak nobody that could hardly slay a ball of slime, but with time you grow, both mechanically through leveling up and on a meta-narrative level through your experiences. 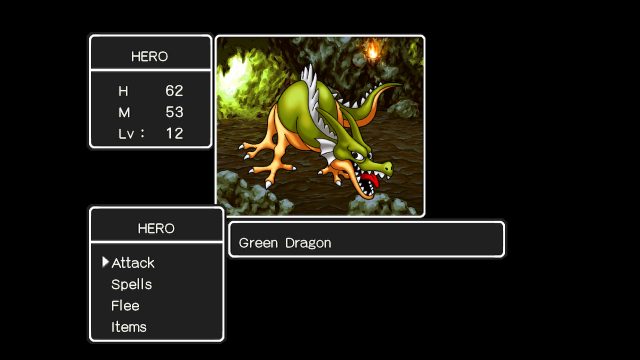 The protagonist goes from fighting cute little slime creatures to ferocious dragons within the span of his quest. Truly a thrill, it is.

Dragon Quest turned growing up into a fun video game and influenced many future games to explore similar thematic territory. While future titles in the franchise drive this point home further and more directly with more narrative focus, the original’s limited scope makes it easier to put yourself into the role of the hero. There is definitely something to be said for the limited graphical style making this an easier feat when compared to modern games.

While I didn’t go full retro in playing Dragon Quest on its original hardware, the mobile ports of the Dragon Quest games are — frame rate aside — stellar, and cause me to wonder why I can’t play every menu-reliant JRPG with one hand. For those that refuse to play the game in the most comfy way possible, there are plenty of other English versions to seek out, whether they be on the Nintendo Switch, Game Boy, or even its original home on the NES.

The first Dragon Quest absolutely holds up today, and its small scale and simplified mechanics make it an ideal starting point for those interested in breaking into the often obtuse world of retro JRPGs. If nothing else, it serves as valiant proof that sometimes less really is more.