Boot to the Head

For some reason the Dragon Ball story has proved resistant to quality RPG adaptation despite it involving a collection of fighters who must continually become stronger to fight evil. The original The Legacy of Goku managed to botch the job at just about every level, yet Webfoot Technologies was granted the reins of its sequel anyway. Dragon Ball Z: The Legacy of Goku II shows improvement in most ways from its justly maligned predecessor, but still fails to deliver a worthwhile game.

This title takes in the chunk of the Dragon Ball story that transpires after Frieza’s defeat. This period encompasses the introduction of a character from an alternate future named Trunks, the appearance of incredibly powerful android opponents, a creature called Cell designed to make itself into the most powerful being in the cosmos, and Goku’s acquiescence to death in order to spare Earth from future menaces aimed at him. None of the major events will surprise those familiar with the source material, though the game still manages to cut short many events. While those who have somehow avoided any previous Dragon Ball knowledge are not advised to start here, the storytelling at least makes more sense than in the first Legacy of Goku.

What will surprise veterans of the Dragon Ball story are the clumsy methods by which Webfoot expands the narrative through filler. Despite mentioning Garlic Junior, someone apparently thought including that section of filler from the TV show was unnecessary. Instead such blatant time-wasters as tracking down a sandwich in order to get a parade moving and shutting down a party animal’s stereo system have been included. One instance of more compelling material drawn from the many Dragon Ball movies that synced with this time period is included, but it is optional and requires some effort to access.

The major change to the combat engine between games is that the Ki meter no longer replenishes rapidly. This means that shooting a barrage of projectiles to kill enemies from a distance is no longer a guaranteed strategy for victory, although recovery items are frequent drops. Hit detection at close range has fortunately improved considerably between the games, and enemies now bounce back a pace when struck. This action was probably meant to keep the combatants from slugging each other without moving, since there is no invulnerability period for either side after being hit. Against a single adversary this is already annoying, because the enemy melee range is almost identical to that of the player. Taking repeated hits when the AI strikes first is very common due to how quickly the computer can attack when it gets into a groove. Against multiple opponents getting torn apart in a few seconds is likely if the computer manages to get a rhythm going in its attacks. Though an improvement over the first game’s tendency to let enemies overlap with the protagonist’s sprite until one side died, on any other scale this game fails to satisfy. 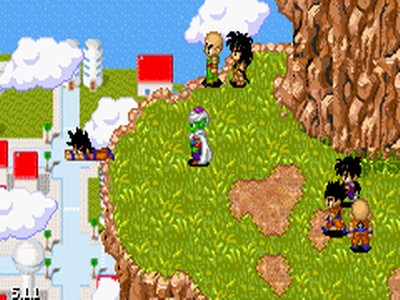 That guy on the left, the one whose name is in the title? He joins last. Go figure.

Though it can be relentless, the AI is not much improved over the first Legacy of Goku. Despite their varying attacks, every enemy in the game is vulnerable to the same strategy of being hit repeatedly while bouncing back. The trick comes when enemies have bounced into a wall, as they will then magically appear behind the player’s character. Good reaction time by the player will make this irrelevant and allow the onslaught to continue until the opposition is dead. Another issue with the AI comes from how enemies will continue to wander in place until a protagonist gets close, even if their friends are being pummeled to pieces in a corner. Exploiting this is easy to do once the player has memorized the enemy layout in any given spot, since it never changes.

Someone at Webfoot clearly found the ability to save anywhere in the first Legacy of Goku too generous for players, so the sequel regresses to the use of save points. For a portable title this is a heinous design change that greatly limits the ability to play the game when it might need to be shut off at any time. The game also annoyingly prohibits changing characters except at save points, and since numerous areas can only be entered by a specific person this can become bothersome.

Gohan, Piccolo, Vegeta, Trunks, and Goku become playable by the end of the game. Their individual statistics vary, and their Ki attacks differ somewhat, but the same tactics will work when using any of them. The concept of Super Saiyan status has been interpreted for this game as a means of moderately increasing character strength and speed while draining all Ki, and the moment it takes to transform is usually too long because enemies will gladly preempt the change by landing a hit. The transformation is nothing close to an instant win though, so forgoing it in favor of exploiting the stupid AI is usually a wiser choice.

While playing Legacy of Goku II, entrances with numbers above them sometimes appear. Not all of these are mandatory, but every time the player sees one it means that a specific character must reach the displayed level in order to enter. No matter how good someone might be at exploiting the enemy patterns, it therefore becomes necessary to grind at times. Doing so may not take very long once the enemy layout for an area has been memorized, but still takes up a significant chunk of a game that requires less than ten hours to complete. 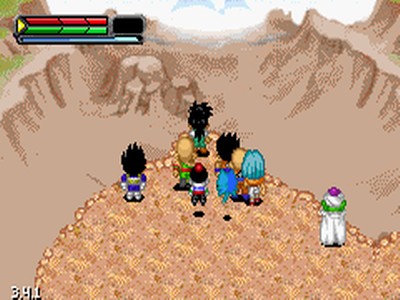 Ah, the nondescript, featureless wasteland shown in many a DBZ episode is accurately rendered.

Legacy of Goku II represents a step up visually from its predecessor, but not a major one. Most of the locations it depicts are generic rocky places mixed with generic flora, while the characters are identifiable but tiny. The game suffers from the choice of trying to recreate numerous key events from the Dragon Ball story using its own sprites and their miniscule animations, which just can’t pack the same punch that the source visuals did. Only a few stills from the show are included, mostly in the introduction footage, but they demonstrate the discrepancy between the source and this game’s visuals.

Another name is listed in the credits, but the unmistakable strains of Bruce Faulconer’s compositions for the Dragon Ball Z dub are heard throughout the game. The fact that FUNimation has a credit means this is no coincidence, and at least Faulconer’s atmospheric work is compelling even filtered through the speaker of a GBA. The rest of the sound manages to be wholly unmemorable.

There’s something amusing about seeing Vegeta, a veteran space combatant who was capable of destroying entire planets at less than a thousandth the power he achieves in this storyline, being chomped to death by seemingly ordinary alligators. The Dragon Ball story is anything but realistic, but even at its worst Akira Toriyama was able to keep things entertaining. This game shows how not to pad the existing storyline, and its action approaches tolerable only in fits and starts. The question of how to properly adapt the series into an RPG received no good answer here.