A Kamehameha Here, a Masenko There…

Dragon Ball/Z/GT occupied a prominence in my life at one time that is frightening to remember. Once upon a time, I was so obsessed with this show that I could not wait for additional episodes to be dubbed, and bought them all subtitled on VHS. Everything — all 153 episodes of Dragon Ball, 291 episodes of Dragon Ball Z, 64 episodes of Dragon Ball GT, 17 movies, three TV specials, and one OVA. This fixation was probably not the best use of my time and money, but it has left in me an enormous quantity of knowledge regarding Dragon Ball that is doubtless taking up space that my brain could be using for other things. Thus the knowledge that Monolith Soft was responsible for Dragon Ball Z: Attack of the Saiyans made me eager to try the game, and it succeeds in being an entertaining excursion.

The subtitle Attack of the Saiyans gives away the plot of this game to anyone with the slightest Dragon Ball knowledge. Monolith Soft knew that the events as laid out in the manga wouldn’t make for a very long game, and thus the story actually begins just after Goku has killed the original Piccolo. Kuririn, Tenshinhan, and Yamcha go through some training adventures prior to the 23rd World Martial Arts Tournament that are unique to this game, and events continue to be supplemented by additional content throughout. Some of the adventures the Dragon Ball cast goes through are taken from the filler in the anime, and some are created specifically for Attack of the Saiyans, with many people and places from the Dragon Ball sans Z storyline making appearances. The original story by Akira Toriyama is actually the most limiting factor, since those portions of the game that remake it are completely beholden to its plot developments, and no surprises await any veteran of the series. The presence of a skip function to speed through the plot is welcome.

The uninitiated may appreciate a quick synopsis of the events taking place in this game, however. Dragon Ball‘s hero Goku is forced to unite with his enemy Piccolo to stop Raditz, an alien Saiyan attempting to coerce cooperation in the elimination of the human race. With the help of Goku’s son Gohan, Raditz is killed, but the other two remaining Saiyans will arrive on Earth in one year. Having been killed in the fight, Goku will train for their arrival in the afterlife prior to his friends resurrecting him with the wish-granting Dragon Balls, while all the other protagonists of the series will train for the upcoming battle.

Most of the game will be taken up with fighting enemies instead of plot considerations, however. While wandering around the environments, enemies will randomly assail whichever characters are currently in the party. Battle proceeds in fairly standard turn-based fashion, complete with somewhat unpredictable action order. There are six controllable characters at most, and the three currently in battle can be switched out freely at any time during any skirmish. Characters in the active lineup automatically regenerate some hit points at the end of every turn, although status ailments can stop this. One other unusual ingredient is the Active Guard, where the player has a split second to hit the X, B, or Y button to put the corresponding character on the defense and take significantly less damage from an enemy attack. Guard Impacts can be tough to time when the window for achieving them is very brief, but they definitely invigorate the combat. Battles are fast-paced and presented well, making random fights speed by in an entertaining way. 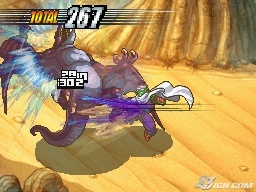 Do not mess with Piccolo, he will bring the pain.

While fighting, characters charge an individual Rage meter. Once the Rage meter is fully charged a character is Sparking, and has access to two varieties of new attacks. If the player has acquired that character’s individual Rage specials, one can be used. If two or three characters are Sparking together and use the correct attack techniques, the moves will combine into something that looks neat and is stronger than the sum of the individual attacks. The only problem with these Sparking combos is the lack of an in-battle guide to them, forcing the player to remember which characters and moves are required.

The Rage meter decreases if not used after battle unless certain Capsules are employed. Capsules occupy the lower screen outside of battle and have effects upon the party as a whole, differentiating them from the accessories that are limited to one person at a time. A Capsule’s effect may be to make various icy, electric, fire-ridden or poisonous floors safe to travel — or it can make hit points recover outside of battle. By the end of the game there will be four Capsule slots that can be switched among easily, since some item effects only occur if using the top Capsule and not the others that are deemed Standby. The Capsule system is enjoyable to tinker with, and it allows for a fair amount of say by the player in how exploration goes. The menu system as a whole is intuitive also, since the equipment in the game has its effects clearly labeled and can usually be used by any character.

The player also has a great share of the say in how characters develop. After every battle Action Points are awarded, and the player can use them either to learn/enhance the techniques of characters or to alter their statistics. Each technique or statistic enhancement does have a ceiling on its increase, but maxing everything out will take quite a bit of time. Character statistics that increase after battle can also be adjusted somewhat by the player. 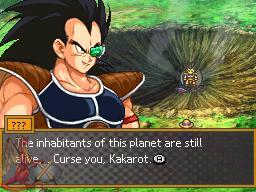 Remember the plot of Dragon Ball? I hope not, that way the text will seem fresher.

Outside of battle, Attack of the Saiyans mainly distinguishes itself visually by having very small sprites. It is during combat that the graphics take a big turn toward impressiveness. Every attack by the protagonists and the enemies is fluidly animated, and there are a lot of attacks to see. Character sprites change based on what they are wearing (determined by the plot, not the player) to further vary what is seen.

Attack of the Saiyans‘ audio is mostly a treat. Some of the compositions heard while exploring dungeons are not interesting, but most are, and the battle music is uniformly very strong. There is a little voice work heard during battle from the Japanese cast of Dragon Ball Z, and their work is very strong.

The ability to grind at any time along with plentiful healing points makes Attack of the Saiyans‘ difficulty surmountable at any time, though it can certainly be made hard by anyone seeking a challenge. The game can probably be completed in around twenty hours, though there is plentiful material that pops up toward the end to draw out that time. Replay incentive is essentially nonexistent though, since everything in the game can be experienced the first time through.

The last time a Japanese developer made an RPG out of Dragon Ball, it was Dragon Ball Z: Legend of the Super Saiyan, and Attack of the Saiyans is unquestionably better than that game. It may not mean much to Dragon Ball neophytes, but can certainly be played by them, while veterans of the series will find much to like. It isn’t perfect by any stretch of the imagination, and its choice of storyline from the series makes a sequel unavoidable, but at last a worthy RPG featuring Akira Toriyama’s magnum opus has been created.