If This is Wrong, I Don’t Want to Be Right

Isometric PC RPGs from the old days were leaden and difficult, combining horrible inventory restrictions and convoluted interface mechanics with unexplained progression systems and vague, if not outright misleading, plot instructions. But we loved them. With a player’s experimentation came victories and failures — both fun — and the openness and highly creative writing kept us glued to PC screens. There have been precious few games in this style since the Infinity Engine went extinct, and only Dragon Age: Origins successfully fused a modern RPG with traditional mechanics. This was the promise of Divinity: Original Sin: create a classic-style CRPG including all the good things, upgrading the bad ones, and squeezing in fun new stuff. The result is overwhelmingly successful, leaning heavily on an older style of RPG to the point that it will leave Infinity Engine fans much happier than those who equate WRPGs with Dragon Age and The Elder Scrolls.

From a role-playing standpoint, Larian Studios introduces a new gimmick right at the start. Divinity: Original Sin has two protagonists, not one, and the player is encouraged to invent distinct personalities for them in conversations. NPCs frequently ask the protagonists for their opinions, and dialogue options allow them to disagree with each other and even have side arguments bickering over the topic at hand. NPCs often respond differently based on how the protagonists react and if they are in agreement. This can impact quest results as well. For example, an early quest gives the protagonists the option to rat out cowardly soldiers. The player can role-play that one character slants toward honesty while the other has a live and let live mindset. In-game, they can disagree with each other, then settle it with a rock-paper-scissors minigame, after which the conversation plays out according to the winner’s way. Furthermore, the protagonists gain traits based on their dialogue choices throughout the game. Traits give bonuses to different stats, so a pragmatic character will get a crafting boost while a compassionate one will get a charisma boost. It’s a fun system that brings role-playing to a new level and allows co-op gamers to both give their voices to conversations.

The protagonists are Source Hunters who track down and destroy anything that utilizes tainted, evil Source magic. Sent to Cyseal to investigate a murder involving Source, early on it is made clear that these Source Hunters were once immortal beings somehow related to the end of time, and the story progresses these three main plotlines in tandem: the murder mystery, exterminating Source, and preventing the end of time. Intentional or not, Original Sin stays true to classic CRPG norms by having a ho-hum, unoriginal story but making up for it with outstanding writing. The NPCs, sidequests, dialogue, and books in the game bring creativity and entertainment where the main quests do not. There are hardly any throwaway lines in the game. Whether the Source Hunters are talking to an unsinkable cat who quips that zombies are unnatural because, while cats can have nine lives, humans should only have one, or a sexually frustrated torture device who laments that she penetrates men instead of the other way around, the writing is consistently smart, fun, and crazy. 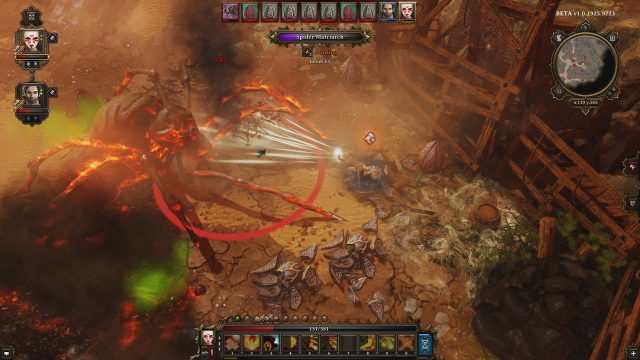 A party of two will be S.O.L. against bosses. They won’t survive this turn.

Dialogue isn’t always fun and games, though. Dozens of quest-related conversations require a Source Hunter to win a game of rock, paper, scissors to get his way. Failing the minigame can result in missing necessary quest info or getting attacked by people who should realistically be less trigger-happy. There are no quest markers in Original Sin, and detailed instructions are frequently given only once and then not logged in the journal. At some point in this eighty-hour beast, players will get lost, confused, or forgetful about a quest. On the bright side, it’s 2014 and the internet exists, but Larian could have done more to keep valuable quest information from disappearing from the game world. Many quests can be completed in more ways than one, which sometimes feels like a moral choice, and other times comes down to “which method can I still actually accomplish?” Despite these frustrations, the game is very open, many of the main questlines can be completed in any order, and the lack of linearity and encouragement to experiment and explore are all strengths as a whole. From the moment the Source Hunters enter Cyseal, there are multiple dangling carrots just out of arm’s reach, and it gives the game an addictive quality that makes it hard to stop playing.

Nowhere does the game encourage old-school experimentation quite like it does in the turn-based battle system. Centered on using, combining, and abusing elemental and environmental effects, Original Sin offers a plethora of skills that interact in powerful and sometimes accidental ways. A geomancer can dump pitch on enemies at the start of a turn to slow them down. The hurt comes when a pyromancer takes his turn and lights the pitch on fire with a flare. Now the slowed enemies take fire damage from the flare, explosion damage from the pitch igniting, and are in a fiery maelstrom that is inflicting damage every turn. It’s fun to execute and never gets old. Of course, there will be facepalming times when the player shoots an enemy with a lightning bolt, forgetting that it’s late in the battle and blood is everywhere. Blood conducts electricity. When the enemy is hit, it electrifies the large pool of blood on the ground and stuns the entire party standing in it. Oops. Combat is balanced so it’s never easy for long, and Larian assumes the player is intelligent enough to do things like summon rainstorms when fighting fire elementals and have more than one party member capable of healing. Bosses provide tough, memorable encounters where the odds are stacked highly against the party. If it’s too much, there’s always mid-battle quicksave abuse and the option to lower the difficulty.

The progression system, like combat, is open and unguided. Preset classes at the start of the game suggest level one builds, but you’re on your own after that. Growth comes in four types of stats. Attributes like strength and dexterity are focused on combat abilities. Everyone might want some constitution and speed, but the stats specific to melee, ranged, and magic damage need to be in line with chosen skills. Separate from attributes are abilities that cover specific weapon and magic skills, saving throws inside and outside of battle, and crafting. The wide options here provide the most opportunities for error, but having different characters focus on different abilities is a good start. A third type of growth comes from infrequent talent selections, like perks in Fallout. Finally, traits granted to characters based on personality types exhibited in dialogue give bonuses. Up to two additional fighters can join the party, and the player controls their growth too. There are two potential companions in the opening town who participate in dialogue throughout the game and have fleshed out characterizations. The Source Hunters can also recruit party members from a large variety of henchmen in a guild hall later, although henchmen don’t talk or have personalities. 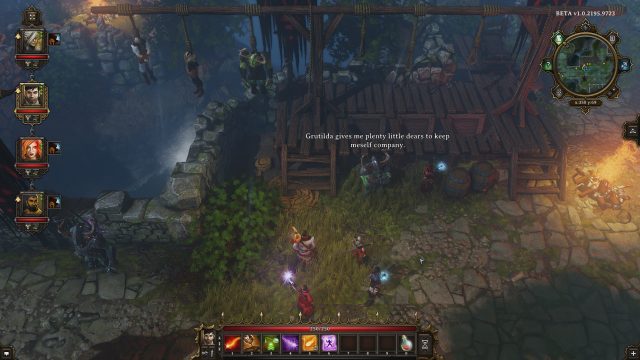 An orc’s best friend is a human hanging on a noose.

Rating Original Sin‘s old-school cred brings both blessings and curses. The upgrades to the battle system greatly augment and improve upon anything seen in an isometric turn-based game before while still keeping the feel and flow of the genre. Every fathomable modern convenience is there, from exact movement distances with action point costs to an interface that can be navigated with a mouse or a smorgasbord of keyboard shortcuts. Unlike in older CRPGs, enemy encounters are well planned and paced to stay fresh without dragging down the game. A typical path might have six diverse enemy packs and take an hour and a half to navigate whereas an older game would have neither the diversity nor the light-handed monster count in a similar situation. The art direction is nothing special, but the visuals emphasize clarity and exactness so the player knows right where an electrified puddle ends and can always understand the surroundings. Voice acting is limited, which works in a genre where role-playing is encouraged and dialogue choices are so open. The orchestrated music is simple, as expected, but complements the game well, adding to the experience rather than serving as ignorable background sounds.

To the curses, the inventory system is still problematic. There’s infinite physical space limited only by each character’s max encumbrance, but there are hundreds of crafting recipes that might require an odd ingredient, and there are items and red herrings that might be needed for a quest later. Although inventories can be filtered by type and sorted, finding something in the hoard — and Original Sin strongly encourages everyone to be a hoarder — still comes down to visually scanning through rows and rows of pictures of items. Randomly generated loot is a mixed bag. The randomness works, but there’s so much of it that a greedy player will be teleporting to town every hour to cash in. As previously mentioned, the old-school quest designs lead to frustrating moments when instructions are unclear or forgotten. The world is filled with traps and unexplained puzzles, many of which must be navigated and solved to finish the game, and some spawn monsters or kill party members every time they are failed. Stealth mechanics have an unwelcome appearance. Metal Gear Divinity is not a game that should exist. Again, it is 2014, the internet exists, and someone, somewhere might love the lever puzzles and invisible, five-pixel-wide buttons that only appear when a high perception character rubs against the wall they are on, but these are places where the game could have come up with some modern updates to old mechanics.

This all leads to a tough conclusion, or at least a fragmented one. Fans of old CRPGs will absolutely love Divinity: Original Sin. The modern improvements, new ideas, and abundant care from Larian Studios, who already released a meaningful patch while I was playing it, make it the best classic-style CRPG ever made. Those fans should take this review as a 5/5 and play the game as soon as possible. Unfortunately, for less tradition-oriented gamers, for those who disliked ’90s WRPGs and Infinity Engine games, Original Sin intentionally put itself on the fence for this crowd. It has enough old-school annoyances to make it tricky to universally recommend, and the methodical pace — there were times where I played for five hours and felt like nothing was accomplished — lack of quest pointers, and lack of guidance overall will exclude a large subset of RPGamers despite the strong battle system. Unless one of the older mechanics is a total deal breaker, there are enough improvements here that even someone who dislikes CRPGs could find a new love in Divinity. It’s not as modern as Dragon Age: Origins, but it’s worlds ahead of Baldur’s Gate II.