A Dragon Flight With Clipped Wings

Divinity II: Ego Draconis is a large, complex game which promises many things, but often delivers only halfway on those promises. There are genuinely enjoyable experiences in the game, but between these experiences lie stretches of frustration and even boredom. This inconsistency plagues most aspects of Divinity II, from graphics to story to combat, creating the impression of a game that could have been far better than it is.

The player character in Divinity II starts off as a Dragon Slayer, an elite warrior dedicated to wiping out the Dragon Knights who apparently murdered the Divine, a revered ancient hero. Through a series of obvious plot twists, the player ends up becoming a Dragon Knight, complete with the ability to turn into a dragon. The player is given the task of destroying the demonic Damien, who ranks among the dimmest of the dim in the history of idiotic Big Evils. The number of times in the story that Damien has the unfettered opportunity to kill the player character, but does not do so, stretches one’s willing suspension of disbelief to the limit. Between Damien’s uninspiring presence and the fact that all of his evil acts occur offstage, the main storyline generally feels hollow. Numerous plot holes and head-scratching developments also keep the player from becoming fully immersed in the story.

Instead of stemming from the main plot, Divinity II‘s greatest appeal comes from minor quests and characters. The game would have excelled as a humorous romp, as it boasts a cast of amusing minor characters with some social satire thrown into the mix. Unfortunately, it falls flat as the fantasy epic that it aspires to be, failing to provide the player with a strong emotional connection to the world and the main character. At the end, it becomes clear that the game suffers both from “middle book syndrome” and from a crippling illusion of choice. Though the player has the opportunity to make a large number of choices throughout the game, those choices almost never have an impact beyond the completion of individual quests. No choice that the player makes can alter the outcome of the plot, and the end of the story is rather unsatisfying, as it feels incomplete and is clearly meant to lead into the next Divinity game.

It is difficult to summarize Divinity II‘s gameplay, because so many different gameplay elements are introduced during the course of the playthrough. The game’s main strengths are its exploration opportunities and customizability. It’s an explorer’s dream, with sidequests and secret caches of loot hidden everywhere. Going off the beaten path is not only rewarded, but is to a certain extent required, as players need to level up as much as possible in order to survive. Fans of character and gear customization will enjoy those aspects of Divinity II as well. The game is basically classless, and any character can level up any combination of skills and special attacks from an extensive offering. All of the gear in the game can also be used by any character, and gear can be customized via enchants and socketed gems. Min-maxers can tinker with gear to their heart’s content, especially after the player obtains a tower at the mid-point of the game. The Battle Tower contains gatherers, trainers, and crafters who provide customization of skills, gear, and the player’s necromantic pet, and is instantly accessible to the player at any time after it has been obtained. 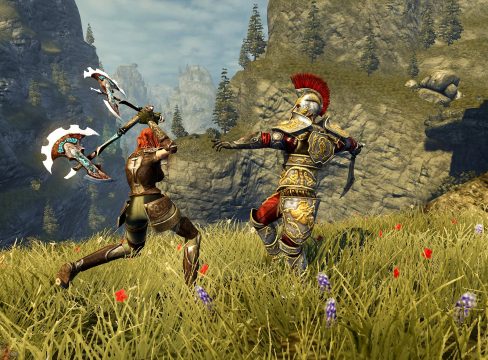 Not pictured: 3 archers and a healer behind the guy in the tin suit.

Divinity II‘s main gameplay problems are its uneven difficulty and other frustrations surrounding player interaction with the combat system. The game’s difficulty curve is more like a set of stairs than an actual curve, causing combat to be frustratingly difficult at the beginning of most areas and yawn-inducingly easy by the end, only to jump back to being difficult once the player enters the next area. The combat is real-time and as long as the game is patched, it controls well and is responsive to commands in combat. The ability to lock on to a specific target would have been greatly appreciated, however. Enemies are selected by hovering the mouse over them, and it’s very easy to move the mouse off one’s desired target or have that target obscured by other enemies. The game is particularly fond of throwing large groups of ranged enemies at the player, and ranged attacks often cause the player character to grunt and flinch, spoiling the rhythm of combat and leading to battles where the player character is effectively stunned while being constantly pounded by enemies. Some attacks can be dodged, but most seem to home in on the player even if s/he attempts to strafe or jump out of the way. Most enemy groups come with a healer, which must always be killed first and can make already-difficult battles virtually unwinnable during the difficult portions of the game. Topping off the combat frustrations are several boss battles with very annoying mechanics, such as a “protect the spellcasting NPC” battle in which the enemies spawn from all directions, and a single hit on the NPC restarts the battle.

The game’s problems are magnified when the player gains the ability to transform into a flying dragon. Most disappointing is that dragon combat and ground combat are completely separate. The dragon can’t even see ground-based enemies, much less attack them, but is instead pitted against gigantic, powerful siege engines. Because of this, the player never feels powerful as a dragon, even though the game’s narrative constantly attempts to reinforce the idea that the dragon is extremely powerful. Dragon combat involves either the destruction of siege towers or aerial dogfights, which can be particularly frustrating due to the lack of ability to lock onto enemies. There is one section of the game in which the human/dragon dichotomy shines, involving the invasion of gigantic flying fortresses. The fortress defences must be taken down piece by piece, and require alternating between dragon form and human form. For the rest of the game, however, dragon gameplay is somewhat underwhelming. 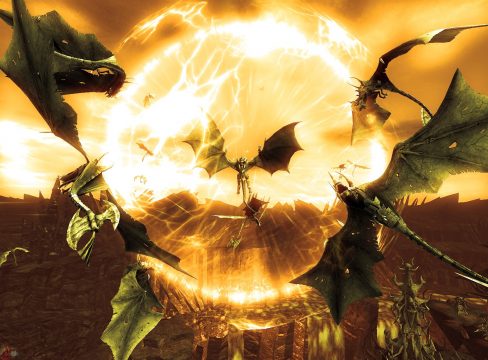 The world of Divinity II can be quite attractive, especially during the first half of the game which features a lush, handcrafted wilderness area. Flowering fields, waterfalls, and pine-flecked mountains create some stunning vistas, and are peppered with secret caverns and dungeons which are a delight to explore. Unfortunately, as the player enters evil-ravaged areas later in the game, the environmental graphics falter. Unfortunate choices with lighting effects cast a dull, monochromatic sheen over many areas, greatly reducing the visual interest of even impressively designed areas such as flying fortresses. The game’s character models are about average for a Western RPG, generally unremarkable but sporting some jerky animations. A few major characters are well-designed, but most characters recycle the same small set of faces, clothes, and haircuts.

Sound design is one area that can be praised without reservation. The background music is well-crafted and atmospheric, setting the mood of various areas without being intrusive. The voice acting, while of varied quality, is never distractingly bad. Several voice actors, playing characters such as a sarcastic female dragon and a lispy stitched-together necromantic servant, turn in particularly strong performances.

There is fun to be had in Divinity II, especially in terms of exploration and customization. Unfortunately, the game’s poorly plotted story and uneven difficulty will challenge the patience of most players, even those who enjoy parts of the game. The game is long, easily stretching to sixty hours, and the player can’t take many shortcuts due to the need to level up as much as possible to survive. Although I mostly enjoyed the first half of the game, I thought its weaknesses multiplied during the second half. It ended up feeling like an extended slog punctuated by fun moments and moments that caused me to yell at the computer in frustration. Divinity II is worth a look to players who love exploration and customization, but it requires a lot of patience and a willingness to tolerate its many foibles.