Dex was the recipient of a successful Kickstarter campaign, and in an effort to give it the broadest possible audience this previously PC-only title has been released on other formats. The “enhanced edition” for the Vita is an interesting game with a lot to admire, even if much of what it attempts could have been done a bit better. The technical problems of this version make it tough to recommend for anyone with an alternative way to experience the game though, and artificially lengthen the time that will be spent playing. I’ve certainly seen bigger failures of quality assurance, but Dex on Vita needed more than it received.

Dex is named after its protagonist, a young woman awakened in confusion by nighttime intruders in her 2037 apartment complex. A voice in her head is identified as that of Raycast, a mysterious and extremely respected hacker. Following Raycast’s directions, Dex escapes and seeks aid from others in figuring out what forces seek her capture. A shadowy and gargantuan organization known as The Complex is eventually fingered as the culprit, and figuring out a way to deal with whatever its forces send after Dex is necessary.

Dreadlock Studios developed Dex, but the company’s location in the Czech Republic did not result in an incoherent or garbled script. Events involving sinister corporate agendas, the ethics of cloning, surveillance by unanswerable entities, hacking and more are all effectively brought up. The narrative does not achieve superlative status by dealing with these issues in breathtaking ways, but neither are the scenarios it presents uninteresting or hackneyed. Numerous side stories that deal with additional issues such as genetically modified foot patenting and the entrapment of sex slaves with drugs are presented, and these do a fine job of further developing the game’s world. Certain details of its mechanical workings seem unlikely based on the present technological trends, but this is nevertheless a worthwhile place to explore. The only disappointment comes from the fact that only NPCs with some kind of quest to offer have any words to impart, leaving the numerous pedestrians ambling past as just pieces of flavoring with which there is no interaction.

Exploring the world is primarily done in the style of a 2D platformer. Dex runs around and jumps, with the ability to haul herself up when catching onto the edge of a ledge. Some care does need to be taken when descending from heights, because Dex can get killed from too great a fall. More exploration than combat will take place, but the foes who do appear are dealt with through fisticuffs or deploying weapons. Guns need ammunition and require multiple shots to take down a target, while beating the snot out of an enemy also takes quite a few blows. The most effective method is to take down unaware opponents with their backs turned, which is accomplished in a single swift action. Otherwise fights tend to drag on longer than ideal, since enemy AI is not good enough to make encounters feel interesting. The experience gained from quest completion and enemy killing grants Dex the chance to put points into numerous skills that significantly affect how the game plays, such as being able to install multiple implants or increasing her ability to pick locks. As enemies do not reappear once slain, there is no way to grind for every possible upgrade, forcing the player to make careful choices about how to proceed. 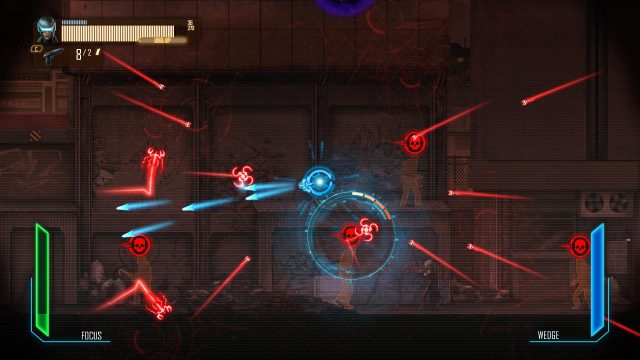 Only the color scheme is in any way reminiscent of Tron.

Not all combat takes place in the real world. Dex is capable of sending her a projection of her mind forth to hack machines and immobilize adversaries in the real world, along with navigating the environs of computer databases to hack their contents. Doing this transforms the game into a shoot-em-up with Dex’s mental projection represented by a circle that can spin its turret in any direction to fire upon whatever gets in its way. Being destroyed while hacking something results in being kicked back to Dex’s body and taking damage, but completing the procedure for information is mandatory in order to progress the narrative numerous times. Several skill upgrades enhance the firepower and defenses available in cyberspace, helping to make hacking more manageable later in the game.

Dex has a number of positive features to mention, but the Vita version has issues that detract seriously from the experience. Its load times are frequent and dismaying, to the point that the Vita’s screen may automatically darken because the player has no reason to touch anything. A few load screens are short, but they are the exception and should not be expected. A worse ailment is the repugnant tendency for crashes, which are most common when transitioning to a different area but could hit at any time — such as during the credits at the game’s conclusion. Dex automatically saves when moving to different sectors, but when the save is preempted by a crash plenty of progress will be lost. Another problem comes from brief freezes the game experiences, which make a big difference when onscreen action is taking place and the freeze throws off one’s timing.

An odd mechanic seemingly borrowed from Die Hard on the NES finds Dex unable to see what is in large areas of the screen until she has line of sight, but this system makes no sense whatsoever when something is shooting her from artificial blackness that is a tiny distance away or her head is directly underneath a catwalk without being able to discern anything. Other oddities relate to the Vita in particular, such as a sloppy inability to see all of the text descriptions for some items simply because a way to make the rest of the writing fit onto the screen is not present. While a fast travel means of instantly switching to different areas is present, it requires flipping through five other menu sections because a shortcut for this handy function was not included. There are also times at which the game world isn’t zoomed in enough to make out the tiny text on certain pieces of writing, which should have been an easy fix. 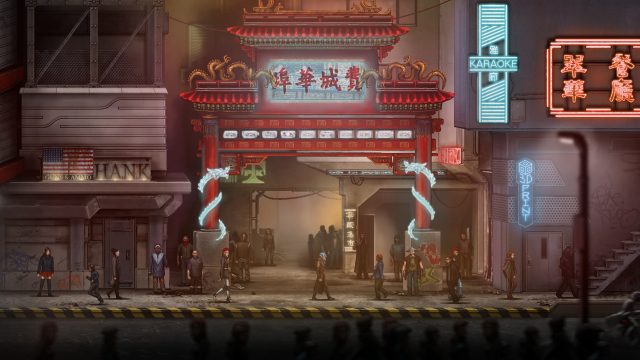 Sadly, the karaoke option is never made available while playing.

All its side material can double Dex‘s length, but completing it in twenty or fewer hours is still likely. The game’s length is of course artificially increased on Vita due to the load times and crashes. Its difficulty is irregular: while enemies can hit hard and there is no recovery time when taking damage, their lackluster AI often makes the job simpler. Walking over their dead comrades elicits no reaction from these enemies, and running away to heal is usually a viable tactic in order to come out on top.

While not a standout in terms of its visuals, Dex does deliver an effectively presented world. Animation is fluid and the locations distinct, once the loading times that come with any transition have occurred. Every line of text from an NPC is accompanied by strong voice acting, though the wide variety of accents and speech styles doesn’t always fit the game’s shadowy future setting. Most of the music is also pleasing to the ear, with some tracks standing out more due to plenty of atmospheric compositions that aren’t designed to be memorable by themselves.

There were many times when I started to become invested in this game’s world, and enjoyed what it had to offer. Then one of the issues unfortunately present in the Vita version would stop me in my tracks. After about the twentieth crash that forced me to restart the game and endure its beginning load times once more, all the mercy had left my system. Dex is an interesting title that ought to interest many — just not with the Vita version.