The NES had a sizable library of titles in every genre, and action RPGs were no exception to that rule. Crystalis graced the system in 1990, but was granted the rare feat of being remade for a later platform. The Game Boy Color rendition of Crystalis is somewhat different from what had been seen on the NES, and has a less vocal fanbase today as a result of the changes. The game is still entertaining enough to make me wish developer SNK had tried a few more action RPGs, though it’s nothing amazing enough to leap in front of everything else out there.

Crystalis begins with a young man awakening from a century of hibernation. He was put there when the planet suffered through the apocalypse, and civilization’s reconstruction is far from complete. His awakening nevertheless is necessary in order to defeat the forces of evil that would enslave the human race, and this empowered fellow is the one person able to stop this nefarious plot. The setting is interesting and certain moments along the way are intriguing, but the story as a whole is not as captivating as it could have been. Part of that stems from the limited text most 8-bit titles displayed, but some of the material seems to have been negatively altered from the NES rendition of this game.

The hero’s journey to save the planet is accomplished mostly by plunging his sword into the many nasty creatures found in the countryside. Crystalis varies from many action RPGs by having no alternate weapons from the standard sword type, but instead has four elemental varieties of blade to switch between. Each elemental sword also has charged attacks of varying strength that travel across the whole screen, and are essential if avoiding direct contact with status ailment-inflicting enemies is to happen. A number of magic spells will be learned as the adventure progresses, and the use of whichever one is equipped takes up the other action button on the GBC.

The formula of killing things quickly is executed effectively enough to make it through the game. Very few enemies require more than two or three hits to defeat, although in turn many of them have projectile abilities to make life interesting. Pacing is a strength here, as relatively little time will be spent in any area before moving on to another. Levels come quickly and each one makes a noticeable difference in combat performance, and the variety of things to kill is high enough that fatigue with the current selection of opponents doesn’t have a chance to set in. Finishing the whole game can be done by knowledgeable players within an afternoon, and while newcomers will take longer to do so, even the most leisurely trek through this game will take less than ten hours. 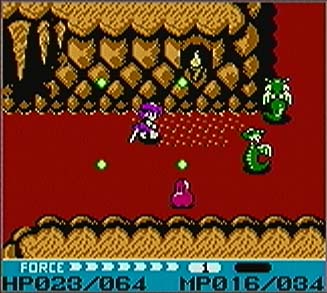 Winged snakes spitting stuff is not a particularly common complaint.

SNK unfortunately altered the screen size when bringing Crystalis to the GBC, and the result is a view too zoomed-in to allow much warning time before bumping into things. The hero moves quickly, and it requires split-second reactions to stop without harmful collisions. This also makes boss arenas rather cramped areas in which very little room for error is present, a particular danger with one opponent that rolls around the screen very quickly and is already a source of extreme danger. This cramping can be dealt with after a little acclimating to the screen size, but it never feels ideal.

Crystalis possesses a sizable inventory for an action RPG of its age, and using some of the items in it proves confusing. Figuring out what is currently equipped can be difficult due to the menu using a slightly different shade of icon edge to indicate whatever is selected, but that different shade still appears if something has been removed from active use. Otherwise the menu is effective and quick to use, which is vital since it will need to be accessed very often.

Regular enemies are easy enough to vanquish most of the time if one is not charging thoughtlessly ahead, but the bosses can be nasty. Some are quite simple to beat with correct knowledge of their patterns, or by using the Ys stratagem of grinding up a couple of levels to eviscerate them. The aforementioned rolling boss is the nastiest customer in the game, but most other late opponents are neutered by a Barrier spell that can block any projectile from doing damage. This spell eats through MP quickly, but well-timed use of it is a great way to stay alive. Crystalis also allows the player to continue if beaten, with the only price sometimes being the return to an area’s beginning. Such things allow it to be beaten by anyone with sufficient incentive.

You say that, but you’re not trying to physically throw me out – mixed signals!

Crystalis had most of its audio replaced for the GBC, and the result is unfortunately not very memorable. Its tunes are not necessarily outright bad, but they’re uninteresting and bland. The visuals are mostly the same as the NES save for the zoomed-in view, and look fine without straining the hardware in any way. Plenty of enemy sprites are on display though, and most of the dungeons and environments manage to look distinct without resorting to repetition of the same visual elements.

The original version of Crystalis is the one that receives most of the acclaim due to the changes made, but even this less-esteemed rendition offered its share of rewards for me. This game has a following that has remained intact over the years, and I can see some of what the fans do after my excursion with it. Though its GBC incarnation is not a great action RPG, it does enough things right to be worth investigating by anyone who is intrigued but hasn’t yet taken the plunge after all these years.