Where Mario and Castlevania Collide

When Konami released Castlevania: Symphony of the Night, the series shifted from extremely difficult 2D sidescrollers to an exploration-based RPG style reminiscent of Super Metroid. Castlevania: Portrait of Ruin follows in the footsteps of these forbearers to give more of what fans have been used to for years.

The story begins in 1944. The world is torn by war, and all the death, pain, and destruction has once again summoned Dracula’s castle to give humanity its last push into ruin. This is where Jonathan Morris comes in. He is the inheritor of the Vampire Killer, a whip that has the power to banish Dracula, but he doesn’t know how to unlock its power, even with the help of his constant companion Charlotte Aulin, a young girl gifted at magic. The pair enter the castle to fulfill Jonathan’s destiny without the power of the whip only to find that Dracula isn’t there; there is a new vampire named Brauner that is famous for his demonic painting abilities. Brauner plans on using the power of Dracula’s castle to take over the world, so the young pair of heroes explore the castle with the intent of preventing the vampire’s nefarious scheme from coming to fruition.

To do this, the youths will have to not only explore Dracula’s castle but several of Brauner’s paintings as well. In what seems very inspired by Mario 64, Jonathan and Charlotte will have to enter paintings to destroy the monsters within and remove the dark power emanating from the portraits. These extra dungeons make this game easily larger than any of the other handheld games in the series, meaning there is much more exploration to be done. 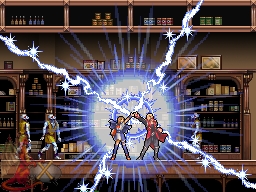 Those that have played any Castlevania games will immediately be familiar with most of the controls. The new additions center around having a partner. The touch of a button can change characters, use your partner’s equipped ability, or combine for a devastatingly powerful attack. Most everything is standard Castlevania fare with almost no use of the touch pad in the main quest. This comes as both a plus and a letdown since Castlevania: Dawn of Sorrow had a couple interesting uses for the touch pad, but even that game didn’t have anything really earth shattering. It would have been nice to see a new use for the functionality in the first playthough, but those that finish will have ample opportunity to use their stylus on subsequent trips through the castle.

The graphics in Portrait of Ruin don’t push what the system can do, but all of the environments are well detailed and diverse. There is, however, a nice anime opening that plays when the game is turned on that is impressive for the DS. But the main problem with the graphics is that even though the sprites used in the game move well, fans of the series will immediately notice that the majority of them have been lifted pixel for pixel from previous entries in the Castlevania series. Considering how much of the game involves slaying monsters, more new ones would have been a very nice touch. 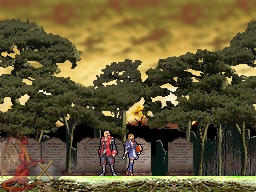 I TOLD you we should have asked for directions!

Quite possibly the one area that the game shines the most in is the music. Traditionally, trips trough Dracula’s castle have been accompanied by great music, and Portrait of Ruin does not fail to deliver in this regard. Every region of the castle and each of the portraits the duo enter has its own theme. The songs never seem to get old even if the player lingers in one area for a while. The sound effects serve the game well, but none really stand out as fantastic.

Those looking for an amazing story in Portrait of Ruin will find the game lacking, but the series has never really been about the plot. The game is not without its twists, but little changes from the beginning. You are there to destroy the evil within the castle. Incidentally, it’s nearly the same plot of every other Castlevania game in existence with a pair of new faces.

The game can be finished relatively quickly, but that’s only if you consider the in-game clock. If one includes the extra time of being killed by bosses before the necessary patterns are learned, the time required to finish could balloon as high as twenty hours, especially if one tries to finish all the quests. Most will find that ten to twelve hours is sufficient to complete the game, but considering that there are extra modes unlocked after the first quest, there is a lot of replay potential. One could easily sink forty hours into the game to play all of the available content, and there is also an online co-op mode for players that have friends with another copy and a wireless access point.

In the end, those that finish Castlevania: Portrait of Ruin will find that it is very much more of the same, but that’s not necessarily a bad thing. Though more new monsters would have been nice, the extra modes at the end make the game worth playing through a couple times. It’s certainly not reinventing the franchise, but it isn’t hurting the name, either.