Castlevania: Circle of the Moon Review

The last time I was in America, I grabbed up all the old GBA titles that my brother and I had kept in a box in a shared closet, with the intent of playing through them either again or for the first time. One of those was Castlevania: Circle of the Moon. I might have played it before, but if I did then it was over fifteen years ago and I didn’t get far. I made the decision that this would be my time to finish it, especially after I’d checked the prices in the local stores and realized it was a  five thousand yen (roughly $50) title in Japan.

Is it worth the price? Honestly, no, but I’m hardly an aficionado of the series. All I can say is that for someone with limited experience with Castlevania or its style of play, it did not turn out to be as entertaining as I would have desired.

The setup for Circle of the Moon is both simple and well laid out in its opening moments. Years before, Dracula was sealed away. In the here and now, someone is working to undo that seal — and in fact, she’s practically succeeded at the very start. All that is needed is the blood of the Count’s nemesis: the previous Belmont, who conveniently arrives with his son Hugh and apprentice Nathan in tow to do battle with the darkness. Yet, with a sweep of his arm, Dracula consigns the two youths to the abyss beneath the castle, while the elder Belmont is held captive for the ritual at the full of the moon. In the depths, Hugh goes his own way, leaving Nathan the protagonist to fend for himself. This remains the majority of the plot for over three-quarters of the game.  It’s sufficient to justify the action, but it also serves as a reminder that narrative has never been a strong point of this series. 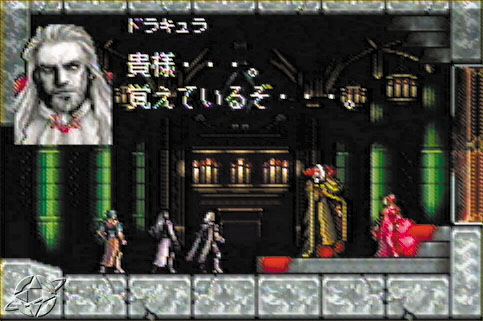 Oh, great. Dracula remembers me. That is never a good sign.

The bulk of a Castlevania title lies in its gameplay, and while Circle of the Moon delivers a decent take on the signature castle, it largely keeps things traditional. There are no real surprises to be had in its exploration, unless one counts the extraordinarily bad surprises of some of the nasty unique enemies secreted away in side corridors. For the most part it’s a simple matter of running, jumping, and whipping one’s way through hordes of monsters.

Would that the hardware were up to the task. Playing this game on a Game Boy SP is not the best introduction to the series’ brand of action. Between the inevitable dimness of the SP display and the cramped positioning of its control buttons, the already rugged slope of the game’s difficulty curve turns into the cliffs of the Carpathians, especially with some of the more dodge-tastic later encounters. Again, veteran vampire victimizers likely won’t have too much of a problem, but for beginners like myself, the game is as unforgiving as the undead.

Three things should offset this innate difficulty. The first is the leveling mechanic, which does its job well enough while being only mildly grindy. The player has no say in point distribution, though it is possible to further upgrade health, mana, and hearts for sub-weapons through the discovery of booster items throughout the castle. If all else fails, grinding until the next challenge is trivial becomes a viable strategy. 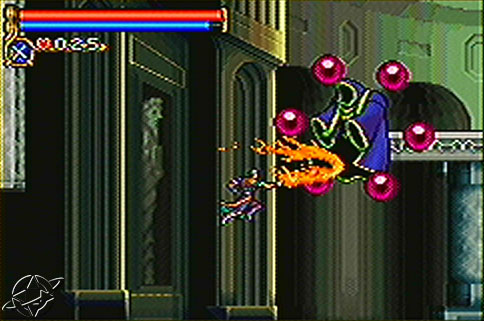 Don’t bother dropping that cloak. My inventory’s got enough of them already.

The next thing is, unfortunately, not a viable strategy: consumable items. To put it frankly, the item drop rates in this game can be absurd, with little sign that the developers put any thought into it. Healing items, which should have been the first and best offset to difficulty, are hard to come by. In fact, in my playthrough I saw exactly two higher-power healing items, and barely more than a dozen of the 10-HP-a-pop potions, yet by the end I had eighty leather armors, an item which is useful for only ten minutes at the start of the game. I also possessed multiples of many other equippable items, most of which were redundant before I even found them. A shop where one could sell excess equipment and purchase the good healing items would have been appreciated — almost as much so as a better item drop-rate and distribution.

The third supporting pillar of the game suffers from similar drop-rate issues, though in this case it’s a feature. Sixteen specific enemy types throughout the game have a low but set chance of dropping enchanted cards, which can then be mixed-and-matched for a wide variety of effects. These allow for a diversity of play styles, and some can be life-savers in specific situations, but they still need to be found first, and that can be annoying to the point of guide-dang-it for the last few. 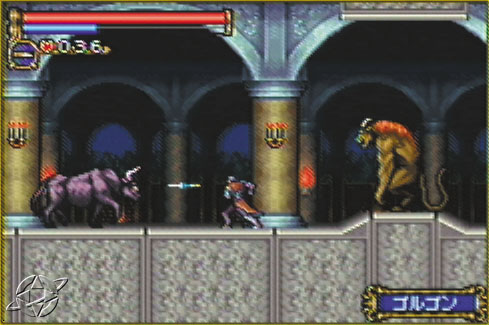 Cows should drop hamburgers, and yet do not.

For those who find this game less challenging than I did, however, there are also optional play styles that can be unlocked via the name screen at the start of the game. Entering specific names, rewarded through subsequent playthroughs, can result in Nathan having drastically different point spreads in his stats, as well as bonuses for different combat options. This greatly increases the replayability of the game, since the paradigms can shift so much.

Graphically, Circle of the Moon does about as well as might be expected of a game with grim, dark color palettes on a Game Boy SP screen, which is just one more reason to play it on something else.  The enemies are varied, interesting, and articulated in their sprite-work, but none of that matters much if the screen itself is working to make them hard to spot. Likewise, the sound quality suffers, and the SP speakers hardly do the classic Castlevania soundtrack justice.

In the final assessment, Circle of the Moon delivers exactly what hardcore fans of the series might want in terms of challenge and tactics, with its card magics and multiple play modes, but it’s still a by-the-numbers variation on a theme that’s more challenge than a beginner might like. Would it be worth five thousand yen? Not to me, but obviously it commands some respect among Castlevania enthusiasts. More telling is that the other two GBA games of the series go for eight thousand yen apiece.

I don’t think I’ll be getting either of them anytime soon.