Financial Advice May Not Be Applicable Elsewhere

For something that feels like a successor to Final Fantasy: The 4 Heroes of Light, and was originally intended to be just that before Square Enix changed its mind, it is rather surprising that Matrix Software wasn’t the developer. Instead Silicon Studio, known previously for 3D Dot Game Heroes, got the job of making Bravely Default, and did a fine job with the assignment. Bravely Default is an effort designed to appeal both to those who remember the early years of Squaresoft and more recent generations of RPGamers, and actually succeeds in achieving most of what it attempts.

Young shepherd Tiz was tending his flock as usual, when a gigantic chasm welled up from inside the earth and swallowed his hometown. As the sole survivor of this destruction, his attitude is understandably confused until philosophic thoughts are purged from his mind by the incursion of Eternian troops. Their goal is the capture or incapacitation of Wind Vestal Agnes Oblige, who has the bad luck to be in the area to scout the great chasm’s appearance, and reluctantly accepts the aid Tiz wholeheartedly offers. Soon they are joined by amnesiac would-be ladies’ man Ringabel, and the conscience-plagued daughter of a high Eternian leader, Edea Lee. This quartet takes on the task of reviving the four crystals around the world and hopefully countering the horrific environmental deterioration visible everywhere, with the help of a fairy named Airy concerned for the world’s welfare.

In its early going Bravely Default feels like a more verbose rendition of the type of RPG story seen in the early 90s. The colorful gallery of villains on display is what keeps this early portion interesting, with most of them being over the top and exiting before their characterizations become annoying. The narrative becomes more involving as the game progresses, and its later stages introduce an intriguing science fiction element. Cutscene direction is lackluster for the most part with its focus on characters standing around and talking with occasional hand gestures but little additional movement, which is disappointing considering the many opportunities for more visually interesting storytelling that were ignored. The tale itself is fortunately engrossing enough to keep this from being a major issue, and the addition of Tales-style optional dialogues among the core cast helps to flesh out the protagonists.

When it comes to engaging the many opponents in their path, the quartet of heroes must best them in random turn-based combat. What at first glance appears to be a standard system actually has a few interesting wrinkles, the biggest one being the Brave and Default commands. By using Brave it is possible to act up to four times in a row, but if the characters have not accumulated sufficient points to do so, they will be rendered immobile punching bags for the enemy. Accumulating points can happen via several mechanisms, but choosing to Default action for a turn gains a point and otherwise acts like the Defend choice. This mechanic is an interesting one that makes battle quite involved, and naturally many techniques require more than one BP to activate, forcing the player to make intelligent decisions. 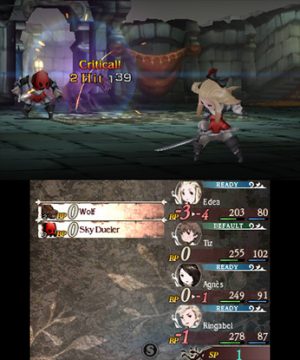 Why is the Sky Dueler paired with a wolf? Well, he was a lonely guy, and after months of staring at nothing but the sky it was pretty risky to let him loose in a zoo…

Combat has a number of other features that keep things interesting, such as the action component of special moves. Upon activation a character’s special move starts a unique battle theme playing for roughly ninety seconds, during which certain actions are enhanced in effectiveness. In an interesting effort to incorporate the 3DS’s internet connectivity, Friend invites sent out are reciprocated with avatars that can be used once for a unique action in combat.

These options are supplemented with a job system that greatly affects what the characters can do in battle. Descended from the versatile ability structure seen in Final Fantasy V and the Final Fantasy Tactics titles, characters can have the abilities of another class to select in battle along with those of the current job. The protagonists are also able to select a number of passive facets from all the jobs they have been learning, a total that increases to five as the narrative progresses. Abilities are learned from gaining job point rewards after battles, and just as in other games with widely varied job systems the temptation to run around getting into fights solely to learn new things is hard to resist. Most of the jobs are obtained from side quests rather than being bequeathed at set points in the narrative, giving enormous incentive to explore a bit.

Bravely Default includes an option that titles with random battle systems would do well to copy wholesale henceforth, giving the player the ability to set the rate at which enemies appear. There are only five options, but they range from zero encounters to being assaulted every few steps, granting plenty of latitude to the player. The difficulty can also be adjusted at any time, along with whether the party stops raking in experience, money, or job points as rewards. The developers deserve credit for including such a wealth of options on how the combat will proceed.

Due to its narrative, Bravely Default midway through starts offering the same bosses to battle again. While most of these fights can be skipped after the first time through, a certain quartet of them will be seen many times if the player wishes to experience the true conclusion. The bosses get stronger but use the same moves, making these repeated encounters blend together in the mind. Needing to navigate the same locations is similarly wearying, though fresh palette-swapped opponents attempt to make the treks feel a bit distinct. The reasons provided by the narrative make slogging through this portion more interesting, but the game would have been improved by more concision in its second half, especially when the player is required to mash the X button in order to untaint crystals a great number of times. 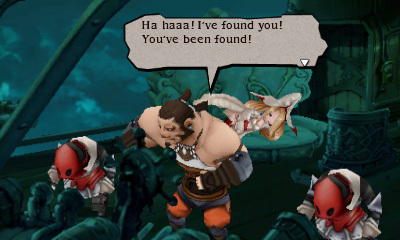 Just to look at Barras here, his great skill at flower arrangements and other interior decorating might not be obvious.

Square Enix employed good performers to bring the characters to life with voice acting, and their work is effective. The protagonists sound stereotypical in the early going, but later scenes give the actors a chance to bring more nuances into their characterizations, while the antagonist actors are effective in their varied styles. The music is a spectacular effort from composer Revo, sporting engaging battle themes and many involving compositions for the places visited. A few more dungeon themes would have been appreciated, especially in the later treks through places seen earlier, but the tracks on offer here are uniformly worth hearing.

Bravely Default‘s visuals clearly demonstrate its evolution from the 4 Heroes of Light style, particularly in the appearance of its humans. Though their models are somewhat more detailed than what the DS could have produced, the people rarely have expressions and their often-spindly limbs could make movement difficult. Environments are well-realized and the different jobs outfit the characters in a variety of distinctive clothing, showing pleasant graphics in the process. While the 3DS is not pushed hard by these visuals, they acquit themselves well.

Ignoring side content whenever possible to finish the game can probably be done in around forty hours, but investigating everything available will cause that time to rise past seventy. Since many of the early optional material leads to useful job acquisition, speeding past it is unwise. The adjustable difficulty is a boon, but certain bosses are capable of punishing the unprepared regardless of how hard they are able to hit. The game handles defeat by tossing the player back to the last save spot, though that may not be very far since automatic saving with each new room entered is the default option.

Bravely Default can be taken as a confirmation that Square Enix still makes games for the RPG audience which don’t require mobiles. While the game is not at such an amazing level of quality that it eclipses everything else around its release, this is nevertheless a reason for 3DS owners to be very happy. European RPGamers already know this, based on the number of people I’ve seen from the EU when sampling the online functions, and North Americans now have the chance.