Square Enix released new information and a large batch of new screenshots and artwork detailing several aspects of the upcoming Bravely Default II. The unveiling included eight new jobs, looks at two of the game’s new kingdoms and their citizens, and details of several game systems.

The Troubadour is a support job that uses the power of poetry to aid its comrades in battle through status effect skills. The Beastmaster is a flexible job that utilizes the power of captured monsters, making it useful as both an offensive and defensive fighter. Gamblers use luck-based skills to take a chance on causing big damage to enemies. Berserkers are straightforward powerhouses, hefting a large axe to cause as much pain as possible. A Red Mage is an all-round magic caster, employing both offensive and healing spells. The Hunter analyzes its enemies, using its trusty bow to pierce foes’ weak spots. The Shield Master is a defensive-minded party member, protecting allies by wielding a large shield. Finally, the Pictomancer nullifies its foes, using paints to debuff enemy forces.

The game is set on the continent of Excillant, which is divided into numerous unique countries like the Drought Kingdom, Savalon, which turned into a desert 200 years ago. Now, underground water veins have been discovered that threaten to submerge the kingdom instead. It is ruled over by a council currently controlled by wealthy merchants who put profit above all other considerations. Working to counteract this are the country’s First Prince Castor, his younger brother, Second Prince Boor, and Chief Archivist Andro. A prominent feature of Savalon is magnificent casino like https://tridewi.xyz/, owned by council member Bernard Alphard, who is also the one who discovered the underground water veins. Bernard is the Thief Asterisk Holder; his casino employs Troubadour Asterisk Holder Olfa Dragordia, Gambler Asterisk Holder Shaula Clarence, and Beastmaster Asterisk Holder Nihal. 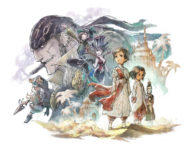 A number of gameplay systems have also received a bit more detail. Jobs have unique Special Moves that can be activated in battle under certain conditions, having an immediate effect while also bestowing benefits upon the party that last as long as its accompanying background music continues to play. The Beastmaster’s Special Move, “Let’s Do Our Best Together!”, summons a large number of monsters to damage foes while increasing all allies’ physical and magic attack power. The White Mage’s “Sacred Light” recovers ally HP and cures status ailments, while continuously increasing physical and magic defense power. By mastering jobs, characters learn Support Abilities, which can then be equipped regardless of the character’s current job, like the Monk’s “Empty Handed” which greatly increases damage output when unarmed, and the Black Mage’s “Aspir Attack” which restores MP based on physical damage dealt. Field Actions are ways to influence the tide of battle before it even starts; for example, slashing a wandering enemy with a sword lets the party start battle with an additional Brave Point.