Bloodstained: Ritual of the Night Review

Not a Belmont in Sight

What Koji Igarashi used Kickstarter to partially fund is not a new Castlevania game, because the rights to that property are owned by Konami and not being used for anything.  As has been demonstrated over the years, making a Metroidvania is completely acceptable for other entities than Konami, and there is nothing wrong with the man who popularized the concept itself via Symphony of the Night doing such a thing. It’s also completely acceptable for this title to be a thoroughly enjoyable Metroidvania with ample attention to detail that is rewarding to play, because Konami itself is certainly not going to create anything in this vein at present.

Bloodstained: Ritual of the Night contains no series characters and does not ever mention Dracula. Its heroine Miriam is exploring a massive structure overrun by demons that she is unable to completely reconnoiter at first. She must do battle with a variety of opponents inside to gradually earn new abilities that allow her to reach new parts of the sizable real estate. Far from being a monolithic stone fortress, this castle contains various sections with different terrain such as a frozen cave and a subterranean waterway. Plenty of things await the attentive player who keeps an eye open for goodies off the beaten path, and exploring the entire place is a thrill.

Miriam has a number of ways to fight the adversaries out for her blood. She has a huge potential arsenal of weapons to employ, ranging from firearms and spears to axes and whips. Miriam also has the ability to obtain certain special abilities, such as generating ice crystals or spewing poisonous acid. Such techniques deplete her magic points, but these automatically replenish over time and are often just the thing to get through a dangerous pinch. 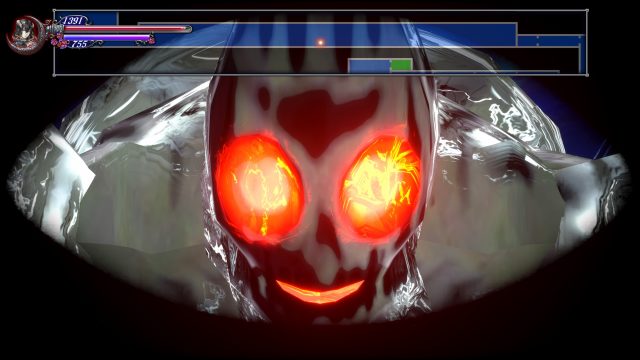 Abilities come in such a wide variety of forms that other types outnumber those for direct combat application. Passive increases to particular statistics, or enhancements to Miriam’s aptitude with specific weapon groupings, can be very useful. Special moves in the vein of fighting games are also present, and while they’re initially attached to specific armaments can be mastered for more widespread use.  Miriam can interact with certain parts of the environment if she has the necessary technique equipped, and several familiars that cost nothing to deploy will also be found. Mixing and matching these abilities provides an entertaining variety of options for dealing with the tricky scenarios presented.

Obtaining the option to use most of these assets is accomplished by killing enemies, which have a set item drop rate the player can see. This unfortunately means that sometimes killing an enemy repeatedly in search of a rare drop is required, though such a mechanic is seen in many other games as well. A few commodities are only attainable in this way, necessitating grinding for players trying to find everything.

Such a wide gamut of things to obtain and use means that inventory management is key, and Bloodstained fortunately has that covered pretty well. The ingredients necessary to create goodies via fusion and what each enemy drops are just some of the many factoids stored and ready for examination. A comprehensible and easily accessed map is also among the handy interface aspects incorporated. The only issue comes from the sheer quantity of information to be found and sifted through, though having too much material is generally preferable to having too little.  A more aggravating problem is occasional technical difficulties, such as the plague of slowdown that rears its ugly head on occasion.  A bizarre issue that sometimes occurs when voiced dialogue does not match the text onscreen is puzzling for its sheer inconsistency. 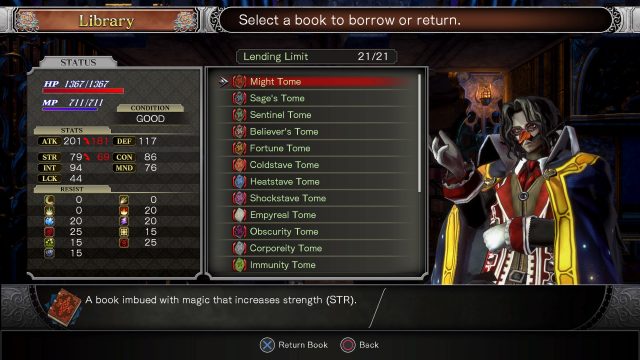 Let all those who do not understand how to use library materials be forewarned.

While unforgiving for those with inadequate response times, Bloodstained on the normal challenge is not a particularly difficult title in the Metroidvania realm. Certain bosses and adversaries are powerfully destructive, but save points and healing items are regularly available. A few optional foes put up quite a stiff fight, and seekers of a challenge can tackle two higher difficulties. This title also does not provide a cushion for acting recklessly, and death equals a Game Over.  There are a few points at which progress requires exploring options without a great deal of direction, and this may tempt use of a FAQ.  The experience as it stands can be completed in under twenty hours, but additional content is in the works to perhaps induce additional time for the future.

Ritual of the Night‘s narrative finds Miriam aboard a ship transporting her to a location in eighteenth century England with a significant demon presence. Miriam has only recently awakened from ten years of sleep, and her former friend Gebel is suspected of instigating the current demon incursion. Both were part of an experimental Church program that bound shards obtained from demons to humans in an effort to quell a prior attack, but almost every other Shardbinder died in the attempt. Miriam soon meets Gebel in the flesh and learns that he is indeed the originator of what currently plagues a swathe of land, and she determines to fulfill her vow to do what must be done for humanity’s protection.

This tale does a good job of setting the scene and moving things along, but as with most titles in the Metroidvania vein, does not provide a compelling reason by itself to continue playing. Character development isn’t something that occurs much, and when it does the changes are quite sudden. This narrative isn’t necessarily terrible, simply not the focus of the game.  Miriam does get to show some wit in her conversations, which places her above many Castlevania protagonists of the past. 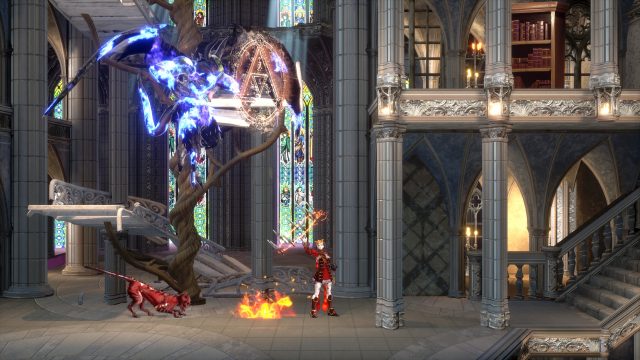 There comes a time at which peaceful negotiation has failed. Miriam has passed that time.

Ritual of the Night‘s spiritual forebears are obvious in its visual presentation, especially from a few adversaries that are quite clearly inspired by infamous Castlevania creatures. Ritual nevertheless exhibits an impressive level of detail in its environments and enemies. Everything Miriam can equip has a different visual, something that gives her character an enormous variety of animation. Subtle details are apparent upon close examination and the care taken with creating this world results in a sumptuous feast for the eyes, at least among those who appreciate impeccable 2D visuals.

Something most Castlevania titles in the past featured was memorable soundtracks, and Ritual of the Night is determined to uphold that standard. Numerous tracks that touch a variety of genres are heard during the adventure, providing a strong complement to the action. Sound effects are also impressive, showcasing distinct enemy death screams and a considerable panoply of weapon types. Lots of voice acting is also present, and the pronounced British accents used by this cast reinforce the setting. Individual performance quality varies somewhat but is mostly solid, even though the speech patterns bring to mind an Oliver Twist adaptation.

Anyone who never liked the Metroidvania entries in the Castlevania series is extremely unlikely to be enthralled by Bloodstained. Koji Igarashi made no intimations of reinventing the wheel in Ritual of the Night, and the game is recognizably from the creator of Symphony of the Night. Playing this game nevertheless reminded me of how much fun a quality Metroidvania can be, and Konami is certainly in no mood to use its own intellectual property for anything other than Pachinko machines lately – plus if it had, something like paying money for additional save slots might have been introduced. Kickstarter-funded games have a decidedly mixed record, but Bloodstained: Ritual of the Night is fortunately one of the success stories.