Take a Look at Your Precious Prince Ali

Somehow a game titled The Story of Thor in both Japan and Europe got localized as Beyond Oasis for the North American market. Sega’s 16-bit console had a larger RPG library than it’s sometimes remembered for nowadays, and this gave the console a well-liked action RPG that never became a sales juggernaut. My own experience with the game is less adulatory than most who have played it, and only now did I finally persevere in completing the title after several abortive attempts. Beyond Oasis is noteworthy for a number of reasons, and while I don’t think it’s among the pinnacle of Genesis RPGs, it’s interesting enough to be worth a look.

A prince named Ali happens upon a golden bracelet while exploring a cave. Upon returning home with his fascinating find, Ali runs into a group of soldiers menacing the people of his kingdom. After vanquishing the ones in the area, Ali hears from his father that the only way to deal with this evil incursion is to use the bracelet’s power to activate spirits and use their abilities. It seems that a silver bracelet was also found, and its wielder will stop at nothing to unleash the ancient evil Agito upon the world again.

Even considering when this title was released, its text is sparse. Ali is a plucky youth and the silver bracelet’s wielder is really nasty, while further plot development comes from a princess kidnapping and not much else. This is not inherently a problem given that Beyond Oasis never tries to sell itself on the terms of the infrequent story, but anyone playing the game for its narrative will get perhaps two pages’ worth of text and no more.

Ali negotiates with the hordes of evil using force instead of words. His standard weapon is a dagger that will get the job done most of the time, but swords, bows and arrows, and bombs are also found to give him more varied weapon tactics. All armaments save the dagger will wear down and break with repeated usage, so knowing how to use that implement is a good idea. Ali can also pull off a jumping kick and squat to deliver attacks at a low elevation, along with a couple of moves that rely on specific D-pad motions, giving him a sizable arsenal for a hero in this vintage of action RPG. Other weapons are also supplied in just enough quantities to make trying them out a viable procedure. 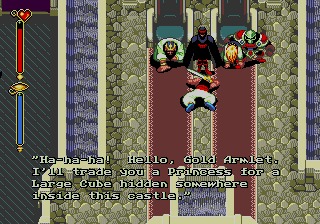 You will? Well, that’s nice, Large Cubes just clutter up the place.

Little control quirks make playing troublesome at times. The biggest relates to the limited number of buttons on the original Genesis controller, which forced jumping and ducking to both be assigned onto C. Holding just a bit too long results in ducking down instead of a jump, and the lack of a dedicated input for the purpose is probably why Ali cannot get up from being knocked down directly into a prone posture without fully standing first. Since enemies are not dangerously overpowered, and death deposits Ali back at the beginning of an area with no consequence, having fun with the combat is nevertheless easy, and the game’s brevity means getting bored is unlikely.

Magic in this world comes about by the unique means of summoning spirits that then follow Ali around. Four spirits are in the game, each of which can be used for fighting but is vital at certain points to open new areas. Once summoned a spirit hangs around the screen slowly using up MP, which depletes much faster when Ali commands the entity to do something, and vanishes when nothing is left to sustain its presence. Most of the time summoning these spirits is simple, though the occasional need to properly coincide action with an erratic droplet of water falling from above is troublesome. Mandatory spirit use is limited to fairly basic puzzle-solving situations such as lighting torches and crossing gaps, but having the extra participants around is a nifty way of broadening the possibilities for progress.

The paucity of text can be confounding at times, but a handy marker on the map always shows the next destination even when that location has barely been mentioned. A few bosses are troublesome and regular enemies can be mean, yet healing items are plentiful enough to make persevering simple. The game’s method of increasing Ali’s HP is annoying, however, as it relies upon hearts dropped by enemies that disappear after a few seconds just like most other items. Few items picked up during the game’s course come with any kind of text to explain what they do, making Beyond Oasis even sparser with such things than its peers — though experimenting is a perfectly viable means of learning what pickups do thanks to their frequent appearance. Most of the mandatory items are keys at any rate, which perform the standard function of unlocking doors. 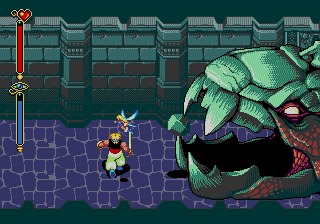 This thing is a little less intimidating when the rest of its body never shows up.

Yuzo Koshiro composed some of the most memorable music the Genesis produced, but his usual style is not in evidence here. Instead a variety of atmospheric compositions were used, though the hardware’s ability to produce the instrumentation is sometimes lacking. While the breadth of tracks is impressive for a fairly short game, they aren’t very memorable. An equally impressive assortment of sound effects accompanies the action, showcasing the enemy rogue’s gallery quite well. Among the sound effects are two that annoy whenever Ali is low on HP or MP, and will not cease until that status is cured.

For something released late in the lifespan of the Genesis, Beyond Oasis looks quite good. While there are a great number of palette swaps to differentiate foes encountered a little later, much of what is depicted demonstrates the hardware’s capabilities when solid developers worked on it. Certain bosses that take up the entirety of the screen are particularly impressive from a technical standpoint.

Some swear by this game’s superior quality, and after finally committing myself to its completion I understand what makes it memorable. I wouldn’t place it among the upper echelon of RPGs even if just the Genesis’s library is considered, but its merits are nevertheless strong. Beyond Oasis is a unique creation, and one that has unfortunately been forgotten by Sega in the past two decades except for re-releases.