It’s clear that a lot of effort has gone into setting up the battlefields and that everything is there for a purpose.

Developer Vestaria Project’s inspirations aren’t hard to see. Led by Fire Emblem series creator Shouzou Kaga, the Vestaria Saga tactical RPGs very much harken back to the early titles in that series, for better or worse. Though originally labelled in Japan as a Gaiden (side story) title, Vestaria Saga II: The Sacred Sword of Silvanister is very much a direct sequel to the first game, and given such billing for its western release through DANGEN Entertainment. After going through the first few hours and half-dozen missions, it’s apparent that it’s very much one for fans of classic tactical RPGs, and though newcomers can certainly jump in here, they should be prepared for a highly challenging time.

Vestaria Saga II takes place following the events of Vestaria Saga I: War of the Scions and gives players a brief rundown of what happened so that any newcomers are readily caught up. Protagonist Zade has decided to leave the capital of Meleda so as not to act as a distraction to his brother. However, he swiftly manges to become embroiled in a new set of conflicts and noble intrigue. The early story is built around traditional medieval alliances, loyalties, and betrayals, though there are few hints at darker fantasy elements behind the scenes.

Although the story setup isn’t the most exciting, one thing Vestaria Saga II does well is incorporate narrative elements into the gameplay. There are event scenes between maps to set them up, but the game is much less about characters demonstrating their power in cutscenes and more about players doing the work to make things happen, such as escaping from a powerful dragon or going on a stealthy rescue mission. Maps quickly expand in size and get more complicated as the game progress, but will also task players with reacting to events as they happen. 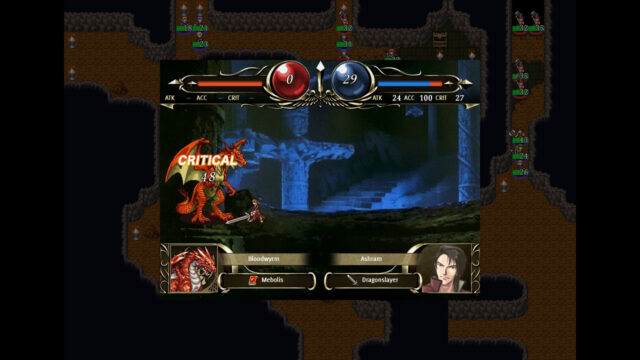 The basics will be very familiar to tactical RPG veterans.

Any veterans of early Fire Emblem games will feel right at home; the only thing missing is the weapon triangle. Each side takes it in turns to move their units, each unit able to move a certain distance and getting a single action per turn. Only certain units can move after their action, which can be spent attacking, using an item (which can be freely traded between adjacent units), or performing a contextual option such as opening a door. Maps might have towns or other locations players can get information or items from.

When it comes to offense, the attacking unit generally goes first, with the defending unit able to counter afterwards as appropriate. Some units may be able to do multiple attacks or have other strategic considerations. For example, archers cannot counter melee attacks, while certain weapons are more effective against different enemy types. The game gives a preview showing the expected damage, hit chance and number of hits, and critical chance, meaning players readily know if their attack is likely to be useful to them and can plan their turn accordingly.

While there also doesn’t appear to be anything akin to Supports, there are a number of unit-to-unit conversations available, readily listed in the combat menu when available, some of which can lead to recruitment of new units. Another recruiting method applies to certain marked enemies, which can be captured by Zade. This can be somewhat tricky to pull off, however, as it necessitates the unit is brought down to single-figure health before Zade tries to get them to surrender. Even without these options, the roster expands quickly and players will soon need to make choices about which units to bring into battles. 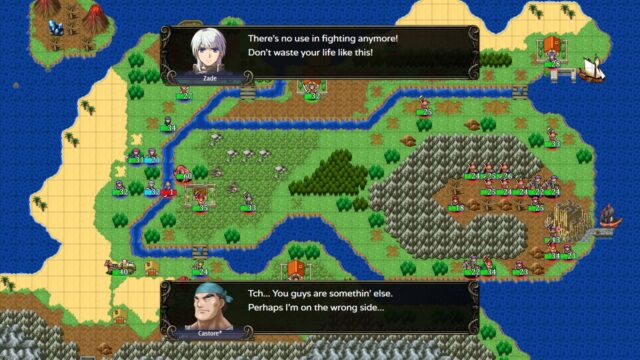 Certain units can be captured and recruited, though it can be tricky to pull off.

The game offers a good mix of unit types from the outset. The only equipment comes through weapons, which fill the same set of available slots as usable items. Like Fire Emblem, units only gain experience from attacks or skill usage, so there’s a balance needed rather than trying to rely on one or two units to do the bulk of the work lest others be needed later on. The game also includes randomised level-up bonuses; it’s possible for a level-up to include no stat changes or a good number of them, though it’s hard to judge how big of an impact the level-up procedure has on the difficulty balance given the already tough challenge the game provides.

As mentioned earlier, Vestaria Saga II’s greatest strength comes in its map design. It’s clear that a lot of effort has gone into setting up the battlefields and that everything is there for a purpose. Environments have a big impact on how far units can move — for example, roads can be speedily traversed but forests take much longer to get through — and some units cannot pass through certain terrain types. It may well be quicker to try and go around rough terrain rather than through, but conversely the extra protection it offers a unit may be critical for surviving an attack.

With it so closely emulating Fire Emblem games of yore, it’s not too surprising that the drawbacks are also very much the same. Permadeath is very much present, and any unit that is slightly misplaced — or simply the victim of an unlucky hit — will be swiftly dispatched by the enemy and is gone forever, potentially warranting a reload. Thankfully, Vestaria Saga II includes the option to save at any point, but losing a unit is still frustrating when it happens. The game also places severe restrictions on certain important actions that unnecessarily slow down progress. There are a number of things in early missions that only Zade can do, meaning a lot of turns are spent with everyone standing around while Zade steadily moves between them. 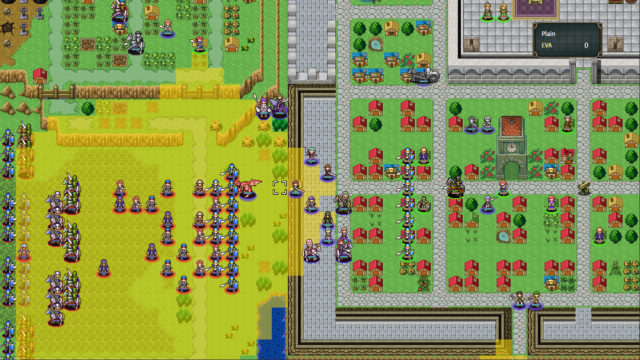 Maps start off straightforward but quickly get quite sprawling.

The game was previously stated to come with two difficulties, though that has ended up being a single “rebalanced” difficulty. While the challenge feels fair on the early missions, it swiftly ramps up heading into the sixth mission, and players should be prepared for even tougher battles going forward. The challenge will be part of the appeal for many veterans, but given the possibility of multiple difficulties was brought up, it’s a bit disappointing that there isn’t a friendly way for others to be able to enjoy the map designs in a less stressful manner, and it makes it very difficult to recommend to genre newcomers.

Vestaria Saga II very much looks the part of a classic SRPG with its sprites and 2D tiled environments. Its graphics are very much function over form; the animations do the job of differentiating the various units, but certainly aren’t flashy or impressive. The background music offers an appreciable backing without standing out too much, and the sound effects are also functional without impressing. For those wanting to play on Steam Deck, it’s not officially supported at the time of writing but appears to work without any specific issues.

It’s hard to say anything about Vestaria Saga II without bringing Fire Emblem into it, but the game seems perfectly happy with that. It’s very easy to see the appeal for those who enjoyed the earlier titles in Shouzou Kaga’s previous series, and to appreciate the effort that’s gone into the crafting of its battles. However, it’s also not an approachable title for newcomers to the genre, and is more than ready to throw them into the grinder.