Thirsty Suitors brings a lot of style that should give it plenty of justified attention.

From its announcement in December, Annapurna Interactive and Outerloop Games’ Thirsty Suitors has stood out with its influence and exploration of South Asian culture, played up through striking visuals and style as renegade protagonist Jala makes her return home. Ahead of the game’s appearance this week at the Tribeca Festival, RPGamer was given the opportunity to learn more about through a press briefing and Q&A session with Outerloop Games’ co-founder and creative director Chandana Ekanayake.

Chandana Ekanayake gave a walkthrough of the game’s Tribeca demo, which is around thirty minutes long and covers its introduction. It begins as Jala makes her way home to Timber Hills on a reconciliation tour following a(nother) bad break-up. On the bus ride to Timber Hills, she takes a quiz determining her “Thirstsona”, represented with a dive into her psyche as some on-rails stakeboarding takes her between dating-focused questions while her inner narrator casts shade on her answers. These answers set Jala’s starting points in the game’s three Thirstsona categories, which in turn determine her combat abilities and skills while acting as a form of choice tracking throughout the game. 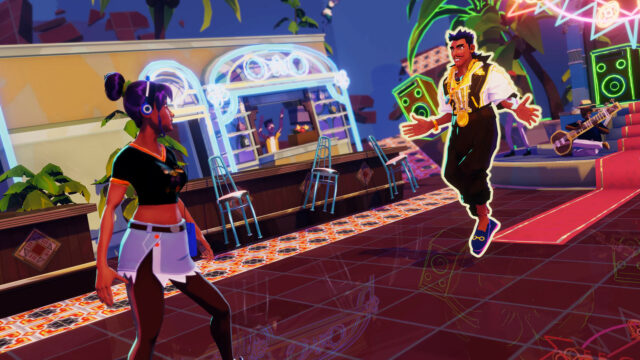 The first of Jala’s exes.

Jala then arrives at a diner with the challenge of finding someone to give her a lift to her home. Fortunately (or not), she soon meets her third-grade boyfriend, Sergio, who very much still harbours a flame for her. This leads into a back-and-forth conversation before “battle” breaks out. It plays out with a turn-based system as Jala and her opponent trade barbs, trying to reduce the other’s HP to zero. The introduction battle steadily walks through the various elements and tactics; particularly finding enemy weaknesses, putting them into relevant states, and using skills to take advantage of those. It includes quick-time elements, with button presses to mitigate damage from enemies and unleash fully powered skills.

The combat shares vibes with Persona 5′s boss combat. The example battle has multiple stages as it quickly ends up in Sergio’s “inner world”, where he powers up to become his ideal self. Fortunately, Jala has powerful summons herself, with the demo having her bring her own mom into the fight. Eventually Jala wins, allowing her to decide how the battle finishes, in this case allow her and Sergio to move on as friends. There’s some interesting contextual in-battle banter that helps punctuate combat, although its introduction moves along slower than it needed with the tutorial prompts included as well. Jala’s actions and conversation options during the combat reward specific Thirstsona points, with additional bonus points able to be freely assigned. 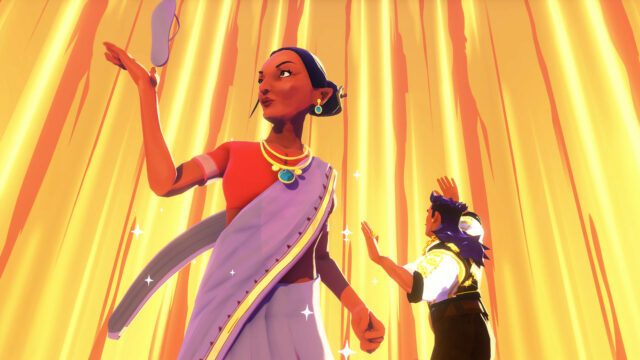 It’s difficult to glean too much into the story at this stage, but the opening sets things up well. Jala very much comes off as a flawed protagonist having to deal with poor decisions in her past. The same goes for Sergio, who starts the battle as a disconcerting idealiser of toxic masculinity until the outcome of the battle gives him a much more level head. The post-demo scene, gathering all of Jala’s exes hints at the subsequent challenges and burned bridges awaiting her. Although not billed as a dating game per se, Chandana Ekanayake describes it as focusing on repairing relationships, to this end there are multiple endings available including some including romance options.

Thirsty Suitors brings a lot of style that should give it plenty of attention. The graphics are a distinctive blending of 2D and 3D art styles with vibrant colours, environments, and animations. Its rhythmic music — composed by Ramsey Kharroubi (Boyfriend Dungeon) — immediately stands out with its ’90s pop and hip-hop influences, providing a very earwormy backing. Meanwhile, the game’s combat does a neat job matching its quick-time elements to the musics rhythm. The game is fully voiced and the performances in the demo are all solid. 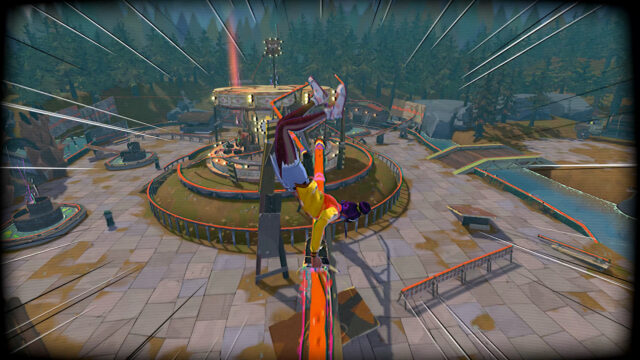 Skateboarding and cooking are other major parts of the game, though not demonstrated in the demo.

A playthrough is currently expected to end up at around the six-to-ten hour mark as players deal with Jala’s six exes, as well as skateboarding and cooking sections. Players can also deal with an assortment of random suitors and undertake additional bonding and quest opportunities. The combat will expand from one-on-one battles with Jala having to face up to three opponents at once. The demo didn’t give any insights into how substantial the skateboading and cooking sections are, nor any of its open-world traversal, though Chandana Ekanayake promises that though the story is largely linear, players have plenty of things to see and do if they to explore everything the game has to offer.

What I’ve seen so far from Thirsty Suitors has very much caught my attention. Chandana Ekanayake underlines that it’s a personal story rather than attempt to convey all of South Asian culture. But in addition to giving players an opportunity explore a culture currently underrepresented in games, the game has a great audiovisual style that I’m looking forward to seeing and hearing more of. Thirsty Suitors is development for PC, though a release window has not yet been announced.