For better or worse, Mary Skelter Finale is very dense.

Compile Heart is a developer whose ability to produce a consistent output cannot be questioned, even if the reception to its titles is highly varied. Its dungeon-crawling Mary Skelter series is noteworthy as one of its better received ones. Offering a curious take on fairy tales in a disturbing setting, the series has made it to trilogy status with Mary Skelter Finale attempting to place a nice bow upon it. In the end, the game is one that should have plenty of fans among the hardcore dungeon-crawling crowd, but has limited appeal outside of it.

Following some timeline adjustments over the previous two games, Mary Skelter Finale takes place after Mary Skelter 2′s adjusted ending for Mary Skelter: Nightmares and immediately acts to overwrite any sense of positivity. After escaping their underground prison, Jack, the Blood Maidens, and their allies emerge onto the surface, only to find it filled with piles of corpses. They are swiftly attacked by a murderous group called Massacre Pink, who kill many of the group’s nameless followers, and defeat seems imminent. A powerful magic spell fortunately allows the group to escape, but scatters them in the process. The separated members eventually congregate into three parties that work up through a series of interconnected towers to rejoin forces while trying to find a way to stop the destruction heaped upon the world. 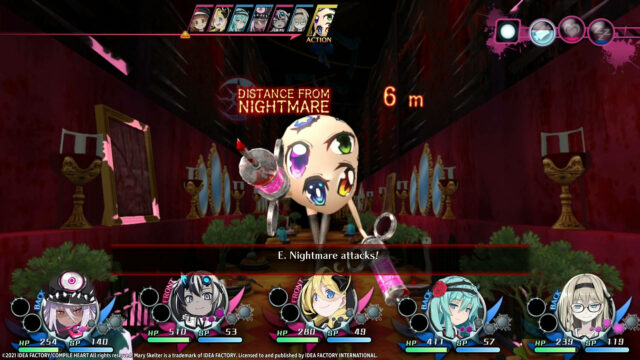 The towers come with plenty of bizarre-looking threats.

Although it is a direct sequel, Mary Skelter Finale offers opportunity for newcomers to leap in by converting its previous games into visual novels. However, this swiftly becomes more of a chore than it needed to be as players are simply given a menu listing every scene, which must be selected individually with no indication of how important or useful to the story each one is. It feels much easier and time-effective to just find a brief synopsis and jump in from there without losing too much information. Finale expects players to be somewhat familiar with the previous events, character relationships, and the natures of the Blood Maidens, though it offers enough contextual information so that newcomers with just a rudimentary knowledge won’t be too lost.

There are some new characters introduced in Finale. Mary is a take on the little match girl and joined by her companion Charlotte. Meanwhile, Toh is a mysterious young man with the same powers as Jack and who is searching for his wife. Pyre is a member of Massacre Pink, who is definitely not suited for the role and quickly falls in with the Blood Maidens. Finally, sisters Riley and Ellie make their mark later on in the game, acting on their own accord as they attempt to survive in the apocalyptic world. There’s not much of an actual plot for the most part; the main bulk of the narrative are scenes that expand upon the character relationships while the groups advance through whatever towers they end up in. These are perfectly enjoyable, if sometimes meaningless, but the game is let down by major pacing issues. Players will have to undertake many hours of dungeon-crawling before being dumped with an extended number of scenes, most of which do little to drive anything forward in the story.

For better or worse, Mary Skelter Finale is very dense as a dungeon-crawler, making it a more attractive proposition for hardcore dungeon-crawler fans than those with more of a passing interest. Given the challenge of handling fifteen playable characters, the game makes all of them important by grouping them into three separated parties of five members, each conveniently ending up with an additional appropriate character in the hybrid leadership-support role. Players are forced to swap between the parties at various points as each one will find switches or keys that open doors for the others; doing so will leave the existing party member where they currently stand, letting them be zapped back to immediately without losing any progress. 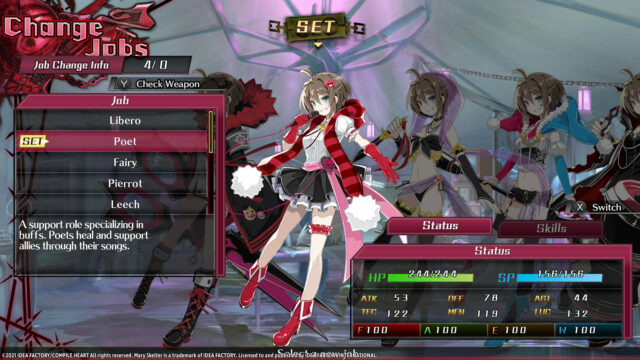 The job system is one of plenty of deep systems within the game.

Mary Skelter Finale contains a turn-based combat system that plays out much like others of the sub-genre. Turns are taken individually, with the order placed at the top of the screen. Each party member has a number of actions, with the leader also able to get in on the action in their support role (also being the only one able to use items). While the basics are straightforward, combat has multiple things that come into play, both inside and outside of it. Without getting too bogged down in details and listing everything, players have to consider blood splatter, which causes party members to enter a powered-up Massacre mode or the dangerous berserker Blood Skelter Mode depending on their level of corruption, as well as potential status effects and action-blocking Babymares that are tough to remove. Meanwhile, item farming lets players obtain copious amounts of equipment with various potential bonuses, and leveling up gives characters points to spend on job abilities with the option to level down characters so they can re-level more quickly to learn yet more abilities. Players can also change character jobs and have other methods to grant new abilities or upgrade equipment.

The game’s difficulty is very forgiving in the introductory portion, but quickly jumps up once players progress to the meat of the game, especially when enemies with devastating party-wide attacks appear. This makes it very much one for those who like spending time interacting and getting the most out of its systems, and there are plenty of systems to play with. Although the easy difficulty will let players go through without having to get too involved with all of its elements, what’s left simply isn’t enough to be engaging thanks to the endless corridors and abysmal story pacing. There are some occasional traps and blockages, but overcoming these is simply a matter of timing movement or using the relevant Blood Maiden ability. Each tower also comes with its own “desires” that can have an impact on dungeon-crawling, sometimes providing bonuses when those desires are fulfilled, and also has its own Nightmare, a special boss that cannot be defeated until the very end of the tower and if encountered before must be run from. Getting caught necessitates a battle where players must aim to stun the Nightmare so they can flee. 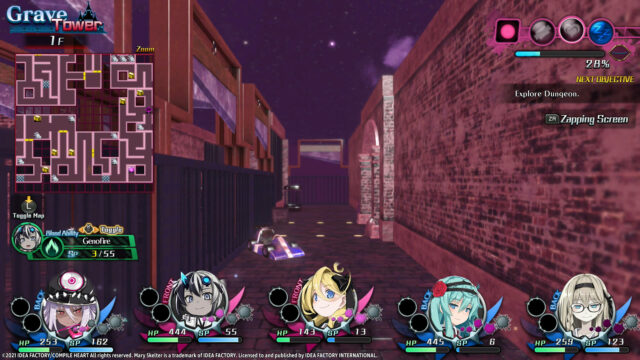 The corridors between different towers are varied, but still very much corridors.

Mary Skelter Finale features eccentric visual dungeon designs, with each tower having its own distinct template. However, the corridors swiftly become samey and there aren’t any noteworthy markers or interesting sights to break them up. Character designs are a mixed bag; there are some cool outfits and designs but just as many clearly meant to do little other than show off certain parts of the anatomy, and that’s ignoring the Blood Skelter portraits where clothes simply disappear for no apparent reason. Even worse, the fourth tower features a staggeringly ill-chosen bright scheme that is physically uncomfortable to look at for any substantial length of time on the Switch’s handheld mode, even at its lowest brightness setting. The music is at least enjoyable and fairly catchy, especially the theme song, while the voice acting is largely fine without really adding that much to proceedings given the very uneven event pacing.

Though newcomers can jump in here, Mary Skelter Finale is one for fans of the series and dense dungeon-crawlers in general. The pacing, and straight continual goal of simply advancing up whatever tower is next, means that there’s not really much to be gained from its narrative through the bulk of the game; the deep dungeon-crawling systems are really the ultimate appeal here. It will definitely satisfy some, but those passing by with simply a casual interest will find it a slog.