A Dragon Quest Draws Near

There’s a little secret about my RPG history. Growing up in the 80s and 90s with Nintendo and Sony consoles, I played various RPGs. The ones that grabbed my attention most were those of the popular Final Fantasy series. Smitten by Final Fantasy VI and Final Fantasy VII, I became a fan and eagerly anticipated the next mainline games. Unfortunately, I also entirely missed the series that blazed the turn-based JRPG trail, Dragon Quest. This year, I played my first game in the series and rectified the situation — Jason joins the party!

Now at 85 hours into Dragon Quest XI S: Echoes of an Elusive Age – Definitive Edition, I’m loving the splendid adventure. The game’s leveling and battle systems are nearly perfect, exploration is wonderous, and the character and world building are exceptional. Moreover, these key aspects are exquisitely woven together with a fine-told yarn. Having such delightful entertainment, I’m pleased the game’s richness extends for so many fulfilling hours. My time role-playing as the Luminary, nevertheless, will soon conclude and leave me open to new quests. Like my first Final Fantasy playthrough, Dragon Quest XI has charmed me with its satisfying gameplay loops. Indeed, I’m finally a fan of Dragon Quest and look forward to venturing into more entries of the series.

My forward progression is paralyzed, however, until the next mainline game is published, and Dragon Quest XII: The Flames of Fate is still in development with only the title revealed so far. To continue Dragon Quest-ing, I must backtrack to a previous game in the series, but which one? Thanks to RPGamer’s handy “Where To Start?” feature, I have the answer. As if guided by a seer, I began my journey in a title connected to the Erdrick Saga that includes Dragon Quest, Dragon Quest II, and Dragon Quest III. The good news is that all three of these classic JRPGs are playable right now via Nintendo Switch Online or on mobile. To “correctly” follow the narrative, the next title I should choose is Dragon Quest III: The Seeds of Salvation. 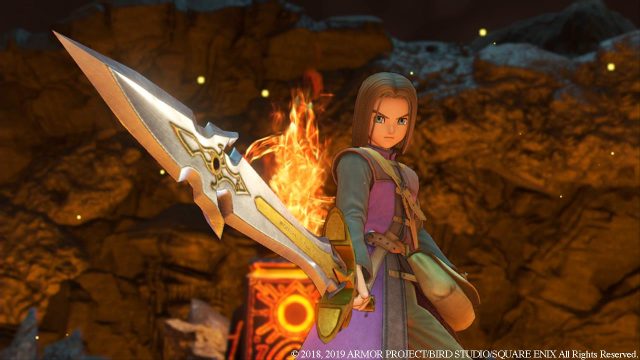 The eleventh Dragon Quest is number one for me, being my first game in the series. Now I’m committed to swordsmanship throughout the Erdrick Saga

There’s a befuddling affect with moving on this now though. My conundrum involves recent news from Square Enix, which announced a complete remake of Dragon Quest III is underway, and it’s casting Oomph on the game, using a gorgeous HD-2D graphics engine. Bedazzled by that promising spectacle, I can’t settle for the modernized port of DQIII, currently available on Nintendo Switch. Instead, I’ll play the ever challenging waiting game — requiring pep powers of patience a.k.a. long-suffering — before I can get my twitchy mitts on the hi-res remake of The Seeds of Salvation. Without a release window, the long wait could be insufferable.

Until relieved, the question then is which RPG to play after completing DQXI. Like most gamers, I have a backlog and wishlist that stretch beyond my limited playtime. Several factors affect which game is queued next, the most critical of which being time. After saturating in 100+ hours of DQXI‘s lavish balm of escapism, I’ll probably mellow into a short but sweet 20-hour adventure. The change of pace would also match my ever changing mood. Sometimes I need turn-based epic high-fantasy, but other times I may feel like playing real-time action with a sci-fi theme. By contrast, if a lengthy RPG leaves me with brain drain, I might grab a palette cleanser like an arcade-style mobile game or a platformer. Maybe I’ll visit my neglected island town in Animal Crossing: New Horizons.

Still, it’s hard to dispel the charms of a captivating quest. When Square Enix teased the twelfth mainline series entry — a delightful Dragon Quest draws near! — it mentioned that The Flames of Fate will have a more serious tone. Intrigued by those whispers, I wonder whether DQXII will be part of the Erdrick Saga, another extant story-arc, or a fresh JRPG narrative. In any case, the thought of an all-new release of Dragon Quest brings reverberations of riveting role-play. I’ll be ready to wield a two-handed game controller upon more dragons, but in the meantime I must wait, which is akin to grinding for more experience. Hopefully, Square Enix will cast Acceleratle on all of its upcoming Dragon Quest titles as many other RPGamers also anticipate the next slimy adventure.