There are lots of elements that could be interesting if given the proper care and attention, but in their current state most of them feel superficial and end up cluttering up the whole experience.

Edge of Eternity is certainly an ambitious title. The game, developed by a small studio based in France, is billed as a love letter to some of the more beloved JRPGs, promising an epic journey. While it’s clear the game comes from a place of love, the unchecked ambitions end up counting against it. In looking to try to add as many interesting elements as possible, things have gone the other way and the result is a game without much identity.

Edge of Eternity is set on the world of Heryon as its populace attempts to fight off an attack from an alien force that has introduced a disease called the Corrosion, which is ravaging Heryon’s population. The story starts off fairly promisingly, with an interesting premise and a major event right off the bat as main protagonist Daryon finds the military post he is stationed at under attack. In the moments before, Daryon learns his mother has caught the Corrosion but that his sister Selene may have found a cure for it. In the chaos following, Daryon deserts to return to his sister and begin hunting down the cure.

Though there’s more than enough in the premise to stoke initial interest, the game immediately pushes those interesting parts to the back burner to send Daryon and Selene on an uninspired journey through a set of pretty, but ultimately dull, locations. Selene fails to offer any tangible evidence of her cure and drags Daryon, who seems to simply ignore what happened to him in the opening, along to find her master, with the following events simply pushing that goal to the next location. It may be that there are satisfying pay-offs down the line, but the failure to provide players with sufficient impetus for the journey means the narrative doesn’t offer nearly enough to keep pushing through when other issues rise to the fore. 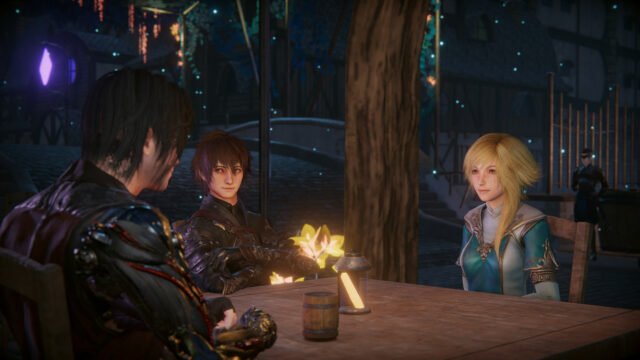 The siblings’ actual journey is strangely at odds with the initial premise.

Combat is another area that shows initial promise in the tutorials but quickly wears thin in practice. The game features an ATB turn order with hex-grid movement. On their turn, combatants can choose to move to an adjacent hexagon, attack, or use an ability or item. Attacks and abilities are limited in range, with certain spells and special attacks on both sides including cast timers that can be interrupted.

Edge of Eternity features traditional experience-based levelling and an equipment system, but gives players some control over character builds through crystals. These can be attached to a grid and grant access to any spells. New crystals are granted liberally, perhaps too much, so players will just end up with a pile of very similar ones. Crystals can be combined to create upgraded versions, but these “upgrades” are usually paltry. The greatest benefit of upgrading seems to be that it results in less crystals to sort through.

The combat initially shows some interesting promise, but encounters get incredibly repetitive very quickly with only a small number of different enemies. There are advanced tactics, such as flanking enemies, but these often take so long to set up that they usually aren’t worth it. The fact that the spells and abilities available to players are contingent on equipped crystals also severely restricts players’ options as there aren’t very many slots available. Ultimately, combat ends up being too slow, restrictive, and repetitive to be any real fun. 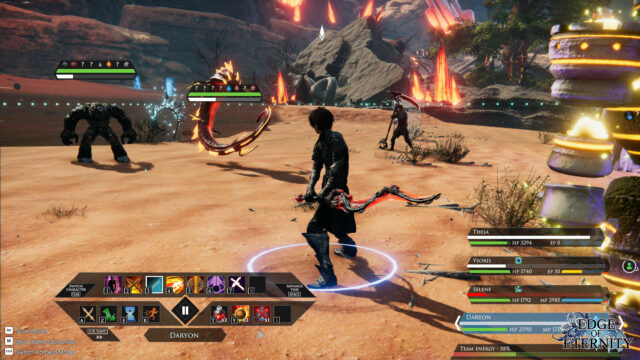 Despite an adjustable difficulty slider, combat also has some major balancing issues. Early on most encounters are trivial, but the game throws in some major difficulty spikes a few chapters in. Based on the level jumps, it feels like grinding is the preferred method to progress, but on top of the encounters being repetitive, the preceding enemies give out such meagre experience to make doing so a highly unappetising prospect. Other flaws in the combat system are drawn out by certain encounters; while players can speed up combat, battles against large numbers or waves of enemies take for too long for how little action there is.

In between combat and towns, players are thrown into large, striking open areas. These areas highlight Midgar Studio’s artistic talent, with some stunning backdrops and features, while towns have a good lived-in feel to them. Unfortunately, there’s not actually anything of interest in the areas themselves. Players can find some brief puzzles, as well as lots of underused crafting materials and combat encounters, but little else. Some sidequests are available, including a few interesting short stories, but these predominately just send players back and forth across those areas once again not doing much else of interest. Though they look nice and there’s good variety to the biomes, the lack of anything substantial within them means that they ultimately end up forgettable. 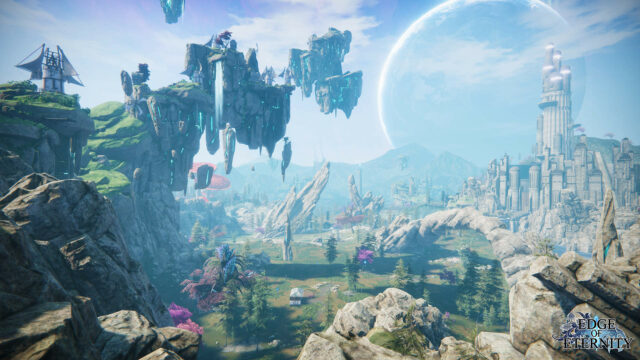 Locations look great, but there’s not very much of actual interest within them.

The great scenery is also countered by the game’s animations and character models, which are fairly clunky. Meanwhile, the camera struggles whenever the environment is involved in combat, often getting stuck or lurched away, and the maps outside of dungeons aren’t particularly helpful. Voice acting is highly variable; there are some good moments, but those are tempered by stilted deliveries elsewhere, and it’s not helped by the fact that neither Daryon and Selene are likeable characters. The music joins the environments as a bright spot, primarily composed by Cédric Menendez with contributions from Yasunori Mitsuda, and is enjoyable to listen to.

It’s obvious that the game comes from a place of love, and it is clear how much passion Midgar Studio has, but Edge of Eternity feels like a case where the developers have set their sights too far. There are lots of elements that could be interesting if given the proper care and attention, but in their current state most of them feel superficial and end up cluttering up the whole experience. There will certainly be some that can appreciate everything the small studio has managed to achieve and aim for, but as it currently stands it’s not one that can be readily recommended to most RPGamers.