The game immediately exerts charm and not only looks incredible, it appears to have a fantastic level of depth in all elements of its presentation, narrative, and gameplay.

The lack of E3 means that many developers are having to find other ways to showcase their games. In this case, Modus Games’ Executive Vice President of Production Derek Neal and Studio Head developer Dreams Uncorporated’s Carlos Rocha Silva provided RPGamer with a guided demonstration of the upcoming Cris Tales, a turn-based time-manipulation RPG billed as a love letter to JRPGs. Those influences were readily apparent during the hour-long demonstration — followed by a Q&A session — that covered more content beyond the public demo, showing off much more of the city of Saint Clarity.

Cris Tales stars Crisbell, who in the demonstration is joined by two other party members: Willhelm and Cristopher. Crisbell is a Time Mage, accompanied by her froggy mentor Matias, and her abilities allow her to see into the past, present, and future all at once — shown by dividing the screen into three sections, with the past always on the left and the future always on the right. Crisbell herself is stuck in the present, but Matias is able to leap into her visions and find out more details that may be useful to players in order to create a better future. The city of Saint Clarity is divided into the rich, golden-walled district where only nobles are allowed and the slums where people literally live with the sewage from those above, which often flushes down upon them. Saint Clarity’s story sees players becoming involved in a conflict between the nobles and the downtrodden, with Cristopher’s family a key part of it. 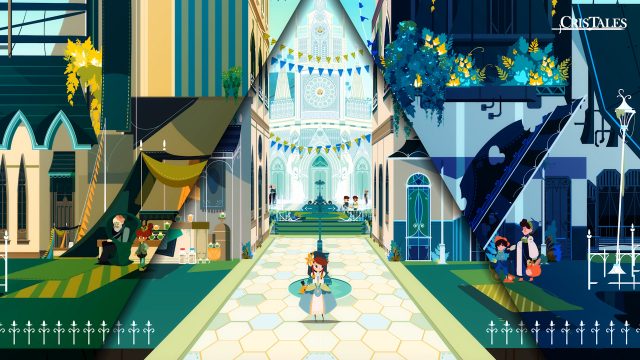 Past, present, and future.

In addition to its influences on the story, time manipulation is one of the biggest mechanics in Cris Tales’ combat. For example, Willhelm has a skill that can poison an enemy, making them take damage every turn. However, Crisbell can build upon this by then sending that enemy into the future, where they have grown old and have already taken all of that poison damage, making them significantly weaker. Meanwhile, if Crisbell sends enemies into the past, Willhelm can use a skill that embeds a poison sprout, which usually requires a large number of turns to grow before it can activate its effect. By having Crisbell then bring those enemies back into the present, she also causes the sprout to fully grow and quickly activate.

Though those particular examples of time-manipulation are positive for the player side, there are also many dangers. In a fight against some wolves, by sending these wolves into the future, players will find they have simply grown more powerful. This also works the other way: sending an old knight into the past may well put him back in his prime. In addition to learning enemy strengths and weaknesses to elements and status effects, players will also need to consider how they might react to time changes. To aid this, Willhelm has a useful scan ability, which lets him learn what forms enemies will take in the different time periods as well as other details such as their health. 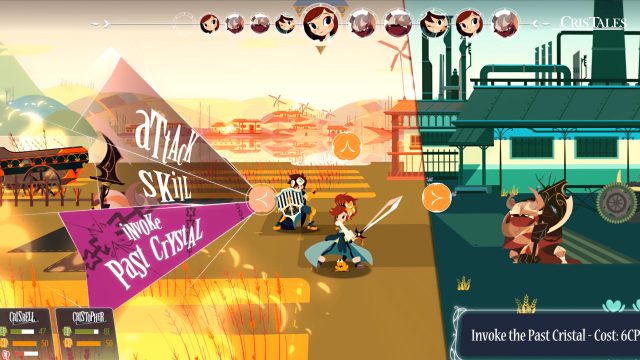 As well as being important narratively, time manipulation is a vital part of combat.

Combat also features a simple timing mechanic, where button presses timed with flashes of darkness can cause critical hits or help defend against enemy attacks. When attacking, a “good” or “critical” timing will cause follow-up attacks, while when defending players will be able to deflect or parry enemy strikes to mitigate damage received or avoid status effects. Getting these follow-up attacks is important for combat as many status effects will only activate with them, such as the burning effect from Cristopher’s fireball spell. The combat looks to have a lot to depth, and fans of more strategic combat systems should find the number of options and level of thinking it encourages — particularly in boss fights — to be a great boon.

Speaking further to its influences, Cris Tales features random battles as well as a traditional world map, plus dungeons and puzzles. Though the view is always from the same side-on angle, the game’s locations are all three-dimensional and many areas will warrant returning to in order to complete sidequests. Sidequests and player choices will have a massive effect on not just individual characters, but also on the future of the game’s world and its cities like Saint Clarity. Crisbell’s ability to see through time gives immediate feedback on the effects of player actions, such as one character initially not being around in the future but appearing once a sidequest has been completed. The total amount of end-states is massive; there is one particular house in the city which has 20-30 different designs in the future based on how everything plays out. 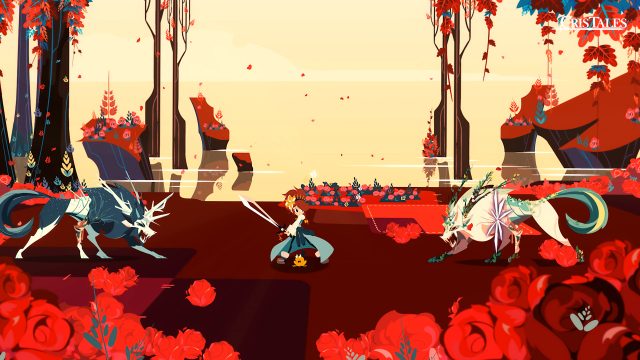 The distinctive art style is used to great effect.

It must be said that the game looks fantastic. The art style and its use of colour are striking to behold, particularly the first time players enter Saint Clarity’s walled city. Saint Clarity itself features many influences from developer Dreams Uncorporated’s home country of Colombia that are very effective in giving it character. There are also lots of nice little touches in areas like the animations, such as Matias occasionally cheering the party on in combat with pom-poms. The game is fully voiced in English and through many of the event scenes in demonstration were skipped in the interests of time, those that were heard during the demonstration were all well performed.

Cris Tales is expected to take players about twenty hours to complete, though indications are that many will exceed that mark. The Saint Clarity section was initially expected to take around two hours but the team has found that players are usually spending three to four hours on it. The game will take players across five major kingdoms, with further world-spanning content on top of that. Though each kingdom has its own tale, there will be sidequests that cover multiple kingdoms on top of the overall story. The number of potential outcomes should encourage players who enjoyed the game to replay and see how their choices can create different outcomes across the world as well as the multiple available endings.

The showings from Cris Tales prior to this demonstration were already strong, but for me this has cemented the game as one of the premier upcoming RPGs. It combines traditional elements and its own fresh ideas to great effect. The game immediately exerts charm and not only looks incredible, it appears to have a fantastic level of depth in all elements of its presentation, narrative, and gameplay. RPGamers should be on the lookout for the game when it launches on November 17, 2020, for PC, PlayStation 4, Xbox One, Nintendo Switch, and Google Stadia.