The date I downloaded the PS One Classic Final Fantasy VII, according to the PlayStation 3, was August 3, 2013. Excitement for the PlayStation 4 was brewing and I was rounding out my collection of desired PlayStation games to download to my PS3 before its use would subside massively. On that PS3 the game would sit for years until the release date for the Final Fantasy VII Remake was announced. Seeing no better excuse to start, I booted up the original Final Fantasy VII. Play began slowly, odd nights were spent here or there making my way to the next save point. But as the date for Remake got closer, I dedicated more and more time to the game, completing the game in the days leading up to the remake’s release. Needless to say, I’ve had Final Fantasy on the brain recently.

A small confession to make, despite enjoying the series quite a bit I have never completed any of the PlayStation era Final Fantasy games. Growing up with Nintendo consoles until the PlayStation 3 meant many of the classic RPGs from that era passed me by. I knew of Final Fantasy VII, excited murmurs and occasional visits to friends houses resulted in some hands on time with the game but never to any real degree. Cultural osmosis meant the game was basically spoiled inside and out and viewings of Advent Children and hundreds of hours playing had given me a vague idea of how Cloud, Sephiroth, and Tifa were as characters, but as for the true Final Fantasy VII experience I was lacking. 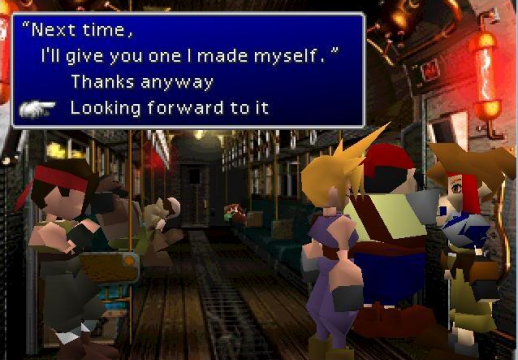 It may also not be possible to have the “true” Final Fantasy VII experience anymore. At least, not in the way where it became the cultural juggernaut that it did. I’m playing it in a gaming world it helped define. I wasn’t part of the zeitgeist and am no longer in my formative years where landmark games can make an impression on me in the way VII did for so many people. The Squaresoft that made the original no longer exists, in its place is Square Enix, a company that has painted the legacy of VII with spin-off that garnered mixed receptions and a movie that’s, for want of a better term, bad. Early reports from the remake also make it sound like significant changes are being made, but I’m avoiding those for the time being. The point being that I can’t come to Final Fantasy VII with zero expectations, one way or another.

So how did I like the game? Surprising even myself, I liked it a lot. It marks a clear turning point in the series, but also manages to blend the scope and scale of previous entries with around the same level of depth, which is impressive given the radical shift in presentation. The Materia system is fun and offers an acceptable level of customization, even if the cost is that characters do not have much to differentiate them in battle beyond their equipped Materia and their Limit Breaks. The game is large and reasonably long but never manages to feel dull because it is filled with so much stuff. Modern Final Fantasy seems to have forgotten the myriad of different gameplay modes that, while not particularly fleshed out, added some much-needed change in gameplay to break up the walk-battle-cutscene-repeat loop that could otherwise make the game’s length feel interminable. The direction even feels inspired in some ways. The famous event mid-way through is surprisingly well-built-up in the story and several of the now-dated looking CG cutscenes are rather memorable. To top it all off, the music is still fantastic and nearly all are instant earworms, harking back to an era before the series would become dominated by giant orchestras. In spite of its age and a lot of built up expectations, the game still worked and held up.

That isn’t to say that all of the game worked, and there are many aspects of the game that could be better. Some of them can be chalked up to the modern amenities games today offer that are legitimate time savers. VII is riddled with overly-long animations, cutscenes that cannot be skipped, noticeable PS1 load times, and random battles. That last one may be more of a personal thing, but I’m far past the days of enjoying being interrupted every few steps to fight the same two or three battles over and over again. Did you know that you can’t cycle to the top or bottom of a menu from the opposite end? It was a mistake I kept making throughout the entire game and one that still irks me. Switching Materia between characters is also a hassle, especially with someone who wasn’t in the active party. The mere fact you can’t switch between party members at anytime is also irritating and made me stick with three characters to the detriment of everyone else. 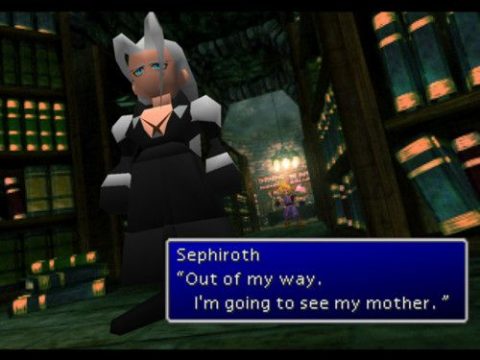 These are issues that would be resolved if the game were made today, we’ve come a long way in streamlining user interfaces. I do wonder if the same could be said about the game’s story. The original’s translation is very poor — an argument could be made that its wacky localization is part of the game’s charm — but the story itself is uneven throughout. The aspects dealing with Cloud’s identity crisis is some of the most interesting stuff in the game. The running theme of identity, how character’s pasts and environments inform who they are, is far more interesting than the primary plot concerning the magical lifeforce of the planet being used to power an industrial megalopolis. It’s not exactly a subtle allegory but it at least has its heart in the right place. However, the translation hurts it, as I found the plot hard to follow, even knowing the broad strokes. I could probably give an adequate summary of the events but the connective tissue leaves a lot to be desired. The game can sometimes offer poor direction as to where to go next, especially during the second act of the game when the overworld comes into play. This gives the world an impression of being larger than it really is, but if I didn’t have a guide open next to me I would have spent many hours lost.

Even with all of my complaints — and I think I’ve spent more time speaking about the negative aspects of the game — I quite enjoyed my time with Final Fantasy VII. It’s not my favorite Final Fantasy game and I don’t see myself ever revisiting it, but it has made me more curious about the other PlayStation titles in the series. At the very least, it will be interesting to see the changes made in the remake that I will be more aware of.  It’s also a large entry off of my backlog, where it has sat for the better part of a decade. It was a unique adventure, visiting a world familiar to so many with the benefit of hindsight, experiencing the game that would help to define a generation and a genre, and getting to personally mark a major turning point for one of my favorite series. I’m more intrigued than ever to see what the remake brings, even if I’m still more interested in seeing what Final Fantasy XVI will bring when it finally gets announced.