Square Enix opened its E3 presentation with a new extended trailer for the upcoming Final Fantasy VII Remake. The trailer shows the remake’s new hybrid real-time and command-based combat system as well as the previously revealed versions of Cloud, Aerith, and Barret, and includes the debut appearanace of the remake’s Tifa.

Final Fantasy VII Remake will be split into a number of releases. The first will be set in the city of Midgar with Square Enix stating that it will provide a full standalone experience. This first release will be available for PlayStation 4 on March 3, 2020, with Square Enix also announcing a number of editions for the game. The $79.99 Deluxe Edition will include a hardcover art book, a mini-soundtrack CD, a Cactuar summon materia DLC, and a Septhiroth-design SteelBook case. Meanwhile, the Digital Delxue Edition will include a digital art book, a mini-soundtrack download, and Carbuncle and Cactuar summon materia DLC. Finally a $329.99 1st Class Edition, available exclusively form Square Enix’s Online Store, will include all of the Deluxe Edition’s content plus the Carbuncle summon materia DLC and a Play Arts Kai Cloud Strife and Hardy Daytona figure box set. 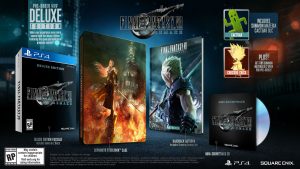 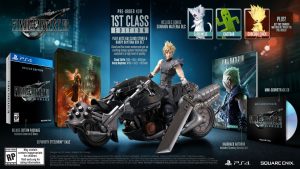 Following the presentation, Square Enix also announced the key members of the voice cast for the remake: