Prepare to leave all your worries and cares behind, Comrade. Here in Alpha Complex, everyone is happy. In fact, happiness is mandatory. No need to question your work assignment; Friend Computer knows best, and will always make the right choice. Just do what you’re told, be clean, take your happiness pills, and remember to stay within your clearly-marked walking area on the floors, color-coordinated with your uniform to show your security clearance level. If you do step over the boundary, or commit any other treasonous action, just confess to Friend Computer; he will know whether you should self-terminate or not. Remember that Friend Computer knows what’s best; everything else is just paranoia.

Paranoia: Happiness Is Mandatory is based on the tabletop RPG known simply as Paranoia first published, ironically, in 1984, and perhaps it’s no mere coincidence that it has all the Orwellian themes of dystopian subservience and authoritative control of the novel published half a century earlier. There’s propaganda everywhere, lining Alpha Complex’s hallways, and nonsensical rules that would only make sense to a badly-damaged computer AI are enforced with absolute impunity. We don’t quite know what has happened in the outside world — perhaps a nuclear apocalypse, an alien takeover, or, just maybe, nothing at all — but within Alpha Complex, questions aren’t asked, and answers aren’t provided for the player; the expectation is that you’re a good little drone and will simply follow the way of things. 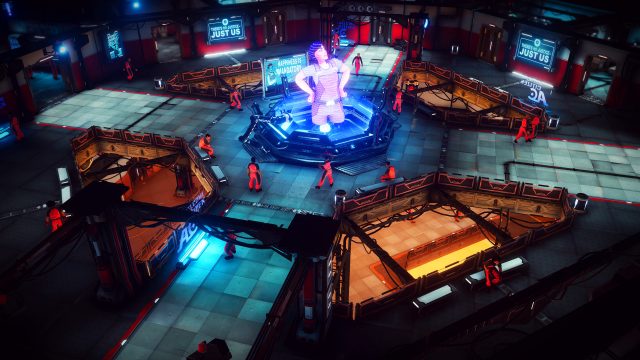 The game follows the tabletop’s premise that the player has been recruited to serve as a Troubleshooter, Friend Computer’s personal task force that carries out its skewed orders and enforces its illogical laws. The game is a squad-based tactical RPG, and the members of the Troubleshooters fill particular RPG party roles. During the demo, after seeing the Troubleshooters become inducted in Friend Computer’s main control room, I got to watch them go about their first task, which took them into the complex’s basement, where a sanitation bot sent to clean has not reported back from duty.

Arriving in the basement and locating the sanitation robot, the Troubleshooters are quickly ambushed by a group of LARPers, who’ve taken the basement rooms as their play space due to their lack of camera surveillance, allowing them to avoid the purview of Friend Computer. Such treasonous, unsanctioned fun cannot stand, and the LARPers know full well that you would sooner end their existence than let their trespass go unpunished. Thus, a life-or-death battle ensues. Honestly, I didn’t get a good enough sense of the particulars of combat to know what, if anything, sets Paranoia‘s battle system apart from other tactical RPGs, as the demo was, unfortunately, not hands-on. Combat plays out in real-time, with the ability to pause and issue commands to the Troubleshooters. Should one of your troops fall in the line of duty, worry not; a clone is ready to replace him upon death, though the supply isn’t limitless and eventually the game can end prematurely if the clones run out. In the meantime, however, this can have the benefit of being able to respec a character if they simply weren’t working out. Such is the ruthless efficiency of Friend Computer. 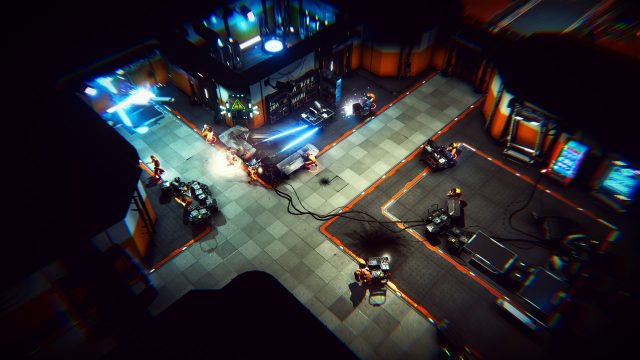 The juxtaposition of the game’s cartoonish graphics and silly premise with its chaotic undertones created such a fascinating, darkly humorous atmosphere that it already pulled me in. I respect the game’s devotion to its source material to the degree that it refuses to provide a full backstory — Friend Computer wouldn’t let his subjects get filled in on unnecessary information, so why should you be? While the player is initially a Troubleshooter, choices made during gameplay can eventually lead to the characters discovering for themselves the farce of a society they live in, or so I was led to believe. PC, PlayStation 4, and Xbox One owners will have to wait until the vague October/November launch window to find out what is and isn’t real.