Famitsu has published a lengthy preview for Fire Emblem: Three Houses, providing lots of details about the upcoming tactical RPG along with almost a hundred screenshots and pieces of artwork for the game. The preview features some reminders of the details revealed in February, while also adding new details about the game’s story, combat, class system, and difficulty options.

Fire Emblem: Three Houses take place on the continent of Fódlan, which is home to three main powers: the Adrestian Empire, the Kingdom of Faerghus, and the Leicester Alliance. At the centre of the continent, sitting in between these three powers, is the Garreg Mach Monastery, the home of the Church of Seiros and the Knights of Seiros, which aim to maintain order in Fódlan. The Monastery hosts the Officer’s Academy that helps to train future leaders from all three nations and is split into three houses, each representing one of the continent’s powers: the Black Eagles for the Adrestian Empire, the Blue Lions for the Kingdom of Faerghus, and the Golden Deer for the Leicester Alliance. 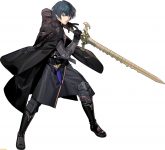 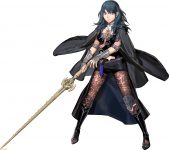 Players control a customisable character, who is named Byleth by default and can be male or female, who starts the game as a member of the mercenary army led by their father Jeralt. After having a reccuring dream where a mysterious girl appears in the aftermath of a brutal battle, the player character comes across some youths accosted by a bandit. The protagonist jumps in front of the bandit’s dagger to protect them, but time stops and the mysterious girl, Sothis, suddenly appears to them. Sothis tells the player they will lend them her power to rewind time, letting them defeat the bandit. Following this, the player learns the youths are students at the Officer’s Academy, and the protagonist is invited to become an instructor there after their skill in defeating the bandit is recognised.

When players get to the academy they are given the choice of which of the three houses to lead. The Black Eagles from the Adrestian Empire are generally more proficient at fighting with magic than weapons. They are led by Edelgard von Hraesvelgr, who is next in line to the throne and has a dignified demeanour. The Blue Lions from the Kingdom of Faerghus includes many who specialise in using spears following the nation’s high number of knights. They are led by Dimitri Alexandre Bladud, who is also in line to take the throne in his nation and is often polite and chivalrous. Finally, the Golden Deer of the Leicester Alliance are most skilled with using bows and arrows and have a higher percentage of students from a common background than the other two houses. Claude von Regan leads them and puts on a friendly act.

Fire Emblem: Three Houses is split between battle scenarios and sections where players interact with and train students back at the Academy. The basic battle system is mostly identical to those in the previous entries in the series, as players control each unit one at a time during their turn before the enemy moves their units in the next turn. However, while previous games has featured one-on-one encounters between units, Three Houses sees those units accompanied by other “regular” soldiers. More details about features associated with that aspect are expected to be revealed at a later date.

Terrain effects will be present in Three Houses. For example, forests increase evasion rate against enemy attacks. Meanwhile, shrines will restore HP to characters and some maps will feature teleportation circles. A time-rewind feature is also present, and can be used a limited number of times to go back one move and choose a different command. The game will also let players save and load during combat.

Normal and Hard difficulty setting have been confirmed, alongside the return of the Classic and Casual modes. Classic modes mean that units will die in combat if they hit 0 HP and are lost permanently, while Casual mode will simply see them removed from the battle and return the roster for future battles.

Outside of combat, players will be able to wander around the Academy with a new third-person view as opposed to the usual top-down camera for the series. Growing bonds with students is an important part of the game, and as their instructor players will need to offer advice and assist in training them. Exact benefits of growing bonds are yet to be revealed, but training them will help raise their profiecncies in various weapons, which will in turn let them access more advanced classes and unlock skills.

Fire Emblem: Three Houses features some signifcant changes to the series’ class system. When characters change class they now no longer return to level 1 and do not lose any weapon proficiency. Changing class in Three Houses requires passing a qualification exam by using an Exam Pass for that class’ rank. The chances of passing the exam are based on the character’s weapon proficiencies. The protagonist and all of the students will start out in either the Commoner or Noble class. Once they reach level 5, they will then be able to access the first rank of classes that includes Myrmidon, Soldier, Fighter, and Monk.

Fire Emblem: Three Houses is being developed by longtime series developer Intelligent Systems with assistance from Koei Tecmo and is set to be released worldwide for Nintendo Switch on July 26, 2019. The game will be available in standard physical and digital editions as well as in a limited Seasons of Warfare Edition.