ToeJam & Earl: Back in the Groove Review

Pump Up the Jams

ToeJam & Earl: Back in the Groove is a serious game for serious gamers. Not! Nevertheless, it provokes deep questions like, “Where’s the line between a remake and a new gaming experience?”, “How much does a fan favorite from 1991 need to change to appeal to a modern audience?”, and “ToeJam, did you drink my root beer?” Thanks to the magic of Kickstarter, HumaNature Studios has rebuilt the Sega Genesis title ToeJam & Earl with futuristic retro graphics, a jammin’ new soundtrack, and tight controls. Although much of the experience is a familiar present-grabbin’, Earthling-avoiding romp, it also benefits from modern amenities like online co-op, a save system, unlockable characters, and collectible hats. Although it was built from the ground up, Back in the Groove feels like a familiar classic enhanced by extra features. It’s great to see Big Earl and the gang in their new threads, but the familiarity of their journey quickly becomes repetitive. The funky atmosphere, spoofs, and goofs are fun for a brief jaunt with friends, but don’t anticipate sinking too many hours into this one. Back in the Groove can be completed in a single evening; subsequent playthroughs extend the experience, but feel like a pancake-eating contest where the prize is more pancakes.

Back in the Groove‘s story isn’t deep, but it sets up the silly character interactions that drive much of the game’s humor. Once again, alien rappers ToeJam and Earl crash land on Earth. Unlike previous entries in the series, they’ve also brought their friends Latisha and Lewanda. To return home, they must travel the planet’s floating sky islands and locate the missing pieces of their Rapmaster Rocketship. Each level is populated by dangerous Earthlings like grawlix-chucking Internet trolls and ice cream trucks that only serve rotten cabbage. Avoiding these pesky Earthlings requires a little stealth, help from friendly Earthlings like a mercenary opera Valkyrie, and a pile of helpful presents. Presents, which are unlabeled until identified, provide temporary power-ups like a destructive tomato rain, uncontrollable rocket skates, and a boombox that forces enemies to bust a move. 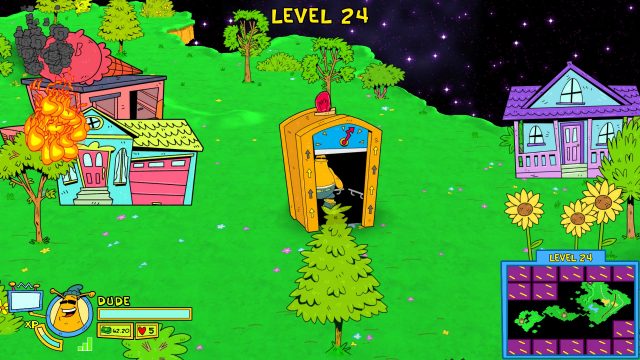 Some Earls just like to watch the world burn.

Back in the Groove‘s action roguelike pedigree is solid. Present contents, level-up stats, and (on higher difficulty levels) map layouts are random. Each of the nine unlockable characters has a unique special ability, such as Earl’s willingness to eat spoiled food and ToeJam’s more efficient use of speed-boosting presents. Avoiding death isn’t difficult in the early levels, but frequent extra lives help manage fast-moving mobs of Earthlings in Earth’s upper altitudes. Two mini-games mix up the routine with a dash of rhythm-matching and a reflex-based trip to the Hyper Funk Zone. Although each level has a lot of moving parts, the core strategies of avoiding Earthlings, collecting presents, and exploring are the same at the start and the end. In a more difficult game, simple goals would be enough: the challenge would be in executing them. Here, the gentle challenge limits the number of adrenaline moments or meaningful strategic decisions, encouraging relaxation and hanging out.

The high point of hanging out with Funkotronians like TJ&E is their extraterrestrial style. The slap-bass-heavy soundtrack is playful and funky, especially the vocal theme “Back in the Groove”. The sound effects and voices are likewise strong, although some Earthlings, like the naked man in the box, are annoyingly shrill. The bright, cartoony graphics evoke 1990s Nickelodeon by way of the Memphis Group. Characters are rubber-faced and bouncy, comfortable in their caricature existence. The hungry mailbox and wise man wearing a giant carrot would prosper in any setting, but are especially at home in this vibrant cardboard standup Earth.

Although solo play is a viable option, ToeJam, Earl, et al. work better as a team. Setting up a four-player online match is easy, and there are many ways to interact with friends. Players can high-five to share health, distract Earthlings from one another, and share present effects with nearby allies. Most of the time sharing presents is an effective way to double a present’s effects, but opening a Total Bummer or an alarm klaxon around sleeping enemies is also part of the experience. These are the situations where out-of-game voice chat shines, allowing good buds a chance to share the comedy of a botched plan. 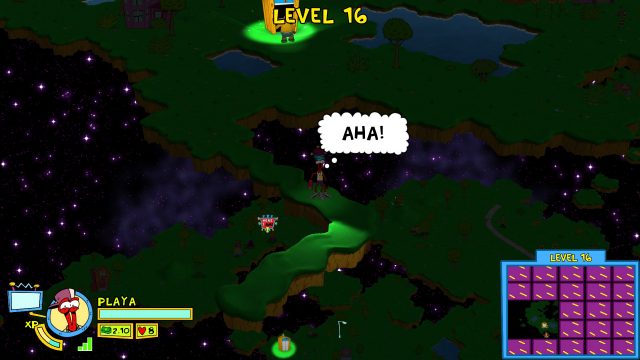 Where did Earl get off to?

As much fun as online play is, joining public games is a challenge. New players always start on Earth’s lowest level with zero XP, so they aren’t able to contribute as much to an ongoing game. Since in-game communication is limited to a ring of stock phrases like “Let’s split up”, and “Yo”, more complicated plans are difficult to implement.

$20 can buy many goods and services. It could purchase a copy of ToeJam & Earl: Back in the Groove or a large pizza pie with fixings. Both purchases have their advantages, but only one will appreciate in time. Since launch, the HumaNature team has squashed several bugs and made valuable quality-of-life-updates to Back in the Groove. The value is clear to nostalgic fans, who have probably already purchased the game and had fun with it. However, newcomers to Funkotron are more likely to enjoy it for a few hours and move on in search of more variety, a bouncy bass beat in their hearts.