Into the Past, Into the Stars

During the golden era that brought waves of glorious Super Nintendo RPGs to the west, a small magazine clip introduced a new series to me that was out of this world. After a Nintendo Power article highlighted the original 1996 Star Ocean, showing off its impressive sprites and unique Sci-fi setting, my interest was piqued immediately. Unfortunately, the original game never made it west, and when the remake arrived on the PlayStation Portable, other games occupied my interest. Thankfully, Star Ocean: First Departure R came along at the perfect time and after playing through it, I can safely say the game was worth the two-decade wait.

Star Ocean: First Departure R is the PlayStation Portable game in high definition, with other improvements. The new character portraits done by Katsumi Enami improve upon the original PlayStation Portable art, with players able to switch between either artwork, though the cutscenes are stuck with the old design regardless of which style is picked. There is an upgrade to movement speed on the world map, which is tremendous since travelling with the original snail-paced speed is torturous, especially given the lack of a fast-travel option. New characters and endings have also been added. Being able to choose between the English, Japanese PlayStation Portable, or the original Super Famicom Japanese voice actors is also a nice touch.

Star Ocean has a fantastic story and sets players up for a wonderful ride right out of the gate. Unlike most RPGs, where the hero starts off on an early fetch quest, Star Ocean throws a curveball. There is an epidemic that is turning people to stone, and it’s up to the game’s protagonist, Roddick, to climb a mountain and find an herb that is said to be able to cure this disease. Except upon reaching the top of the mountain, Roddick is greeted by two humans from space that warp down to his planet in a beam of light not unlike the kind seen in a Star Trek episode. These otherworldly beings tell the young hero and his friend Millie that there is no cure for this disease and that the Space Federation is quarantining the entire planet and the only option is to abandon their home world. 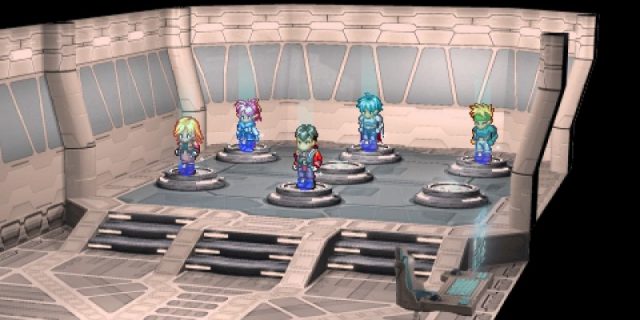 Beam me up Kenny!

From there the story opens and more characters are introduced. Three other characters join Roddick in his adventure automatically, and with only eight total spots on the roster and nine additional characters that can be recruited, it’s going to take more than one playthrough to see all the characters’ stories. The four additional characters that join offer little to the main story, whereas Roddick will routinely talk with Millie, Ronyx, and Ilia in additional story scenes. While not all the side characters get a detailed story, the ones present are decent. There is also a lack of a true arch nemesis in Star Ocean, though the game presents a well-placed faux ending before revealing the culminating area and giving a small introduction to the final villain.

The Private Action option allows the party to wander the town and, if certain conditions are met, skits will occur with Roddick and certain characters. Most of the time a character’s backstory will get fleshed out, but items, or skill books can be acquired as well. Depending on the Private Actions taken, among other factors, players can expect to see small changes to the ending scenes. There is a point system with each character, and Private Actions can raise or lower this hidden attribute, which has a lasting effect.

The action combat system breaks characters into two groups: physical fighters and mages. Players directly control one character, while orders determine how the AI-controlled characters act in battles. Usually the AI rushes into the thick of battles, often getting pincered and beat down if the enemies are decently leveled. The mages hardly move, and cast spells at a slow rate. Millie, the default healer of the game has offensive spells, but never used them in battles, though she did a fine job of keeping her allies healed. A big annoyance in battles is getting struck by a status ailment such as Paralysis or Petrify. A healer can cure the player character of these statuses, but if they are not available, the player needs to switch to a free party member and use an item to remedy the affliction. 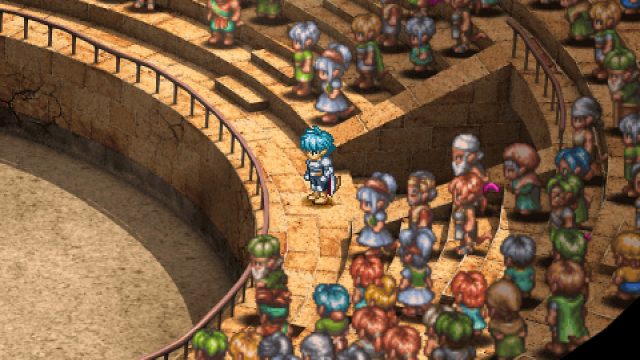 Roddick is enjoying the scenes in the Arena.

Some characters share the same battle techs and spells, and the melee fighters can only have two techs equipped at a time. Experimenting with the techs can result in the birth of new, advanced techs that add elemental damage or additional hits, but the best moves are those that can chain and stun the enemies while pushing them out of counterattack reach. Mages can slow down fights as well because each advanced spell stops the fight for a massive area effect attack. Spells can be toggled on or off, though some of the strongest can take thirty seconds to perform. It is up to the player to determine which spell animations they want to sit through, or just switch to an entire melee party so the battle flow is not interrupted.

There are some unexpected difficulty spikes that can lead the unprepared to a quick game over screen, while certain bosses that have unblockable magic spells that are hard to interrupt. Sometimes the targeting system can start a chase as enemies moving in fights can cause the player to wander around the battlefield before finding their target. Trapping enemies is the ideal way to win most battles without suffering too much damage. There are no visible enemies on the map, yet the game provides a good amount of random encounters moving from location to location. Skills can help alleviate the high encounter rate, but the game fails to make it clear how the process works and can lead players to accidentally increasing the rate instead.

The skill system is quite involved. Skills are purchased from vendors across the world, though some can be obtained through Private Actions or as quest rewards. Once acquired, these skill are assigned and improved using skill points earned from leveling up. These skills can enhance the characters’ stats or add new options such as creating items, alchemy, smithing, or composing songs that can add bonuses to battles. The higher a skill has been leveled, the easier it is to create or successfully perform the advanced ability. The game does not give much explanation or tips to use these skills, so it is up to the player to mix and match skills to see what can be created. It is a shame the remake did not incorporate a New Game Plus mode, meaning there is no way to transfer skill points or character levels to new playthroughs. 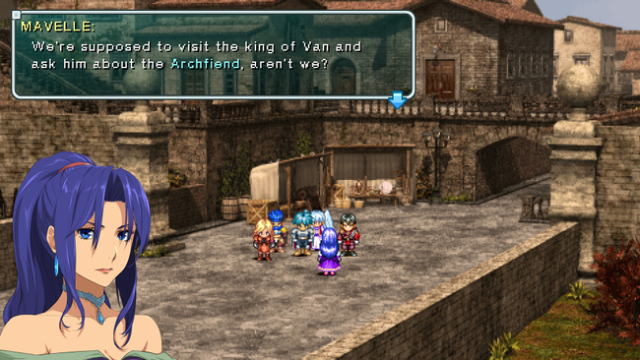 Private Actions add to the character development throughout the game.

The music composed by Motoi Sakuraba works perfectly with the game’s delivery. From the frantic tones that play during fights, to upbeat melodies while navigating towns, and even the introductory theme that instills a sense of explorative wonder to the imagination, each note serves its purpose while not interrupting key moments. While the voice acting was solid throughout the regular game, some spells are called out in a deadpan manner. Ronyx in particular has a very monotone delivery with each spell cast. Battle recordings aside, the actors flesh out the characters while delivering believable performances.

Barring the spikes that may take some initially unaware, Star Ocean: First Departure R is not too challenging, and beating the game should take less than thirty hours. There are a few additional dungeons that open up near the very end of the game, which house the best equipment, and offer tougher fights than the final boss. While parts can be challenging, it is a simple yet enjoyable romp to remind people of where the series came from.

I am a firm believer that if Enix had released Star Ocean overseas, more people would have it among their favorite RPGs from the golden era of the genre. Much like Seiken Densetsu 3, it came out at the end of the Super Nintendo’s life cycle, and the companies backing them were moving onto the newer technology. The story was ahead of its time, the main characters and interactions are top notch, and there are bountiful customization and item creation options hidden within the skill system for players to tinker with. The port handles all the details perfectly, and delivers an upgraded battle system that fans of the second title should be familiar with. Star Ocean: First Departure R is a quality game that any fan of RPGs should add to their library. The series might have faded, but its origins still shine brightly, even in today’s age.