What else can the 3DS look forward to now that Persona Q2: New Cinema Labyrinth has been released? Not very much, but at least the system’s last major release is definitely worth playing. It’s of greatest interest to Etrian Odyssey aficionados looking for more intriguing dungeon layouts and worthwhile cartographic opportunities, but the blend of cast members from the popular Persona titles offers its own enjoyable time. I certainly found the eighty hours traversing pretty much everything if offers to be time well spent.

The Persona 5 crew is off on a Phantom Thieves mission when things go a little awry. Instead of the planned destination, they wind up in an unfamiliar urban locale by the name of Kamoshidaman. Seeking a refuge from this Shadow-filled metropolis, the Phantom Thieves exit into a movie theater mysteriously playing a film featuring the place from which they just emerged. The group attempts to take stock but doesn’t get very far before noticing Haru and Ann aren’t with them, and are presumably still in the Kamoshidaman cinematic experience. Escaping the entrapment of this theater’s environment proves a task that will require venturing into other films, and in doing so a variety of additional characters appear who originated in other Persona titles.

New Cinema Labyrinth‘s overall narrative is an exploration of how individuality and conformity clash. This philosophical clash is not presented subtly, but it is at least conveyed in interesting ways through the stories of the films. Fascinating places are depicted in these films, though they aren’t given a level of depth to equal their potential. Developments in the later portion of the narrative are also rather interesting, once the rationale for the theater’s existence is revealed. 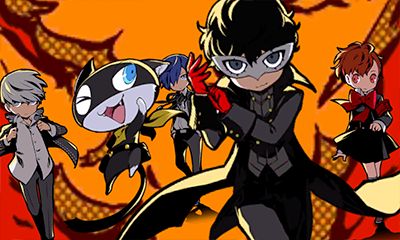 If a Persona movie doesn’t have the cast members making poses exactly like this, it will be a complete failure, no question!

More effective than the overall narrative are its interactions between the casts of Persona 3, 4 and 5. Once everyone is assembled quite a massive cast is on hand, and plenty of special screenings within the films to let the characters bounce off each other are present. Seeing Makoto hit it off with Mitsuru, or watching Chie participate in a popcorn-eating competition with Akechi aren’t particularly deep character explorations but are nevertheless highly entertaining. Atlus USA has contributed another engaging and lively localization to hold player interest, helping bring the frequent lighthearted interactions across well.

Just like the first Persona Q, dungeon navigation takes place in a first-person format strikingly similar to Etrian Odyssey titles. Dungeons are gradually filled in by traversing their terrain, and are filled with points of interest that can be noted using the map on the touch screen. A useful feature that appears several times in Q2 is the discussion by the cast of something new in the dungeon, followed by the introduction of an icon to make mapping it easier. Also akin to similar titles is the presence of FOEs, imposing creatures visible on the map that are better avoided than confronted.

Combat itself uses mechanics from Persona more than Etrian Odyssey, particularly in the form of elemental affinities. Hitting the weakness of a non-boss opponent will knock it down for the rest of the turn, and if all opponents are knocked down the battle crew has the opportunity to launch a free attack against the prone opposition. Successfully taking the baddies down via this method nets additional experience as a reward, but any survivors immediately recover and have a chance to counter. Adversaries hitting party members with a weakness will also knock down that person down for a turn, leading to random opponents having the potential to be quite dangerous. The ability to switch between multiple difficulties at any time helps alleviate any frustration, for at the lowest level the party can be completely revived in the middle of a fight at no cost. 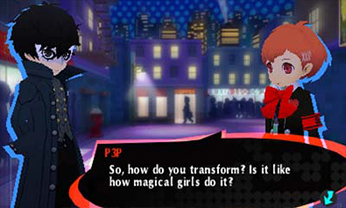 Elaborate transformation sequences in the vein of Sailor Moon are not included, to the possible sadness of some.

Each character has a Persona that learns set skills through gaining levels, but can also add a sub-Persona to supplement and reinforce these abilities. Sub-Personas depend upon the Persona 5 main character’s level to be created through fusion and can be given to any character. Sizable quantities of additional tactics become possible through this feature, from compensating for elemental weaknesses to snaring extremely useful combat techniques. Plentiful equipment that enables new techniques or adjusts statistics can also be found, making the approach to a battle far more than simply trying to power level.

Keeping alternatives to the current setup of both equipment and Personas on characters will likely run up against inventory size constrictions. While the initially low Persona limit can be increased as the game progresses, the total number of items allowed will remain at sixty. Since a fight with random enemies can result in the player receiving seven or eight items as a reward, the inventory fills quickly. Considering that materials harvested from enemy remains are key to making new equipment, this is somewhat limiting.

Going straight through Persona Q2 without engaging in any side content will leave some of the sizable cast without much time in the spotlight, which is something that the special screening bonus missions address. These stories involve going back to dungeons that were already explored, but under altered circumstances that affect which areas are accessible. In addition to seeing character interactions that shine a light upon cast members who don’t get much time in the overall narrative, the rewards from these episodes often amount to more than simply extra cash and experience. Participation in special screenings allows characters to learn combination attacks, obtain new fusions for Personas, and enable advantageous battle mechanics. The special screenings also afford the opportunity to see silliness such as Koromaru, Teddie and Morgana trying to determine which is the best mascot of the team. 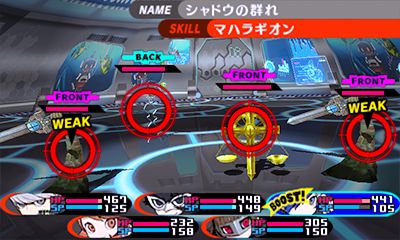 Some of these enemies may have an elemental weakness. Maybe.

Special screenings are also the only time characters not in active use get experience, which becomes a bit unfortunate once the time required to keep everyone on the same skill level becomes prohibitive. Trying out all the character combinations is somewhat discouraged because of this. While there are no penalties for keeping certain characters off the active team, the lack of a process for them to gain a certain percentage of experience is a missed opportunity.

Persona Q2‘s art style is similar to the first Persona Q, featuring moderately chibi-fied character designs that make the cast cuter than usual. This look may not be realistic, but manages to be enticing in its own way, and the stereotypical action movie poses of the cast when victorious after attacking prone enemies never stop being agreeable. Dungeons are distinct and fascinating to explore, even if none of the visuals push the 3DS’s hardware capabilities very hard.

Atsushi Kitajoh’s score is consistently welcome to the ears as the game progresses, sporting a wide variety of themes in multiple genres that nevertheless fit the surroundings quite well. Battle music alone has several tracks for normal encounters and others for distinct types of bosses, plus the dungeon themes are often altered a bit during special screenings to keep repetition down. The Japanese vocals in battle are energetic and fitting, though some of the sequences outside combat demonstrate that not every member of the cast is producing the same level of effort.

Changes have certainly been made since the first Persona Q, but this is not a drastic enough departure to interest anyone who was completely turned off by the first. Q2‘s narrative is a bit more involved than its predecessor’s, but not to the point where it can convince someone who despises Etrian Odyssey‘s mechanics. I found it wholly involving and unreservedly worth the eighty hours required to finish all content available before completion, as well as deeming it a worthy sendoff to the 3DS. This may not be the finest game on the system, but Nintendo’s handheld continues to host worthy RPGs through the end of its lifespan.