Don’t Give Up, Skeleton!

It’s not that common to see a turn-based RPG with only one controllable character. Osteoblasts, created by solo developer Anglerman and published by Virgo Versus the Zodiac creator Moonana, is a dungeon-crawler that sets itself apart even more by putting players in the shoes of a skeleton who has to battle hordes of dogs, ghosts, and meditating elephants. But for what purpose? The protagonist doesn’t really know, and the journey doesn’t provide many answers to the player either, possibly leaving the player scratching their head in confusion. The game starts with a bang, though: the skeleton is brought back to life by a feline wizard aptly named Witch Cat, and after selecting one among six classes, is approached by an ill-intentioned dog. Following the brief tutorial fight, the bony avatar is then asked to dive into the nearby caves to teach a lesson to the remaining canines who are waging war against catkind by stealing their tomatoes. While sporting a quirky and simple start, the game’s story then takes some deviations that, though interesting in concept, may be too hazy in their execution.

Osteoblasts‘ gameplay, on the other hand, employs mechanics that keep it from getting stale, at least for a while. Actions spend marrow, the resource dictating what players can and can’t do in battle, with different abilities requiring different amounts of marrow points, which can be recovered by skipping a turn or using certain skills. While every class starts with basic actions, more can be unlocked by equipping gear like weapons, tools, and charms gathered along the way. Each piece of equipment comes with one or more skills, including melee attacks and spells, but a stat threshold must be met in order to use them, something that must be taken into consideration during battles as well: buffs and debuffs can be used by the skeleton to meet such stat requirements if they can’t do it naturally, and enemies can put a spoke in players’ wheels by applying debuffs that may lower a given statistic enough to deny the use of a skill. 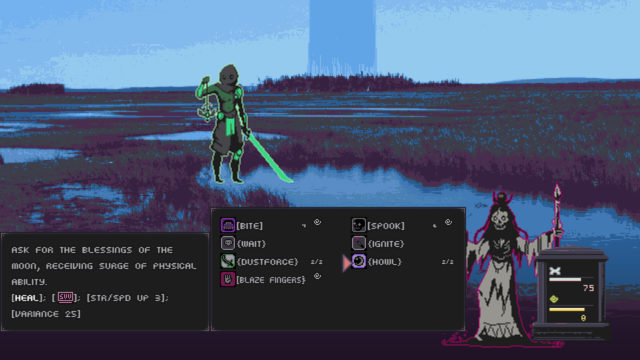 Multiple components of the battle system have to be kept in mind in order to survive even random enemy encounters.

Loot in the game is randomized, and every piece of equipment has a suffix to its name that slightly alters the stat boosts it grants. Furthermore, passive skills that grant useful bonuses like improving the skeleton’s defense or accuracy and more interesting ones like being able to act twice per turn at the cost of all stats can be equipped as well. On top of all this, there’s an elemental system in place, where enemies can be resistant or weak against spells belonging to four different elements: rain, dust, smoke, and noise. There’s quite a bit to keep track of, so it can’t be said that the battle system lacks depth.

There’s no shortage of character customization options either, and while they are greatly appreciated, especially seeing how the player avatar is the only controllable unit in battle, the excitement tends to taper off around the mid-point of the game. That’s when players can expect to have their loadout and strategy figured out for the most part, likely sticking with it if they find it effective and comfortable. Because of that, it’s also when new loot stops feeling like straight upgrades and turns more into sidegrades, something to tap into mainly for experimentation rather than being an improvement over the old equipment.

The randomized nature of loot works wonders in the early stages of the game, letting players have a glimpse of the various skills at their disposal, but as the game goes on, opening chests and buying new equipment becomes less and less exciting, since their contents will likely just have a slightly different loadout of already-seen skills and stat distribution. The way in which the stat system works also exacerbates this in a way: most of the skeleton’s attributes affect both damage dealt and received, with strength being involved with physical attacks, soul regulating damaging magic attacks, and spite dealing with curses that deal damage over time. Having a good amount of points in each statistic is always helpful, so the differences in bonuses given by different weapons become more negligible, but on the bright side, this also means that there’s no real way to be stat-screwed since no point assigned after a level up is truly wasted.

When not battling, time is spent exploring Osteoblasts‘ dungeons and areas, which manage to hit the sweet spot length-wise, being quite the breezy affair. The adventure is structured in a fashion that is reminiscent of Metroidvania games: players will frequently encounter roadblocks, requiring a bit of progress and slaying a boss elsewhere. Backtracking to areas that were previously locked-off is not painful at all, since the game’s world features shortcuts between areas that are usually separated by a door that can only be unlocked from one side. Figuring out where to go next is not an issue either: item descriptions contain useful information in that regard, and inspecting a roadblock reveals an icon of the key needed to get past it. 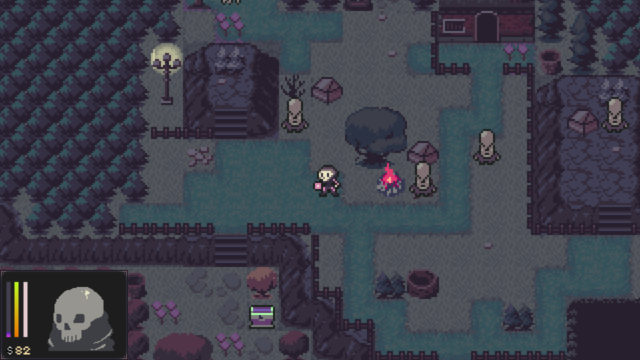 The skeleton will meet small settlements along its journey, each with its own bizarre residents.

The increasingly-interconnected areas are also worth exploring not only for new loot contained in treasure chests but also for a slew of other benefits. Statues of old gods can be found scattered in the world, and each of them granting permanent stat bonuses and different services, such as the chance to purchase passive abilities, exchange remains collected after battles for equipable spellbooks, or set a checkpoint that acts as a respawn point should the skeleton lose a battle. Old skeletal remains can be inspected to literally add bones to the protagonist and improve their health points. Some characters can also nudge players toward sidequests which can be hit-and-miss in quality. While more engaging ones see the skeleton trying to find and convince a priest to return to his town chapel and put his cassock back on, simpler fetch-quests include delivering frozen pizza to the doorstep of a house in a forest for a meager reward and not much else. These side adventures try to flesh out this world populated by quirky folk, and while they’re genuinely funny in some cases, they often struggle to remain memorable.

Sadly, the same can be said about the game’s story. Starting from a simple premise filled with puns and jokes, it then tries to flesh out the setting’s lore and history, characterized by more serious undertones, but it does so in a way that may be too obscure for its own good. While this may have been a deliberate choice, fit for a ruined world populated by individuals in search of meaning, it also causes some degree of frustration when more and more vaguely connected plot points are uncovered. This means that revelations and plot twists don’t hit as much as they should, and are quickly brushed aside in favor of figuring out where to go next. Major characters often seem too busy talking in riddles to induce much investment in them, raising more questions than answers, which is a bit of a pity since the world’s inhabitants are an interesting bunch. It doesn’t help that the game seems to struggle with balancing its tone when engaging in similarly serious discussions and events: sometimes the skeleton will act nonchalantly, while at other times it will speak in such a solemn way it almost seems out of character.

The presentation on the other hand does a good job of fleshing out the setting. Each area of the overworld is well-defined and stands apart from the others thanks to their environmental elements and roaming enemy types, each rendered in simplistic pixel art. The background music, composed by Elektrobear, adds another layer of characterization to these locales: forests have an aura of mystery, ruined towers retain their creepy vibes, and safe areas feel welcoming and peaceful. These varied tracks tend to repeat, but without losing their appeal. There is no regular battle music, meaning that blows are traded to the tune of mellow overworld themes, a choice that improves the impact of the boss music, which is arguably the catchiest track of the game’s score. Sound design is also on point, with each equipable weapon, skill, and spell having its own audio effect; and the same applies to their animations, ranging from simpler weapon swings to oversized laughing skulls. Character sprites, however, are static during battles but are well-detailed, even though seeing a life-like dog next to a more stylized, two-legged canine holding a shovel may be jarring at times. Conflicts take place on backgrounds that are exclusive to each area as well, so nice-looking pixelized landscapes of swamps, deserts, and battlefields can be expected. 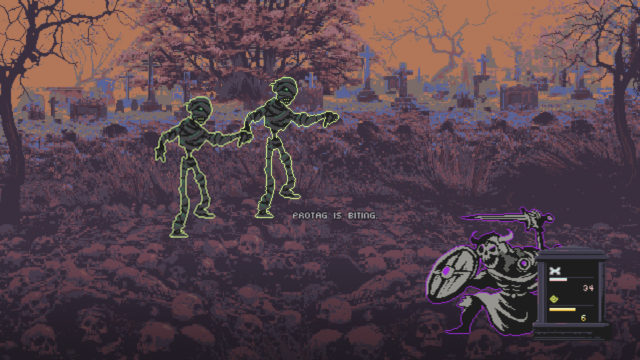 The art manages to bring life to enemy encounters, with backgrounds effectively conveying the illusion of depth.

While Osteoblasts is clearly pushing towards players embarking on many runs, with randomized loot, multiple endings, and six selectable starting classes, other elements seem to work against this goal. The difficulty curve is quite steep in the early hours, while the rest of the game is noticeably easier, and when players manage to find a strategy and build that work for one random encounter, they can replicate it with almost no need for adjustments for subsequent battles, even against bosses. Adventuring and battling in the later areas can then become dull: leveling up doesn’t take many experience points, so fleeing becomes the increasingly more attractive option to resolve random enemy encounters since both escaping and defeating get rid of the foes visible on the overworld. The presence of performance issues doesn’t help either, with noticeable freezes taking place recurringly throughout the game at the time of this review. The game does allow to save everywhere, so the impact of these hiccups is not as severe as it could be, but it’s still noticeable enough to sour the experience somewhat.

Osteoblasts is a dungeon-crawler that certainly doesn’t lack in originality, but is held back by the execution of some of its ideas. Players can expect a combat system that is deep and allows for many options, but that may grow tiresome when realizing that not much deviation from a comfortable build is needed to progress. Characters can be slightly endearing at best and forgettable at worst, something that the obscure plot doesn’t help much with. Osteoblasts starts with the right ideas and manages to keep up a good pace for a while, but stumbles a bit before the finish line. A single playthrough of the game doesn’t last that long, clocking in at around 9 hours, but multiple runs may cause the journey’s bumps to stick out even more, making replays hard to recommend. 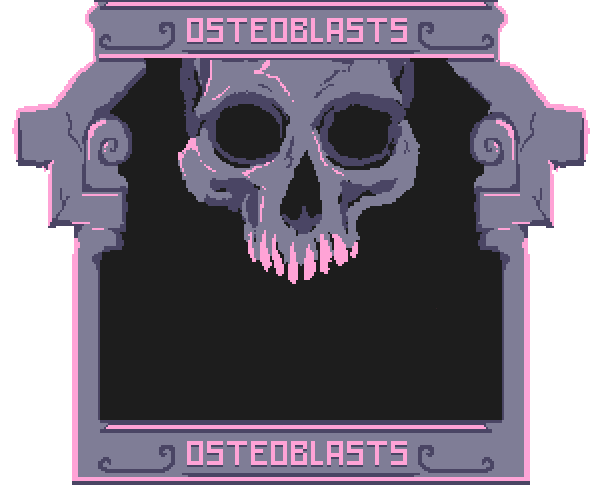