For those RPGamers who played a Nintendo handheld system between 1995 and 2005, it was hard to browse any selection of RPGs without encountering a monster-collecting game. Back then, it felt like every developer was trying to catch ’em all. Into this genre, which has faded in scope from its heyday twenty years ago, VEWO Interactive debuted Nexomon a few years back, first for mobile, then PC, and finally consoles. Nexomon is a much prettier version of the games that proliferated around the turn of the century, but the gameplay is so very much reminiscent of those titles.

Nexomon opens with a voice-narrated explanation of how the game world has come to be the way it is, with humans and Nexomon coexisting after battles that raged long ago. All seems right in the world for a moment, but of course that’d make for a boring game, so an evil Nexolord comes forth, determined to revive ancient evils. As JRPG tropes dictate, soon enough players are thrust into the role of a Nexomon tamer that’s tasked with saving said world. While much of this first entry in the series involves traveling from town to town and defeating the evil Nexolord’s local overseers, there are enough small plot turns, reincarnated Nexomon champions, and ancients back from the dead to keep the plot moving forward without being overly rote or stale. While the main protagonist is silent, Atlus, a companion robot, travels along narrating and commenting on events and making hilarious but all-too-infrequent jokes. 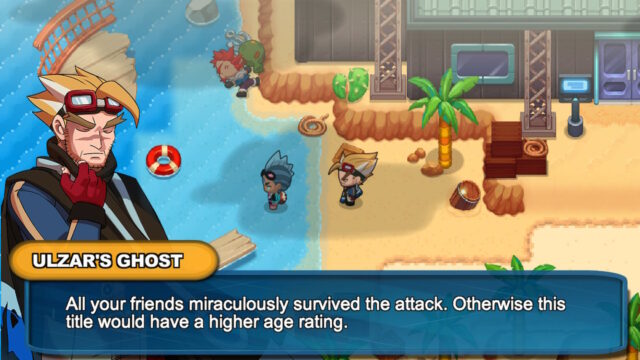 There are a few humorous moments, but more would be appreciated.

At the heart of all good monster-collecting RPGs are of course the monsters themselves. Here, Nexomon shines with a wide variety of well-designed creatures. Most are elemental versions of terrestrial animals that are artfully designed, with a few anthropomorphic objects thrown in for good measure. All Nexomon belong to one of seven types and evolve as many as two times as they gain experience. They learn up to twelve battle skills, of which only four can be active at any given time, but the game conveniently allows players to switch which four easily through the menu when not in battle. Nexomon type matchups play an important factor, with each of the six elemental types being strong against two other types and weak to two, while the seventh neutral type has no strengths or weaknesses.

Battles are traditional turn-based affairs where Nexomon compete in one-versus-one combat. Players’ Nexomon always attack first, giving them a slight advantage over their opponents. When battling tamers with multiple Nexomon, however, this advantage is nerfed a bit in that when players defeat an opponent’s Nexomon, the replacement the tamer puts in immediately gets a strike. Too often, Nexomon will make a killing blow only to be defeated immediately thereafter. When battling tamers with Nexomon of similar levels, the challenge is so great that often only a single Nexomon is left alive at the end. 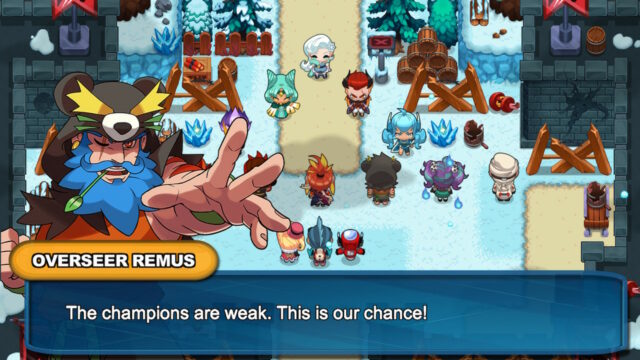 He’s not wrong, Nexomon isn’t too challenging a game.

Skills in battle consume a limited supply of stamina, and Nexomon take a turn to rest if their stamina is used up, however this is a rare occurrence as even without advantageous type matchups, battles rarely last more than a couple of turns. Status effects play a big role in battles, and few, if any, Nexomon are immune to their effects. Skills like binding, confusion, and paralysis seem to connect far more often than their listed 20% – 25% success rate and can turn even huge boss battles into nothing more than a stress-free skirmish where the boss never even gets to attack. Overall the battle system shows quite a few areas for improvement in future titles.

Another area for improvement is in the catching of wild Nexomon. Players have regular and golden nexotraps. Regular nexotraps either work or don’t and there’s no in-game explanation about how to increase their effectiveness (either by lowering opponent’s HP, inflicting status effects, etc.) while golden nexotraps are 100% effective. There exists nothing in between these two extremes.

Outside of battle, Nexomon again doesn’t choose to stray too far from the titles it draws its inspiration from. The 2D world can be easily transversed, although there’s little to do but to go from town to town, battling and collecting Nexomon along the way. There are a variety of different locales, and fast travel opens midway through the game, but there’s little to no reason to use it as nothing new happens in places already visited. The hunt for a handful of optional key items such as skates to move faster, repel spray to avoid encounters, EXP Share, etc. provides the only impetus to look everywhere. 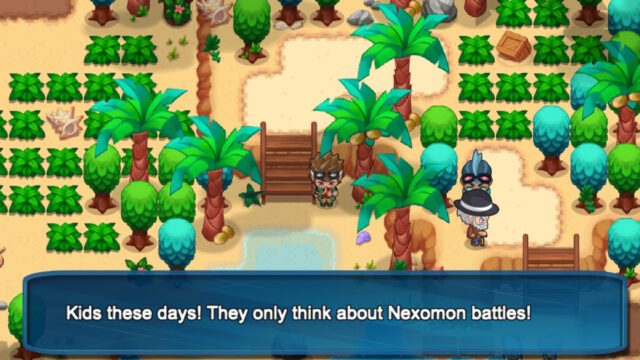 Not quite sure that’s all they think about.

Visually, Nexomon is quite beautiful. While the animations on the Nexomon in battle are just a few frames of movement, the Nexomon themselves look great and are artistically designed in a lot of fun ways. Both the overworld and battle backgrounds really pop with color and lots of tiny details that make the environments feel lived in, such as a discarded plastic bag floating in the sewer or a bicycle leaning outside a house. While the look and feel of the game is one that harkens back to GBA days, it does so with nearly HD quality, letting you know the homage is there, but that the developers cared about quality. The same can also be said for the soundtrack. While it won’t blow players away, it’s far more pleasant than the chiptunes of old.

Overall, Nexomon is just a good, solid monster-collecting RPG very reminiscent of many turn-of-century titles. It pays homage to the inception of the genre, though sometimes it clings a little too heavily to those roots. Players looking for a short romp that doesn’t overstay its welcome will want to pick up this title before tackling the sequel, which has many gameplay improvements that would be sorely missed when returning to the original.