Once a thriving nation, a portion of Japan has been taken over by the living organism known as the Jail.  Sunk 666 meters beneath the ground, it is a place where humans are tortured non-stop, and hope is fleeting.  Mary Skelter 2 unveils a new story into this scenario of agony and despair, in a quirky dungeon-crawler that will throw sadistic challenges at the player as they attempt to discover the secrets behind what the Jail actually is.  Not quite sequel and not quite prequel, Mary Skelter 2 presents a mystery for those who’ve played the first game on Vita — and invites those who haven’t to partake of both the first and second title in one handy package.

Players can expect to spend ample time in combat in this creepy dungeon-crawler.  The main character Otsuu and her party of Blood Maidens are seeking a way out of the Jail while enemies, known as Marchens, roam around abusing humans and challenging the progress of the party.  When splashed with Marchen blood, the girls slowly build up their blood meters. When this meter is full, each Maiden can launch into massacre mode, gaining additional powers, such as new elemental attacks. However, dungeon crawling is stressful and the girls will be increasingly corrupted as time passes.

If a party member has too much corruption when they max out their blood meter, they may transform into a different form: Blood Skelter.  In this mode, the girls lose most of their clothes and do incredible amounts of damage, but cannot tell the difference between friend and foe.  Only Jack, the lone male character, can restore the sanity of these wayward girls; however, his calming effect comes at a cost, as Jack’s mental state is fragile and relying on him repeatedly can throw him into Ripper Jack mode.  Much like Blood Skelter, when enraged he cannot tell the difference between the party and enemies and will attack anyone.  Managing Jack’s mental health and the girls’ corruption is an important part of combat and ensures it never becomes stale. 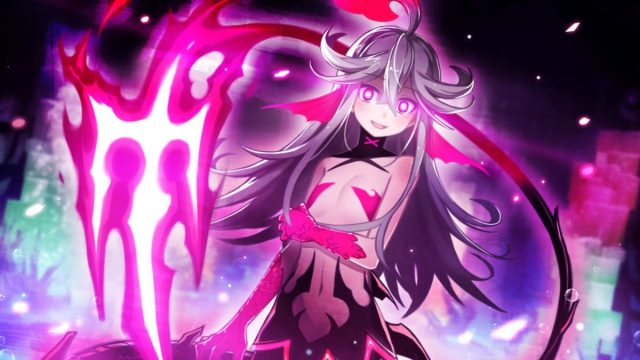 Blood Skelter is both beautiful and terrifying.

As the party explores the dungeon, the ladies need to keep their eyes open for a variety of traps and gimmicks and a terrifying foe: when white clouds form, a Nightmare is nearby.  Nightmares are endlessly regenerating boss monsters, and are best avoided.  If a Nightmare spots the party, a chase begins, during which players can opt to fight the Nightmare to temporarily disable it.  The goal is to get far enough away from the Nightmare for it to lose interest, which grants an item reward on top of the prize of survival.  At the end of each section of the Jail, there is a regional core, and destroying it will make the area’s Nightmare weakened with no ability to regenerate.  However, prior to the destruction of each region’s core, Nightmares are incredibly scary, with tough attacks that can easily wipe a party already ground down by random encounters.

Every enemy, including bosses and Nightmares, are associated with a specific element and exploiting their weaknesses is crucial to scoring extra damage.  Also, players can take advantage of the new Kagome-Kagome feature by repeatedly attacking the same enemy, which can turn them backwards and causes them to take more damage, especially from critical hits.  The encounter rate is well balanced, with items and skills that can increase or decrease the number of enemies the party will face.  Using all these mechanics to their fullest is important to taking down progressively challenging enemies.

There are ten characters to recruit, with five in the active party and the other five acting as support.  When Blood Maidens level up, they gain CP, which can buy new class abilities.  With five classes to unlock per character, which overlap between the girls, the party is no longer dependent on particular character combos from the first game.  Each party member can learn and equip any skill from any job unlocked, so choosing jobs boils down to which stats the player prefers or the outfit most preferred for each girl; being a harem dungeon-crawler, naturally the less clothes a girl has on, the more powerful she is.

For those looking to maximize their party’s power, Blood Devolution permits a party member to be reduced in level while retaining a portion of acquired CP.  This allows additional CP to be accrued as the girl re-acquires lost levels and more skills to be unlocked.  Blood packs, new to the series, drop from enemies and from blood farming, and allow each character to specialize with additional skills that would not be otherwise open to them. It’s a great way, for example, to teach healing to a predominantly physical class, or allow a water-based character to learn basic air or earth attacks.  While not necessary, this high level of customization throws the doors wide open in terms of strategies, whereas the first game on Vita had fairly strict requirements about who needed to be in the party. 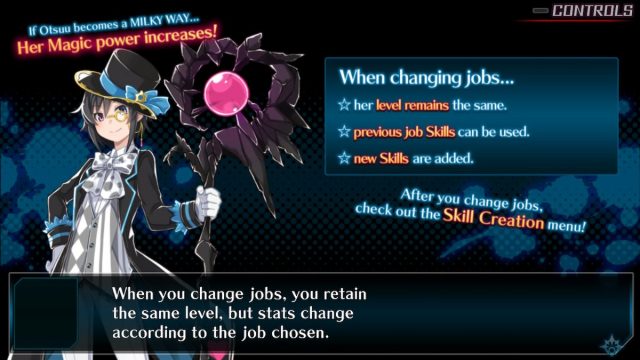 The game’s level of challenge can be altered in a variety of ways.  First are the difficulty levels: Easy reduces enemy stats and shows the mini-map at all times; Normal is the default mode of the game, and disables the mini-map when being chased by a Nightmare; and Hard increases each enemy’s stats and continues to disable the mini-map when the party is being chased by each region’s Nightmare.  As each dungeon is replete with obnoxious trap mechanics known as Gimmicks, from flamethrowers to gaps in the floor and more, losing the mini-map is a frustrating problem.  For those wishing to tweak the difficulty further, the new Jail Trial system allows additional flexibility, allowing players to customize different penalties and boons.  These can be everything from incurring additional damage in exchange for increased drops, to reducing specific stats to raise others; how the player builds their party can greatly alter which of these trials can help bolster their roles.  Players can also customize the lottery wheels that activate when the Jail’s desires (hunger, desire, sleep) are met with new and unique bonuses that cannot be acquired any other way.  Fulfilling the three desires is another part of management that makes what could otherwise be a slog through a dungeon instead have plenty of spice. All of this may sound complex, but the majority of these elements are introduced at a very manageable pace, one at a time over the game’s first few hours.

When not exploring the massive jail dungeon, the party relaxes in the new liberated district.  Each Blood Maiden has her own room, where Otsuu can offer gifts as well as items to decorate these rooms.  Raising a girl’s affection level will not only reveal information about their Blood Libido (personality quirks that drive their motivations throughout the story), but also increases the number of attacks unlocked during massacre.  The party can also undertake quests, such as killing certain enemies or going to a specific location.  Equipment buffing returns from the first game, with a new maximum of 20 upgrade levels; this cap can be overcome by equipment that is grown with the new blood farming mechanic.  Players can also plant up to 15 flowers on each dungeon floor, and these plants can grow up into weapons, armour, accessories, blood packs, or items.

The story of Mary Skelter 2 is markedly improved from the first title, including many additional events both in and outside the dungeon.  Not only is it better than the first game, it’s a great story that stands on its own and gives each Maiden needed depth.  Each character is named or themed after a classic fairy tale; Little Mermaid, Rapunzel, Thumbelina, and others will be familiar to many players, while other characters such as Princess Kaguya, Hameln, and Otsuu may be a little less familiar to a western audience.  Each girl feels like her own character, and between the extended cast and canon love interest, players have freedom to pursue any character’s story without affecting the game’s ending.  The localization is by and large excellent, though it does have issues.  Regularly “for” is replaced erroneously with  “of”. There is also a general lack of voice acting.  What is present is excellent and high quality, but it’s only available for the absolute most important story beats, and the silence in other dialogue scenes is jarring because of this. 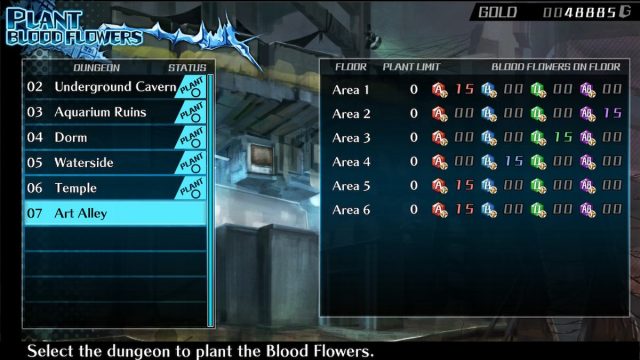 New features like Blood Garden, Blood Packs, and more give additional depth to the game.

On the flip side, the music and sound effects of the game shine due to the lack of voice acting, so not all is lost.  Jazzy pop tracks, reminiscent of the Persona series, keep players on their toes while tapping their toes, and seeing each Maiden stumble through some hilariously awkward scenes with just the right music playing in the background helps support the storytelling.  Graphics are improved over the Vita release of just a couple years ago, though this should be expected with the jump to Switch.  For those that have played the first Mary Skelter on Vita, small details will immediately jump out as not quite right — Nightmare create light zones instead of dark clouds, everyone’s base outfit is white instead of black  — but anyone who opts to play Mary Skelter 2 first won’t be lost, as the two games are intended to be played in either order.