For ten years the world has been devoid of The Ultimate Alliance games. Many thought the series was done until Koei Tecmo and Nintendo collaborated to create Marvel Ultimate Alliance 3: The Black Order. The end result is a fun game that brings together a diverse group of Marvel characters on a mission to stop Thanos’ quest to bring balance to the universe by collecting the Infinity Stones. With a promise to continuously add new content to the game that includes new stages, modes, characters, and costumes, The Black Order looks to entertain Marvel fans for a good length of time.

Ultimate Alliance 3 starts off with the Guardians of the Galaxy discovering a seemingly abandoned Kree spaceship. Star Lord, Gamora, Drax, Groot, and Rocket Raccoon make up the default starting characters, with Rocket and Groot acting as one character. After this opening chapter, the game opens up and starts regularly throwing in new characters to join the party. While the story is pretty basic in design, it accomplishes what it needs to, moving from one plot point to the next with little breaks in action in between. Players are expected to come in well-versed with Marvel lore, due to limited backstories being provided for the large cast, and this allows the game to jump into events quickly. The Black Order offers tons of fanservice such as characters, locations, events, and artifacts that Marvel fans should recognize and appreciate throughout the journey. Granted, those that are not familiar with the characters and the source material might not get the same satisfaction playing this game.

Playing alone with three computers is enjoyable and reliable enough to complete the main campaign, but playing with friends is where the game truly begins to shine. Multiplayer becomes available early on in the form of couch co-op, online, or combination of the two. People can join others as they travel through the story mode, or team up to tackle the Infinity Trials. These trials vary from timed events to boss rush battles and offer rewards depending on how well the goal is attained upon completion. 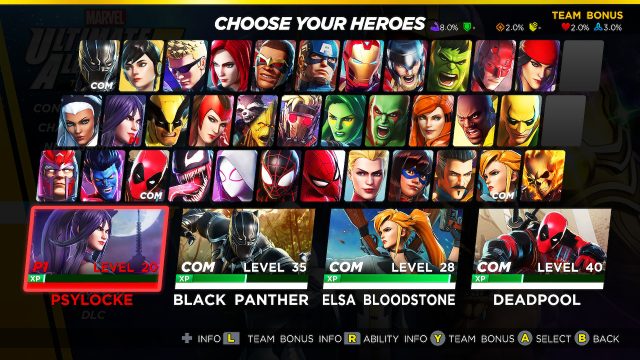 The roster has a wide range of Marvel characters to choose from.

The roster is vast and each character feels unique. Team Ninja does a great job of giving each character abilities that match their powers, such as Wolverine and Deadpool’s healing factor, or Nightcrawler’s teleportation. As enemies are defeated, experienced is gained and new special abilities and equipment slots are unlocked. Every character unlocks four unique special attacks on their way to level twenty. Characters do not level up unless they are deployed into the current party, but experience cubes can be used to increase a character’s level outside of combat.

There are normal attacks that act as a small combo, and a strong attack that helps lower the enemies shield bar. As the game progress, enemies will take less and less damage unless their shields are drained, and if players time attacks correctly, they can stagger enemies and allow for a longer period in which the opponents are subject to a beat-down. For the toughest enemies in The Black Order, however, synergy is key. When using a special attack, there is a chance a teammate will be able to perform a synergy attack to complement it. These synergy attacks are crucial as they deplete the shield bars faster then solo special attacks. The avatar at the bottom left of the screen lights up and by pressing the corresponding special, or by tapping the A button fast enough, two characters will perform their synergy attack. Unique pairings such as Star Lord and Captain Marvel can synergize and create tornado explosions that affects large areas. Miles Morales beats the system altogether with his uncanny ability to self-synergize.

It’s also worth noting that not all characters can synergize, so finding a good balance of teammates is crucial. No team synergy means longer boss battles, and some Infinity Trials have special rules such as synergy attacks being the only method of dealing damage. These trials can be very frustrating if attempted with a sub-optimal party. While selecting party members there is also a team bonus that pops up and displays what bonuses adding the specific characters grant. Try pairing champions that have a stories past for obvious bonuses, or pick characters that have no history together and discover if they synergize on your own. The sheer amount of options, pairings, team attacks, and bonuses available is incredible. 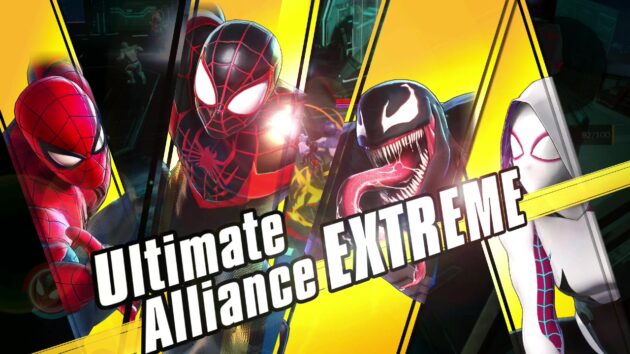 Marvel Ultimate Alliance 3 is still a hack-and-slash game at its core with a difficulty option that can be changed at a moment’s notice. The graphics are vibrant on the Switch, but the game is not pushing any graphical boundaries by any means. While the generic waves of bad guys are forgettable, there is just as large a cast of notable Marvel super-villains as there are playable characters. Marvel Ultimate Alliance 3 retains the classic top-down view of its predecessors, but hidden in the menus in The Black Order is a second camera option that offers a new perspective that is great for solo play. The Heroic camera mode moves slightly behind the player controlled character and the action shifts to a third person view that provides a minor but appreciable change to the feel of combat. While it does not work with couch co-op, it is a perfectly viable option during online multiplayer skirmishes.

There are a few flaws in this game that have yet to be fixed with the routine update patches. The most glaring being some recurring camera glitches in couch co-op mode. The exact amount of hindrance these glitches causes varies, going so far as to prevent players from seeing the action in a boss fight for a minute or more until the camera can be fixed. There are also times where the action button, which causes characters to pick up or interact with objects, can get confused with too many things occuring on screen and display an incorrect prompt.

The music in The Black Order is also generic and none of the tracks tend to stay playing in one’s head after the game is turned off. Thankfully, the voice cast does a good job of adding life to the characters. It’s obvious that the voice actors tried to emulate the actors who portrayed these Marvel characters in the cinematic universe. Eric Loomis mimics the cadence and sarcastic wit that Robert Downey Jr. gives off during his performances as Iron Man on the big screen. For those familiar with the characters as they are depicted in the movies, the cast in The Black Order does a good job keeping the characters acting and sounding how fans expect them to. 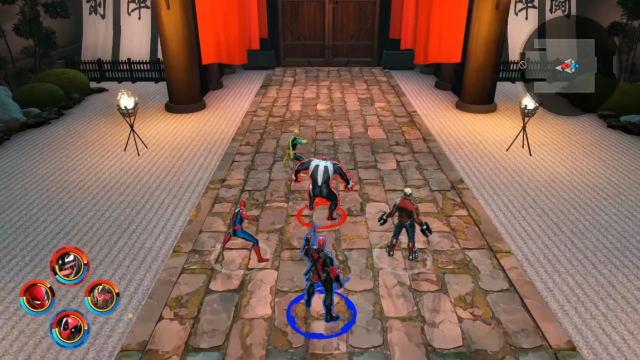 The colors under the characters represent player controlled characters.

The game boasts thirty-six playable characters that come packaged with the base game; most are unlocked as the story progresses while others are hidden behind end-game Infinity Trials. Three expansions have been announced, and by the end of August two free characters will be added to the roster. Team Ninja has stated it is planning to support The Black Order with content and improvements into 2020. When all the expansions are out, the roster should exceed fifty playable characters, which would be the largest cast that has been available in the series.

Marvel Ultimate Alliance 3: The Black Order is a mighty callback that brings back a series that was an afterthought. It is a successful return for the series, boasting strong gameplay and an impressive and growing list of available heroes. There are a few missteps and annoyances, but these do not outweigh the positives features this game offers. The game shines when played with friends, but is perfectly fine as a single player action RPG romp. It is an easy game for Marvel fans to pick up and play, but is also enjoyable to those that might not be as familiar with the characters and settings.