Although RPGs are often a solitary experience, and those on the E3 show floor even more so, there was one title we got to get our hands on this year that was a blast to play in local co-op mode, even if it was only for a few minutes. Marvel Ultimate Alliance 3: The Black Order was playable at Nintendo’s booth, so Harry and I each grabbed a controller and tested our mettle as Storm and Venom, respectively, to experience a tiny sliver of Koei Tecmo and Team NINJA’s take on the Infinity Gauntlet saga.

Though it’s been a fair few years since I played this game’s predecessor on the PlayStation 2, I don’t think much has probably changed in the intervening time. Sure, the Nintendo Switch’s horsepower and an updated roster of characters to better exemplify the Marvel Cinematic Universe made things feel more immediately connected, but at its core the game is a brawler that’s at its most entertaining when there are others in the same room having a blast together. 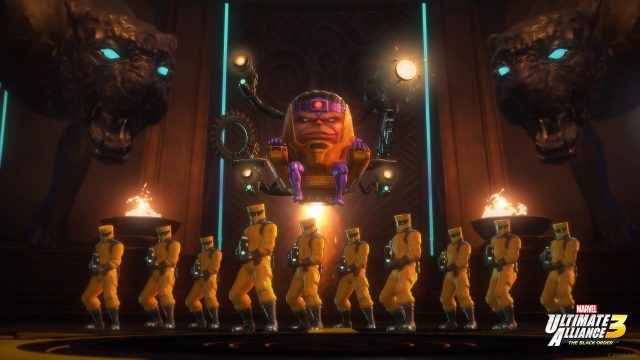 The party consists of four Marvel heroes — or villains — and players can freely choose from the game’s opening roster. Bonuses are applied for choosing characters that go together in certain ways; for example, we inadvertently received the Heavy Hitters perk, presumably by including both Thor and Venom in our squad. Other combinations similarly receive perks, and of course established Marvel teams do as well. It’s important to consider each of the four available slots, as players can freely switch from one character to another during play, with the AI taking over anyone on the sidelines.

Combat is, as would be expected, simple to learn, with a light and heavy attack, and shoulder bumpers to modify face buttons into special moves. Movement is handled from a top-down perspective, with primarily airborne characters like Venom reliably staying off the ground. The only hitch we ran into with navigation was some early confusion on where to go, as the on-screen mini-map didn’t always rotate when we changed directions, making orientation a bit confusing, but that was likely a bug that’ll be worked out before launch. 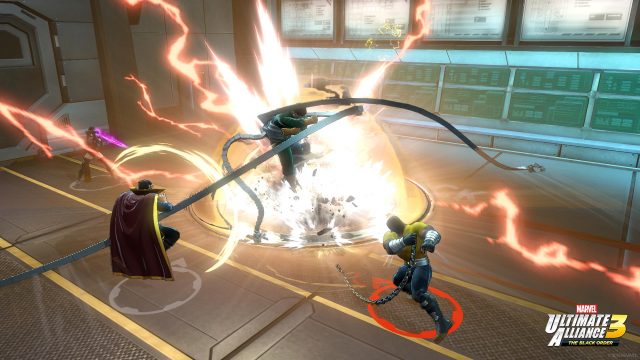 Between four characters, plus enemies, moving about on-screen, combat was generally too chaotic to really get a good look at the proceedings. Character special abilities were flashy, vibrant, and fun to pull off. However, the real stars of the show were the cooperative moves in which two or more of the squad work together. Activating these requires one player to initiate it, and then for all available players to hit the shoulder bumper. Even the AI-controlled characters would join in on these moves every now and again, letting us execute a full squad combination move with our roster of Venom, Storm, Thor, and Star-Lord.

The roster of available characters was decent enough to start with, and there looked to be a good twenty or so characters available to choose from in the demo. Further characters are added to the selection during campaign play; near the end of the demo level, a cinematic revealed classic Iron Fist taking on an army of foes single-handedly. Once the team had joined his battle and wiped up the remaining bad guys, Iron Fist became freely selectable from any S.H.I.E.L.D. contact point.

Marvel Ultimate Alliance 3: The Black Order is inbound exclusively to the Nintendo Switch. The game is releasing worldwide a scant month from now, July 19, 2019.