Raimon: The Next Generation

By the time of Inazuma Eleven 3, the football RPG series was beginning to stagnate despite remaining enjoyable. To help remedy this, Level-5’s next entry saw a ten-year time-skip and the beginning of a new trilogy with a new generation of players. Although the positives and negatives remain largely the same, Inazuma Eleven GO provides a welcoming refresh for the series.

Inazuma Eleven GO takes place ten years after Inazuma Japan found success and uncovered the corruption at the head of the Football Frontier International. Despite this corruption being driven out, junior football’s current state isn’t quite as rosy as might be hoped. A new organisation known as Fifth Sector, headed by the Holy Emperor, now controls junior football and its prestigious national Saint’s Way tournament under the creed that football should be enjoyed by all equally. Its implementation of this creed is rather dubious, believing that the sport should be fully under its control, right down to pre-determined results for each game. It’s up to passionate new Raimon Academy student Arion Sherwind to convince his teammates to join him and spark a revolution within the game.

As it is the beginning of a new trilogy, new players won’t be too left out plot-wise. However, as nearly all of the adult cast are returning characters, former players or otherwise, those who aren’t familiar with the events of the first three games will miss out on a lot of backstory. The same storytelling issues as in the other games are present; there is zero subtlety hinting at plot twists and the overall writing is at the same untaxing Saturday-morning cartoon level, with any potential hurdles often resolved almost immediately. That said, the charm and pure level of craziness that is applied to Inazuma‘s brand of football is still very much present and helps to paint over the foibles. One particular highlight is the iNattr social media network that all the players and coaches post on, which provides a good number of amusing interactions and comments from the cast. 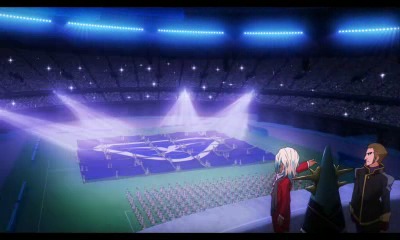 One odd quirk of the localised series is how the main characters all had English names despite still being from Japan. Inazuma Eleven GO‘s English translation mixes it up a bit by making the cast bizarrely international, complete with random foreign words and accents thrown in every other sentence. The voice-acting also retains the generally unimpressive Saturday-morning cartoon level. The eclectic collection of accents is greatly varied in its effectiveness, some coming off naturally with others sounding very forced.

Despite the variable voice acting, the music is still great, excellently using both new versions of series regulars and some new additions. Visual enhancements have also played a fairly significant part in the refresh. The previous Inazuma games were all originally designed for DS, with GO being the first built for 3DS from the start, and it shows. The entirety of the game now uses the 3D models that were exclusively used for the special move animations in previous games and is all the better for it. The UI has also had a bit of a tune-up and the overall result is a much more vibrant treat.

Gameplay is still largely the same, continuing the system of small-sided mini-battles and eleven-a-side full matches, but the system still holds up excellently and there are welcome areas of improvement. The small-sided battles in GO are now five-a-side and initiated by choice rather than the previous four-a-side completely random encounters. The biggest new addition to Inazuma Eleven GO‘s takes on the beautiful game comes in the form of fighting spirits. These spirits can be summoned and provide massive boosts to the player, making them nigh unstoppable for a time. Usually the best way to combat a fighting spirit, apart from attempting to keep the ball out of reach of that player, is to summon one to combat it. It’s an interesting addition that doesn’t alter too many paradigms but does provide an interesting extra tactical facet to proceedings. 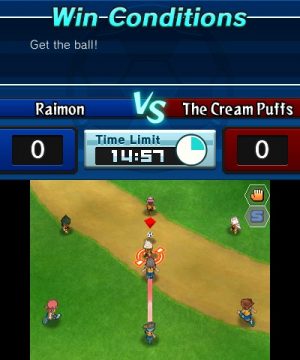 A name that clearly inspires dread in their opponents.

Another significant change is how the game handles its story matches. The game will set small goals, such as getting a player with the ball to a specific part of the pitch before the next plot-related event occurs. It mostly works well, although can get a little frustrating when the opponent is feeling uncooperative. Thankfully, during these sections of the match the clock is effectively paused and opponents are prevented from scoring, significantly mitigating any annoyances and sometimes even helping the player should the opponent AI decide to waste some TP on special moves during them. The slight increase in difficulty put in after the first two games is also thankfully retained, making the matches a bit less of a cakewalk, although experienced players shouldn’t have too much difficulty getting through the story matches without suffering a loss. The game also throws out a few matches in stadiums with special features that health and safety clearly were not consulted on, and while they add another thing to consider they feel more of an unnecessary gimmick than anything, even if the cheap tricks help serve to highlight Fifth Sector’s attempts to control the sport. Overall though, this is Inazuma Eleven‘s gameplay at its most solid so far, and while the rest of the game began to stagnate in the third game, the football itself stayed ever strong and that trend is continued here.

Player recruitment also gets a bit of a revamp. A decent number will still join after a mini-battle, but others can only be recruited by completing a set of requirements first and then going to the appropriate NPC to invite them to join. The requirements usually take the form of recruiting another player first, finding a specific location, or learning of a particular conversation topic. It’s a welcome device to encourage exploration around the various locations, although some may mourn the loss of the other systems like the capsule machines. As with the rest of the series, it should take around twenty hours to complete the story, with plenty of extra content, such as player recruitment, extra competition routes, and online modes to occupy time afterwards should there be a desire to keep playing.

Inazuma Eleven GO sees the series come back to form with a new generation of youngsters ready to take on the Raimon mantel and gives RPGamers fresh cause to engage in its entertaining take on football. Those who weren’t fans of the previous games are unlikely to see anything in Inazuma Eleven GO that’ll change their minds, but fans who getting a little tired of the original cast and systems should find that the game once more successfully injects its winning combination of charm and bonkers.