In 2006, Grandia III was released in North America, and thus far it remains the final game in this venerable series. Game Arts appeared to consciously be trying a remix of the first two Grandia games, in an effort to recapture old glory. The developer’s success in employing this tactic is arguable, but the series staple of consistently captivating combat remains intact, allowing the game’s faults to be excused whenever it comes to killing enemies.

Grandia III‘s story is definitely not among its strengths, though that’s not for lack of trying. Its early portion finds a young man named Yuki, whose desire to fly an airplane overrides all other considerations in his life. Flight does not diminish in importance for him, but it is forced to compete with the needs of a young woman named Alfina, whose journey toward Arcriff in order to fulfill her job description of Communicator has been interrupted by unfriendly attempted kidnappers. The protagonists are likable enough, if fairly bland, but the villains suffer from extreme underdevelopment. It would be acceptable if the game simply threw out antagonists to fight, but most of the rogue’s gallery in Grandia III is introduced and given a few lines that fail to give any background clues, then eliminated. Clichés also litter the narrative, removing much desire to pay attention to the proceedings.

When the characters stop talking, and exploring the environments is allowed, combat against the denizens of lush locales will inevitably ensue. Grandia III‘s skirmishes play similarly to the previous games in the series, with every participant gradually moving along the IP gauge that denotes how close to performing an action each combatant is. Every action, once selected, requires a period of time to carry out, during which it can be canceled by certain attacks, throwing the combatant back along the IP gauge without doing anything. This core Grandia system is the same as the past, and just as addictive to partake of in III. The previous widely-varied ranges for spells and attacks also returns, allowing for strategies that will hopefully take advantage of the current enemy formation before it changes as the combatants move around the battlefield. 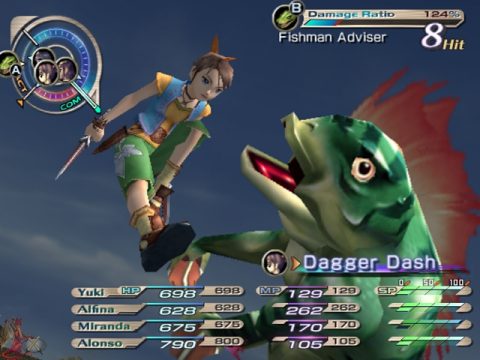 Teach that frog the folly of its ways by giving it air sickness!

There are a few changes from earlier Grandia titles, though. The first is the Aerial Combo, in which an enemy that has been launched into the air and is attacked by an ally before landing will be hit with a more-powerful-than-usual strike. The second is that magic no longer stops all activity on the battlefield while being cast, allowing (in some cases) targets to move into or out of the range of a spell — if the target was already on the move. The third is the means by which a character’s special skills are enhanced, something that now occurs randomly instead of by any definable formula. Sequentially, these changes are enormously entertaining, interesting without affecting much, and bothersome. Learning skill enhancements randomly may be bothersome, but the joy of fighting enemies in Grandia III remains intact throughout, rendering something that could have been incredibly obnoxious only a small bother.

Undoing a system of Grandia Xtreme, III returns magic points that are intrinsic to a character and not the mana eggs containing spells. Where Xtreme required repeatedly fusing the mana eggs themselves over a lengthy period of time in order to facilitate access to powerful magic, III possesses eggs that merely enhance the potency of magic types — with a fusion process that allows access to powerful magic without requiring an enormous time commitment. Aside from this system for unlocking powerful magic and skills, the menus in Grandia III are pleasantly uncluttered. Equipment’s effects are displayed prior to purchase, kitting characters with new material is easy, and the menus are well-arranged.

One area that Grandia III diverges from I and II in (though not so much Xtreme) is its difficulty. Enemies have always been able to hit hard in the series, but III ramps up the challenge by giving grunt adversaries more HP than before. Its most dangerous foes are incredibly fast, getting two or three actions for every one an individual protagonist may make. The challenge is never insurmountable, but it may mandate grinding on occasion to cope with the power and speed of the opposition. This will definitely increase the time necessary to complete the game, which is somewhere around thirty to thirty-five hours sans grinding. 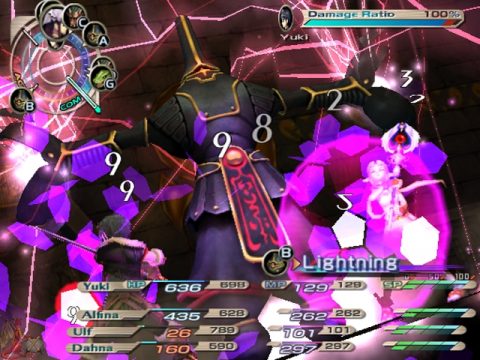 It doesn’t look much like lightning, but it still packs a shocking punch.

Visually, Grandia III shows off some very nice eye candy throughout. The environments look very pretty, displaying impressive detail of which Game Arts’ animators can be proud. Battle graphics move swiftly and are also quite pleasing to behold, with the number of overly extravagant attack animations kept to a minimum in order to let combat move quickly, without sacrificing the presentation’s overall quality.

The aural side of Grandia III is mostly positive, since Noriyuki Iwadare’s knack for composing catchy combat themes remains. Outside of combat the music often disappears in favor of New Age sounds of nature, which is hardly unpleasant, but is not exactly riveting either. As for the voice acting of Grandia III, the cast does its best with material that many high school plays would think twice about performing. The major fault with the voice acting has nothing to do with its quality, and instead lies with whoever decided that more variety in the combat banter was unnecessary.

The plot weighs Grandia III down, preventing players from rushing out to avidly murder more enemies that are hardly defenseless. Even though it’s not exactly a plus, however, Grandia III‘s story offers plenty of elements to mock, and the ferociously entertaining fights it leads to are certainly worth a little sacrifice. Grandia III is not the finest hour of the series, but it shows how much enjoyable combat means to an RPG, and will be a hit with anyone who can focus on that aspect.