A New Day Has Come

It had been eight years since Camelot last made an RPG with the Japanese release of Golden Sun: The Lost Age in 2002. In the interim the company had made nothing but Nintendo sports games, forcing fans to wonder if Hiroyuki and Shugo Takahashi were no longer interested in RPGs. Golden Sun: Dark Dawn stands as an affirmation of their design abilities, demonstrating that the brothers have not let inactivity downgrade their aptitude.

Thirty years after the events of Golden Sun and The Lost Age, the world of Weyard has been enormously altered. The reintroduction of Alchemy has had a great effect upon the planet’s geography, allowing long-forgotten regions to reappear, and even physically altering many people to bring back a race of beastmen. The devices developed and used once upon a time by the ancient civilization of Weyard are now receptive to reactivation, further altering the planet’s structure.

It is against this backdrop that the story unfolds. Matthew, Tyrell, and Karis, sons and daughter of the now-legendary Warriors of Vale from the earlier games, are sent forth to acquire a Roc Feather for repairs on an important device. This quest is made far more important when mysterious antagonists appear with other plans for the group, and an ever-growing band of adventurers will soon step out of their parents’ shadows to achieve their own fame.

This tale is interesting and well-told, with the only caveat being a tendency to repeat information for the benefit of those unfamiliar with the first two games, along with being too talky at times. The former issue is understandable, considering the span of time that has passed since The Lost Age was released, and the latter afflicted the earlier games in the series. Many fascinating plot developments occur in this game without any text, letting visuals tell the story, and this idea works superbly. 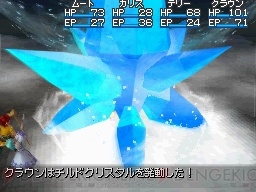 An icy Septuagint one would think to hurt quite a bit.

Combat in Dark Dawn is very similar to the first two Golden Sun games, taking place in a random turn-based milieu superficially similar to many other RPGs. The special attacks weapons can use in battle now need to be unlocked by fighting a little while with the equipment, and characters no longer automatically defend if a chosen target is killed before acting, but otherwise the battles haven’t changed from the earlier games — not that it was necessary. Combat is fun because it is very well presented, moves quickly, and the encounter rate is set at a level just right to allow welcome changes of pace from dungeon navigation. Fighting enemies may not be the centerpiece of the game, but it succeeds in being entertaining by not doing anything wrong and doing quite a few things right.

Dungeon navigation in Golden Sun titles requires plentiful puzzle solving, and Dark Dawn does not disappoint. Rolling logs, moving boulders, boiling water, freezing puddles, burning targets, following scent trails, and more will all be required actions in order to progress through the game. Some of the puzzle types will be familiar from the earlier games, some are new, but all use the touch screen to good effect as a method of aiming. The puzzles of Golden Sun have always made navigating its environments require thought, and Camelot has not lost its knack for making them interesting.

Key to the development of character abilities are the Djinn, which serve essentially the same purpose in Dark Dawn that they did in the earlier games. Each character has a natural elemental affinity, and each Djinni also does, but mixing and matching can produce interesting effects in the realm of character class and attendant statistics. The Djinn can also act directly in battle, or be used to summon powerful beings that will do heavy damage to the enemy — but only if they are not currently affixed to a character, and thus not bestowing significant statistic bonuses. Finding all of the Djinn in the game can be somewhat annoying because of several plot events that render large parts of the game world permanently inaccessible, but aside from that caveat there is nothing in Dark Dawn that did not work in the prior games. 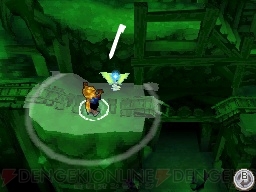 Point that stylus, dosie do, use that Psynergy to and fro!

Aside from the Djinn, Golden Sun: Dark Dawn features plenty of other reasons to explore. Particularly as it nears the end, plentiful optional content is unveiled, and looking around will prove quite rewarding. The game can probably be completed in a shade over twenty hours, but unearthing all the extra materials will add to that time considerably. Difficulty is generally not an issue, as Golden Sun combat will pose no great challenge to veterans of turn-based combat, though an occasional spike in the level of enemies will prevent players from going on autopilot.

Dark Dawn‘s look is clearly derived from its predecessors, and where they pushed the Game Boy Advance hardware, this game pushes the DS. The key difference is that the earlier Golden Sun games were released early in the life of their platform, while Dark Dawn‘s release is near the point when the DS will be replaced, thus Camelot is able to coax great things from it. Battle shows spectacular animations that move quickly (and in the case of summons, can also be skipped), but even outside of combat the attention to detail is captivating. The landscapes and architecture are consistently interesting to behold, and the aforementioned silent scenes are made effective mostly because of the gripping look.

Motoi Sakuraba’s score for Dark Dawn is clearly beholden to the earlier games, as a few rearranged tunes from those games makes clear. His new compositions are interesting and varied throughout, and though some are less aurally attractive than others, the work as a whole is sonically pleasing. The only real downfall of the soundtrack comes from several tracks that are supposed to be the work of real instruments, a fact that is flat-out contradicted by Sakuraba’s trademark synthesizer style: these tracks sound good, but they most definitely do not sound like actual musicians.

Golden Sun: Dark Dawn represents a most welcome return to RPG development from Camelot, showing that the studio has not forgotten how to forge a quality game. The game introduces many new ideas that can easily fuel the series, and stays entertaining throughout, accommodating new initiates and gruntling veterans. Fans have been waiting years for this game, and it delivers the goods in fine form.