Part of a Balanced RPG Diet

God Eater is set in a post-apocalyptic future where beings called Aragami have laid waste to the planet. These creatures operate with a cellular structure unlike anything on Earth, the upshot being that they can evolve at an incredibly increased rate and can regenerate as long as their core cells remain intact. Fortunately, humanity has been able to fight back, utilising the Aragami’s cells against them with large weapons called God Arcs. The organisation Fenrir sends out the God Arc-wielding God Eaters on missions to hunt down and exterminate Aragami.

Players create their own character, a New-Type God Eater who is able to switch their God Arcs between blade and gun forms. There’s a good amount of customisation available, including selecting gender as well as an assortment of voice options, with new outfits available through crafting as the game progresses. Though they are plenty talkative in combat, for the vast majority of cutscenes the character is silent. Resurrection does a decent job of using its regular cast to get around this and still provides the created protagonist with plenty of important action moments, though there are places here and there where it comes off as odd. 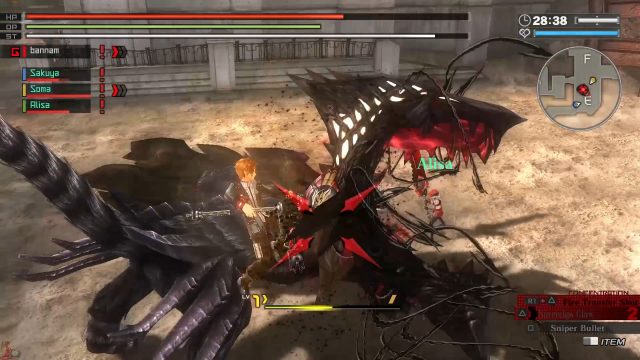 The story comes in three arcs, accumulated over the course of three progressive version upgrades. Although not especially heavy in piling on the cutscenes, the focus given to the story helps makes God Eater Resurrection stand out from other monster-slaying RPG. The individual arcs all wrap up quite nicely, with the two added arcs following certain aspects and unanswered points from the first. The little touches to the narrative are appreciated, with NPCs in the Fenrir Far East Branch changing their responses after every story mission and characters often sending relevant e-mails to the protagonist. The story can get a bit heavy on exposition or technobabble, but for those that find the overall lack of story in the sub-genre a disappointment, God Eater does a good job of providing an engaging one.

Combat in God Eater Resurrection is great. Most will find the very early missions trivial, as the smaller human-sized Aragami pose little threat, though these are helpful to get to grips with the controls and combat features. Where the game really picks up is against the larger foes. These engagements are thrilling, with players having spend almost equal time between avoiding attacks and going on the offensive themselves. The game also strongly encourages the player to go back and forth between melee and ranged attacks. Combat is deep, with features such as unbound body parts, Burst mode, and devouring all adding up and working well under an effective control scheme (which gets a big leap over Burst simply by having access to two analogue sticks). The only major issue in the field is that the camera sometimes feels a bit too close and can be a hindrance, particularly during the chaos of having more than one large Aragami in a tighter area.

Generally the AI does a nice job of assisting the player, though it’s difficult to tell how useful they are in dealing damage. In addition to their characterisation within the narrative, each character also behaves differently in combat, and the player’s choice of allies can prove very helpful in those missions. For example, Kanon is easily the most effective healer, but she has a penchant for causing friendly fire situations. However, certain missions require players to go with a set group, or even on their own, putting a bit more onus on the player to adapt. Players can give rudimentary orders, such as telling their allies to split up or converge on a certain point, however, it would be nice to be able to give more directed orders, particularly on those missions where keeping the larger Aragami apart is pivotal to success.

Combat is aided by God Eater Resurrection‘s robust crafting and upgrade system. Weapon damage comes in three flavours (Slash, Crushing, and Piercing) with four possible elements (Blaze, Freeze, Spark, and Divine) on top of that. Different Aragami are weak to different things so it encourages players to maintain a decent armoury of equipment crafted and upgraded from Aragami parts and to adjust their loadout before each mission. This also applies to shields, particularly in the later stages, as having the right shield can spell the difference between a one-hit KO or losing a much smaller chunk of health. Players can further enhance equipment by adding skills onto each of those weapons using abandoned God Arcs found on missions. New for this remake are NPC personal abilities. These help to enhance both in-combat effectiveness and the rewards players can receive after each outing, with points to spend on these abilities given to those whom players take into combat. God Eater Resurrection also features a bullet designer, where players can program their projectiles with a vast array of options, and it’s a lot of fun to just spend time seeing what can be created in it. 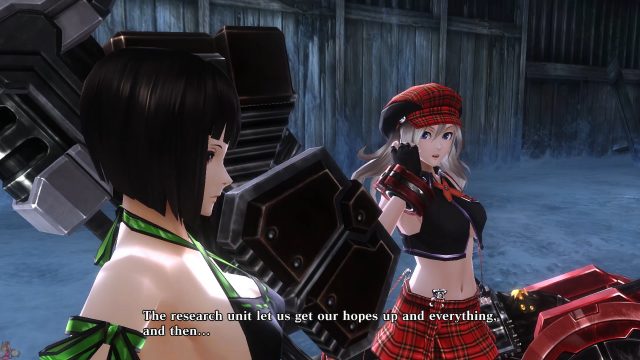 In addition to the one hundred story missions across the three arcs, there are many more optional ones. A lot of these provide some extra challenge to the required missions of the relevant chapter, usually by throwing more large-sized Aragami into the mix. Players can expect to spend a bit over fifty hours getting through all three arcs, although this time can be ramped up considerably for completionists looking to fulfil all the missions or fully upgrade their weapons. Online multiplayer is available for those who wish to bring friends or others in the fray.

The bump up in visuals from the PlayStation Portable releases is noteworthy. The game runs smoothly at a crisp resolution throughout. Palette-swapping is present to an extent, but an acceptable job has been done on the other variants to distinguish them from the base models. Even though there isn’t a huge set of locations, the different combinations of Aragami placed in those locations means that every missions achieves a distinct feel. The locations themselves are all pretty interesting and varied, further working with the theme of destruction.

On the music side there’s hardly any changes to report, though this is far from a bad thing as Go Shiina’s score stands up superbly. Its combination of orchestral, electronic, and rock pieces works against the post-apocalyptic theme with some excellent mood-setting background and blood-pumping battle themes. The only complaint to be had is that this particular remix of the “Over the Clouds” opening theme is overblown and doesn’t really work. The game has been entirely redubbed for Resurrection, with a mixture of returning and new voice actors in the cast. The voice direction is a lot more natural than it was in Burst, with the large amount of contextual chat in battles helping to add to flavour. There are a few less effective deliveries dotted around, but on the whole it is a solid effort and an improvement to the prior release.

In my view, God Eater is the best pretender to Monster Hunter‘s throne, though there is plenty of room for both as they carve out separate niches. As someone who played through Burst originally, it certainly felt worthwhile to replay the game with all the new features and to sample the new third story arc. God Eater Resurrection is both a useful re-entry point for existing fans and the ideal opportunity for new players to get into the series. 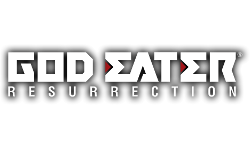